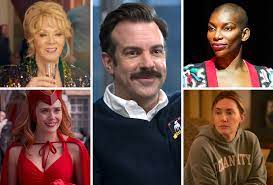 LOS ANGELES –  The Television Critics Association (TCA) announced the nominees for the organization’s 37TH Annual TCA Awards. The 2021 TCA Awards showcase a diverse roster of TV content across a wide array of platforms and genres, spotlighting outstanding creators, series, and stars of the 2020-2021 TV season. More than 200 TCA members, professional television critics and journalists from the United States and Canada, nominate programming available on broadcast, cable and streaming outlets.

The TCA presents awards in 13 distinct categories, honoring outstanding achievements in drama, comedy, miniseries, youth, news and information, reality, and variety, sketch or talk shows, among others. Categories have been expanded this year to feature a total of eight nominees each, with the exception of “Outstanding Achievement In Variety, Talk Or Sketch,” which has nine. Due to the COVID-19 pandemic, the TCA will forego its formal in-person presentation once again. Winners will instead be announced at a later date.

This season’s tallies saw Netflix back in front, boasting a TCA Awards-best 15 nominations. Last year’s leader, HBO, is a close second with 14 nominations; with its counterpart, HBO Max, rounding out the top three with 10 total nominations. Streaming platforms again proved to be a force, with Apple TV+ racking up eight nominations, followed by Disney+ which tied with Showtime’s five nominations. Additionally, Hulu and NBC garnered four apiece; Amazon, CBS, FX, PBS Kids, and Peacock each has three; and Starz earned two. Bravo, Comedy Central, Disney Jr., MSNBC, NatGeo, Paramount+, and PBS close out the nominations with one each.

This year’s nominations roster is dominated by an unprecedented number of first-year programs. Five of Apple TV+’s eight nominations come courtesy of the acclaimed freshman breakout comedy “Ted Lasso,” which leads all nominees. The sitcom’s tally includes nods for Individual Achievement In Comedy for stars Jason Sudeikis and Hannah Waddingham, as well as nominations for Outstanding New Program, Outstanding Achievement In Comedy, and Program Of The Year.

The TCA’s coveted Program Of The Year category is, itself, a testament to the strength of the incoming class, headlined by an intriguing matchup that pits HBO’s “I May Destroy You” and “Mare of Easttown” against the HBO Max dramedy “Hacks” and Disney+’s genre-bending hit “WandaVision.” Tied with four nominations apiece — the second-most among this year’s nominees — the four series also vie for Outstanding New Program. Program Of The Year also features Netflix’s captivating period piece “Bridgerton,” Amazon’s powerful limited event “The Underground Railroad,” Netflix’s stunning coming-of-age drama “The Queen’s Gambit,” and the aforementioned “Ted Lasso.”

“This was an incredible year for fresh, inclusive content and new creators, and our nominations are a reflection of that,” said Melanie McFarland, TCA President and TV Critic for Salon. “The TCA membership selected from a wealth of original offerings that broke fresh ground and presented exciting, thought-provoking experiences that redefined the television landscape. Although we will not be able to honor these landmark achievements in-person, we look forward to celebrating 37 years of the TCA Awards and sharing our top picks when the winners are unveiled.”

Below is the list of 2021 Television Critics Association nominees, excluding the Career Achievement and Heritage Award winners, which will be announced along with the winners later this summer.

Past TCA Award winners are listed on the organization’s official website, tvcritics.org/tca-awards.

The Television Critics Association (TCA) represents more than 200 professional journalists who cover television for publications across the United States and Canada. The members reach tens of millions of consumers each week, and are considered experts within the industry, representing their employers as moderators, panelists, radio/TV guests and more. The prestigious organization honors outstanding achievements in television and enduring contributions to the medium’s heritage through the TCA Awards each year. This year’s TCA Awards are the organization’s 37TH anniversary. For additional information about the TCA, visit www.tvcritics.org; Facebook; and Twitter.