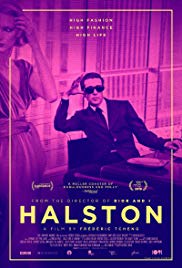 This reporter was pleased to preview Frédéric  Tcheng’s new docudrama HALSTON, which is all set to launch at the Nuart this Friday night.
Please see the link below for her writeup.  On the afternoon of Thursday, May 30th, 2019 she conducted a brief follow-up interview with Tcheng and HALSTON producer Roland Ballester by phone.
https://www.thehollywoodtimes.today/halston-from-class-to-mass/?fbclid=IwAR1h88hoAiNlDDUKwd7940S01Y3vM1DuHj_oTyN5lEwRFWJgZyzOi17GnUY

“Fashion is a convenient canvas upon which to illustrate broader social issues,” asserted Roland Ballester.  While the charismatic  Halston created an intoxicating world of his own as he built his now legendary brand, the designer’s impact upon global fashion and the outside world has yet to be properly assessed.
Unlike many young designers of today, Halston  (born Roy Halston Frowick) cut his teeth in the trenches and gained a deep understanding of women’s fashion needs.  He mingled freely with both his models and women celebrities of all stripes.
Tcheng and Ballester could understand the lure of the Halston “cult” in its heyday, and might have wanted to be a part of it in their younger years.  However, the dysfunction and lack of boundaries that developed later with the Halston enterprise may have dampened their enthusiasm.
Halston was basically a self-taught talent with a fearsome work ethic from the American  Midwest.  His humble roots allowed him to democratize fashion and change its face forever.
The Halston brand has always appealed to similarly ambitious wearers from all walks of life such as Liza Minnelli and Katharine Graham.  Which famous women of today should wear Halston?
Ballester and Tcheng both thought that hyper busy women like Beyoncé and Michelle Obama who must always wear many hats in the public eye would be good “Halstonettes”.  And what about here today/gone tomorrow female entertainment reporters who are earning their keep on red carpets all over the world?
Tcheng never lost interest in the film’s  fascinating central subject despite the many challenges he presented and considers HALSTON to be one of the most inspiring projects he has ever worked on.  He included a wide range of interviews which create a rare sense of intimacy in the interests of comprehensiveness and thoroughness.
While the film documents how much of the Halston legacy was literally erased, it could be thoughtfully reconstructed using materials from family archives.  Halston’s niece Lesley Frowick, who once worked for the company, was able to supply invaluable source materials and behind the scenes 411.
In the final analysis, HALSTON is about freedom. Halston the man was free to rise and fall; free to love men and liberate women.  Above all, he was free to take risks and either reap the rewards or pay the price–for that is the American way!  Halston’s own mother might have agreed.
HALSTON will play for one week at the Nuart in West LA.  Frédéric Tcheng and Roland Ballester will host Q&A sessions on Friday and Saturday (May 31st and June 1st) at the 7 p.m. shows.  The film will be widely released on June 7th and is likely to play for several weeks in LA, so be sure to watch for it!