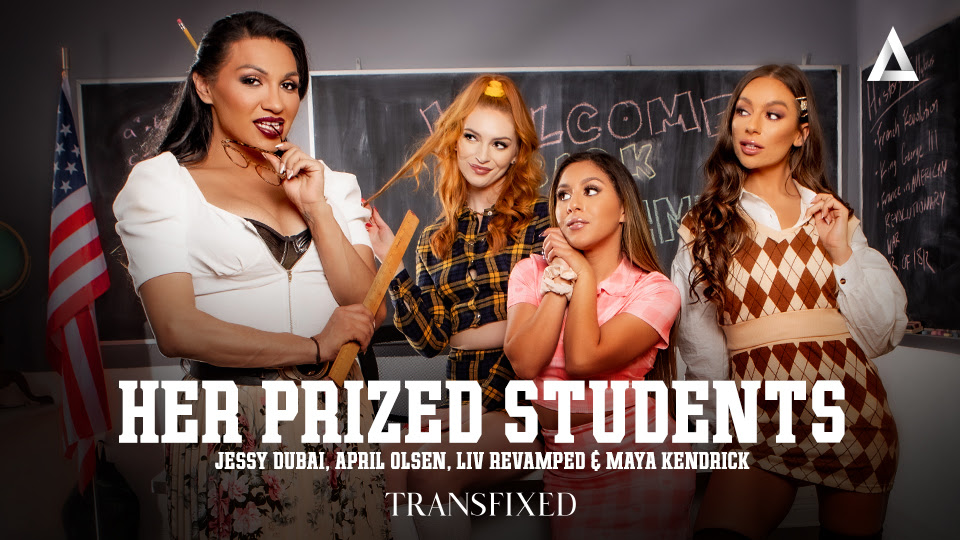 (Montreal, QC / January 12, 2021) — Transfixed gives in to temptation with the launch of ‘Her Prized Students’, a playful four-way romp that features the dazzling debut of Jessy Dubai – ready for landing January 12 at Transfixed.com and on the AdultTime.com streaming network.
Dubai plays a teacher looking to hire an assistant, and interviews three former students (Maya Kendrick, Liv Revamped & April Olsen), who each admit a longtime crush and separately attempt to seduce her. Dubai gives in with little hesitation and indulges their schoolgirl crushes – all at the same time!
“This is my first shoot where I am surrounded by three beautiful ladies,” said Dubai, who returns to Adult Time viewers’ screens for the first time since 2017. “Doing this scene sure is the highlight of my 2021.”
Revamped also raved about the special perks of the high-energy scene. “The cast and the wardrobe were top tier! I’m so lucky to have been able to be a part of such a fun and creative project!”

“This scene was such a joy to be a part of – working for Bree always feels a bit like coming home,” said Kendrick. “I’ve been wanting to work with April for a while, and was ecstatic about this pairing! She was incredibly fun to work with, and her calm energy was so inviting. Working with Liv is always a pleasure, and Jessy was absolutely hilarious and had us laughing all day long. I’m so excited for you all to see it!”

April Olsen said, “Working with Jessy Dubai was such a pleasure, she had us cracking up on set all day with her well-timed jokes. This model, actress, podcaster, etc. could very well add ‘comedian’ to the list—she is a true entertainer! Maya Kendrick also surprised me with her acting chops, and the way she perfectly bodied the role of ‘girl one second away from nervous breakdown.’ It was a talented cast through and through, and I’m just lucky enough to be caught in the middle of three beautiful women.”
“This was such a super fun, Clueless-inspired foursome!” added Director Bree Mills, who also serves as Adult Time’s Chief Creative Officer. “My gratitude to our entire cast and to my co-producer Stella Smut and her fabulous crew for bringing this vision to life!”
Visit Transfixed.com and follow @transfixedcom and @Adulttimecom on Twitter for more info and production news. AdultTime.com members enjoy unlimited access to more than 300 channels, 58,000 episodes and 8 new releases per day of the network’s award-winning brands.
About Transfixed:
An Adult Time Original Series created by Bree Mills,  Transfixed is a celebration of adult’s most beautiful trans and cis female performers in highly stylized translesbian erotica episodes.  The acclaimed first season is now available on the Adult Time platform.
About Adult Time:
Launched in 2018, Adult Time is a streaming service exclusively for adults. Created by award-winning filmmaker Bree Mills, who also serves as Chief Creative Officer, Adult Time is a platform built by fans who believe in a future where mature audiences can safely, securely, and proudly have a place in their lineup for premium adult content.
Dubbed the ‘Netflix of Porn’ by mainstream media outlets, Adult Time offers an extensive catalog of over 300 channels, 58,000 episodes and 8+ new releases per day from some of the most recognized studios, including Girlsway, Pure Taboo, Burning Angel, Fantasy Massage, 21 Sextury and Vivid Entertainment alongside exclusive original series, feature films and much more.
For more information, please visit:
http://www.adulttime.com
Follow on Twitter & Instagram:
@adulttimecom
@thebreemills