What a beautiful and cloudy Friday morning it was at the 2022 Turner Classic Movies Classic Film Festival Hand & Footprint Ceremony where Lily Tomlin was honored.

Sitting in the front row at the ceremony were George Schlatter, creator and producer of Laugh-In and his wife Jolene Brand, Rita Moreno, “Grace and Frankie” co-star June Diane Raphael and her husband Paul Sheer.  Lily Tomlin mentioned her wife and long-time collaborator, Jane Wagner, looked over her shoulder and said she was seated way back there. Tomlin and Wagner have been a couple since the 70’s, and became legally married in 2013.

Enjoy the YouTube video of the entire ceremony, which opens with TCM Host Ben Mankiewicz provided by TCM. 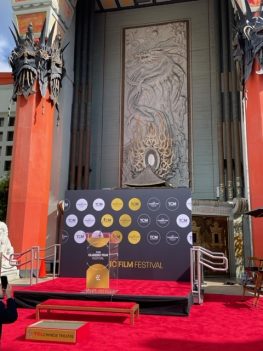 The beautiful TCL Chinese Theatre as the back ground for the red carpeted hand and footprint ceremony and the encased cement where Lily Tomlin will leave her hand and footprints for those that come here to Hollywood to see and appreciate.

The colorful step and repeat with black, white and gold sure blended in with the red carpet and orange pillars. The TCM staff preparing the seats with Reserved gold tags. 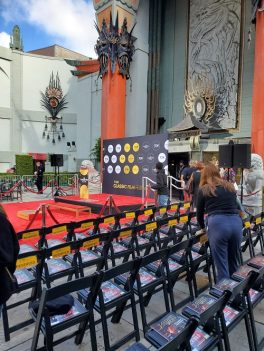 Next was the pouring of the cement and giving it that smooth finish ready for Lily’s hands and her shoe print. Not sure why they call it footprint, but I guess they would need to have shoes unlike their hands actually going into the cement.  It all must be timed right so as the cement does not start to harden before the ceremony begins. 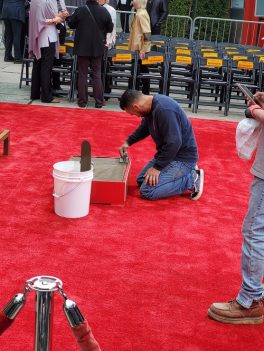 Ben always has great things to say about the person they are honoring and today was no exception.  “Lily Tomlin has brought this wonderful authenticity to her work for over five decades and in an interview with the New York Times told them that she wanted to see her characters that she has played as human beings see themselves in them too.'”  Ben then introduced Lily’s long-time friend and acting buddy Jane Fonda to the podium.

Jane Fonda, with tissue in her hands, told us that she has been crying for some time leading up to this. Jane said “acting is a profession of empathy. You can’t pierce the core of another person and enter her or understand her unless you have a whole lot of empathy.  Lily Tomlin, I think carries an extraterrestrial bag of empathy on her back. There is more empathy than any I have ever met.  That is one of the reasons that her comedy is so different than most comedians, at least the comedy she and her partner Jane Wagner create, is most different. Comedy is very hard, it is a lot harder than drama. It’s hard to make people laugh.  About 99% of comedians make people laugh at the expense of somebody. Never does Lily Tomlin make a joke at someone’s expense!”

Jane introduced her partner in crime Lily Tomlin.  Lily gave such a heartfelt speech about her dear friend Jane Fonda, her long-time partner Jane Wagner and also George Schlatter sitting in the front row.  She talked about how he gave her a shot on Laugh-In.  Next, it is time for her signature and hands in the cement.

She had so much fun, now it was time for her to put those feet of hers into the cement. She even brought a pair of tiny sneakers of her famous character Edith Ann.

I have been to all of the previous hand and footprint ceremonies and I have to say this one was the best of them all as far as genuine laughs, emotions and feeling like I was part of her family.  Thanks to TCM for allowing me to cover this amazing event.  Here are more pictures after Lily was done playing in the cement.

After opening remarks from Ben Mankiewicz and Jane Fonda, Tomlin thanks the major creative collaborators of her career and talks about working with fellow screen legends Rita Moreno and Sally Field on the upcoming movie ’80 for Brady’.

According to The Hollywood Reporter, the story is inspired by a true story and will follow four best friends and New England Patriots fans who will take a trip to the 2017 Super Bowl to see Tom Brady play. The script was written by Kyle Marvin and Michael Covino. Tom Brady will act in the film. As we’ve said before, icons Jane Fonda and Lily Tomlin, who recently worked together in the sitcom Grace and Frankie will also be part of the cast. Alongside them, Hollywood icon Rita Moreno, known for her role in many classics such as West Side Story (1961), will also be acting. And last but not least, Oscar winner Sally Field will complete the cast.  Now this is going to be a great film no doubt!

Here is the finished product.