Hollywood, California (The Hollywood Times) 05/06/2021 – “I have had the privilege of covering the TCM Classic Film Festival for the past 10 years and could never image not being there for them. It was sad not to have been able to cover it in 2020. It was the best decision TCM made, not having one, due to the COVID-19 pandemic. Last years virtual one, was not what I expected it to be, but I have to tell you, this year’s virtual one has already been a winner to me and it hasn’t even started yet”! Judy Shields, The Hollywood Times

The 2021 TCM Classic Film Festival begins TODAY – Thursday, May 6 – and runs through Sunday, May 9, at two virtual venues: the TCM network and the Classics Curated by TCM Hub on HBO Max. 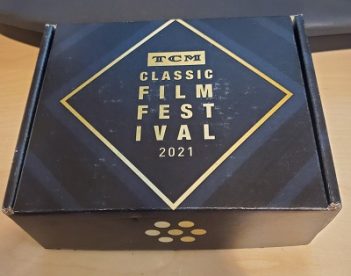 To my surprise, a small gorgeous gold and black box arrived at my home. I opened it up and there was gold wrapping waiting for me to to unwrap whatever was inside.  Wow, there was a cool looking mask, a Media Pass lanyard and this way to cool tin (like the one mints come in) which said “Cocktail Kit – Old Fashioned, with sugar cubes, bitters, recipe card and a tiny wooden spoon. What awesome gifts indeed. I put my Media Pass lanyard on with my mask and I was so excited, as though I was going to the actual Classic Film Festival. I will definitely wear it while I am covering any of the Zoom events on TCM or HBO Max and while watching the many movies that will be showcased.  Thank you #TCMCFF. 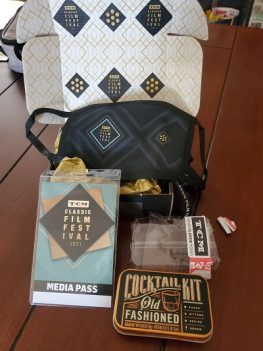 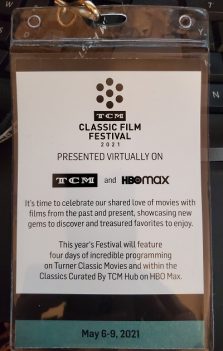 On Monday, May 3rd, which just happened to be my birthday, The Hollywood Times was invited to the TCM Classic Film Festival press junket via Zoom.

It featured George Chakiris and Russ Tamblyn, stars of 1961’s West Side Story, which will be opening the Film Festival on May 6, as well as award-winning actress Jacqueline Bisset (Bullitt), TCM executives and all five TCM hosts (Ben Mankiewicz, Eddie Muller, Alicia Malone, Dave Karger and Jacqueline Stewart). Such an intimate press junket with two other reporters, John Soltes from Hollywood Soap Box and Wilson Morales from BlackFilmandTV on the Zoom call.

There was also a “Meet TCM” Zoom Wednesday evening for #TCMCFF fans to meet TCM host Ben Mankiewicz and other TCM executives to talk shop about the TCM Classic Film Festival and to take questions from fans that tuned in from all over.  There were some excellent questions and laughs to be had. It was nice to see so many wonderful smiling faces on this once in a lifetime Zoom event.

TCM CLASSIC FILM FESTIVAL 2021 which launches TODAY on TCM and HBO MAX (May 6-9).

Fame (1980) airs on TCM during the TCM Classic Film Festival on Sunday, May 9, at 11:45pm ET with an introduction from star Debbie Allen.

Clip: Lisa Rinna discusses A Star is Born at TCMFF

A Star is Born (1954) is available on HBO Max starting on Thursday, May 6, beginning at 8pm ET and available through the weekend for the TCM Classic Film Festival, featuring a conversation with actress and entrepreneur Lisa Rinna.

Goodfellas (1990) is available on HBO Max starting on Thursday, May 6, beginning at 5pm PT and available through the weekend for the TCM Classic Film Festival, featuring a conversation with director Martin Scorsese.

This collection will be on HBO Max starting on Thursday, May 6, beginning at 8pm ET and available through the weekend for the TCM Classic Film Festival. This late 1960s-early 1990s independent film movement was founded by Black film students at UCLA, including Charles Burnett, Julie Dash and Billy Woodberry and features influences by African cinema and Italian neo-realism. Festival Extras for this collection include a conversation about the L.A. Rebellion with TCM Host Jacqueline Stewart and filmmakers Billy Woodberry and Charles Burnett

Clip: Jet Jockeys in Love: The Making of Chain Lightning with Craig Barron and Ben Burtt

Chain Lightning (1950) will be on HBO Max starting on Thursday, May 6, beginning at 8pm ET and available through the weekend for the TCM Classic Film Festival. Extras to the film on HBO Max will include Jockeys in Love: The Making of Chain Lightning with Craig Barron and Ben Burtt.

Opening Night of the TCM Classic Film Festival will be a 60th Anniversary Screening of West Side Story with stars Rita Moreno, George Chakiris and Russ Tamblyn. The Opening Night event premieres on both TCM and HBO Max on May 6th at 8pm ET.

Bullitt (1968) will air on TCM on Saturday, May 8, at 5:45pm ET. It will also be available on HBO Max as part of the Essentials collection starting on Thursday, May 6, at 8pm ET and available through the weekend for the TCM Classic Film Festival.

Thursday, May 6 through Sunday, May 9 at two virtual venues: the TCM network and the Classics Curated by TCM Hub on HBO Max.

Turner Classic Movies (TCM)  is a two-time Peabody Award-winning network that presents great films, uncut and commercial-free, from the largest film libraries in the world highlighting the entire spectrum of film history. TCM features the insights from Primetime host Ben Mankiewicz along with hosts Alicia Malone, Dave Karger, Jacqueline Stewart and Eddie Muller, plus interviews with a wide range of special guests and serves as the ultimate movie lover destination. With more than two decades as a leading authority in classic film, TCM offers critically acclaimed series like The Essentials, along with annual programming events like 31 Days of Oscar® and Summer Under the Stars. TCM also directly connects with movie fans through events such as the annual TCM Classic Film Festival in Hollywood, the TCM Big Screen Classics series in partnership with Fathom Events, as well as through the TCM Classic Film Tour in New York City and Los Angeles. In addition, TCM produces a wide range of media about classic film, including books and DVDs, and hosts a wealth of material online at tcm.com and through the Watch TCM mobile app. Fans can also enjoy a TCM curated classics experience on HBO Max.