Photos by The Hollywood Times

Hollywood, California (The Hollywood Times) 04/21/2022 “Unlike the other host, I like the virtual festivals better (laughter erupts), obviously it is incredibly exciting to be back.” Ben Mankiewicz said.

I have not been back to Hollywood since 2019 for the last in person TCM Classic Film Festival. It was nice to be able to see all the host and catch up with them and to see other media friends.

There were delicious finger foods and drinks to enjoy at the welcome back reception at the Hotel Roosevelt main ballroom.

TCM Network General Manager Pola Changnon welcomed the media back and was so excited to see us all there. She asked the five host sitting up on stage with her what they were looking forward to at this years festival starting with Eddie Muller, who said he was thankful that TCM allowed him to host the Doris Day event, because he is such a big Doris Day fan.  He did a preview with all the women involved and he wished that they had recorded that conference call because it was great. Next up was Jacqueline Stewart who said this was her first in-person festival and she liked the theme of the festival, this is a reunion and she is looking forward to her conversation with the cast of Colley High, which some of them have not seen each other since the making of the film. Dave Karger said he was looking forward to introducing Fast Times at Ridgemont High by the pool with Topher Grace, who just happens to be life long friends with one another.  He also said he never misses a silent film with a full orchestra that Eddie is introducing on Sunday night and he would definitely be in the audience for that. Alicia Malone said that it is extra special to be in the dark with strangers and the TCM audience are the best in the world because they are so engaged.  She also said she would not be able to see Jewel Robbery Thursday night and she knows that it is a hot ticket for many people, William Powell and Kay Francis, with William Powell handing out some funny cigarettes that made everyone laugh, that’s a great scene.  Eddie mentioned that it was being shown on 4/20, lol. But she will be watching Queen Bee with Joan Crawford with the fun crowd.  Last but not least Ben Mankiewicz, who as not at all happy with Dave because Dave did not come up onstage with a beer, as did Ben. Ben said Dave betrayed him and that it was his second beer since 1997, lots of laughs. Dave even got up to grab himself a glass of wine.  Ben then said “unlike the other host, I like the virtual festival better.” Huge laugh! “Obviously its incredibly exciting to be back and Eddie finally got something right with that adrenaline rush, it came back quite instantly. It’s exciting to be here to talk to all of you and all the fans.” He also said that he is looking forward to interviewing Steven Spielberg at the Opening Night film, E.T. and lots of great interviews.  He stated that in the ten years of doing these festivals he has only seen two movies in their entirety, Nitrate Noir and he said the intro sucked (more laughter) and Airplane, with a packed house.  He is looking forward to interviewing Bruce Dern.  Ben told us a little story about Bruce Dern. That Bruce used to run from Malibu to the Queen Mary in Long Beach and Diana Ladd would leave coca colas along the 47 mile route and when Bruce was finished with the run he would wimp out and get a ride back, LOL.

This year’s Festival theme is “All Together Now: Back to the Big Screen” in celebration of their return to Hollywood. 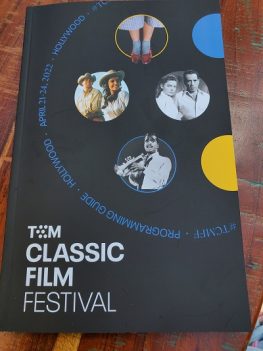 The Programming guide is so colorful and elegant.  With a welcome message when you open the booklet as follows:

WE ARE EXCITED that you are joining us for our long-awaited return to the heart of Hollywood, a four-day celebration of timeless classic movies, conversations with special guests, informative panels, and much more. We hosted our inaugural Festival in 2010 with a mission to bring film lovers together and we continue to carry that spirit forward, 12 years later. As our beloved host Robert Osborne once said, “There is nothing quite like seeing a great film up there on a mammoth screen and sharing that experience with an auditorium full of like-minded cinemaddicts.”

We invite you to use this program guide to help you make your Festival experience unique and memorable. Be sure to download the free Festival app to your mobile device for up-to-the-minute news and updates. Thank you for joining us, whether for the first time or the 13th. Enjoy the show! – YOUR FRIENDS AT TURNER CLASSIC MOVIES 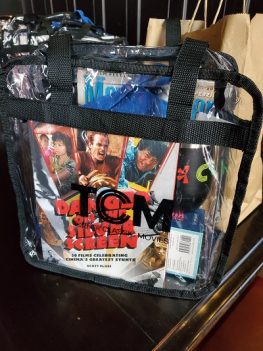 We got a nice useable see through carrying bag with TCM on it and inside were awesome gifts: 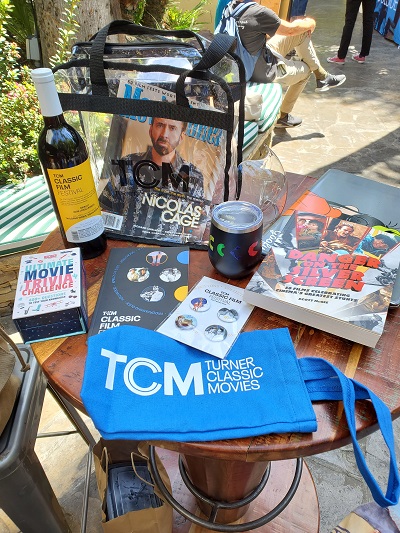