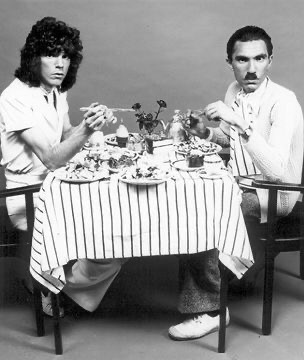 Los Angeles, CA (The Hollywood Times) 6/22/21 – Incongruity is nice. This was my first time out to a movie with the missus since the attack of the Covid Monster. So, we trekked out on Father’s Day to an empty theater in an empty mall that – in bygone days – would have been choked with consumer mayhem.

With the onset of Covid, band documentaries began littering the ground like falling leaves. In an era of non-existent record sales and an indefinite embargo on live performances, music junkies were left stranded in a wasteland of streamed concerts performed in virtual bell jars and half-baked rockumentary curios; all designed to keep the non-essential commodity of popular music in the brain stream. 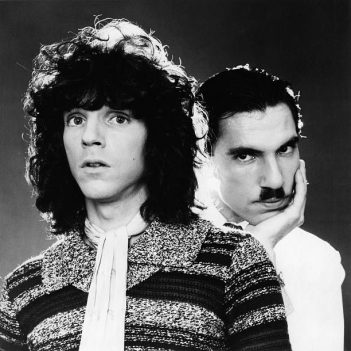 Binge watching the rock music of my youth on YouTube had become my happy place when I caught wind of The Sparks Brothers documentary. Another band bio to toss on the heap; except this one was directed by highly regarded filmmaker Edgar Wright (Baby Driver, Shaun of The Dead). Moreover, knowing Sparks as an uncompromising band immune to crass commercialism, I expected a well-crafted, sincere work. I wasn’t disappointed.

Remarkably, the movie earned theatrical release and was playing at my local AMC mega-plex in the hard right country music enclave of Thousand Oaks; a happenstance too strange to contemplate, and too irresistible to ignore.

Sparks is a band that boomer aged music fans might remember from the early 70’s as a blip on the Billboard radar screen. Another in a line of American acts too creative or offbeat to blossom in their homeland (see Scott Walker, Jimi Hendrix, The Stray Cats, Chrissie Hynde etc…). Sparks left America and two failed LP’s behind to become glam sensations in Britain; climbing to Number 2 on the charts with the epic 1974 single, “This Town Ain’t Big Enough for The Both of Us”. The band got a big push from Island Records and could be spotted stateside on shows like Don Kirshner’s “Rock Concert” and American Bandstand. They made an impression and critics either hated them or were intoxicated by them. Very view understood them. 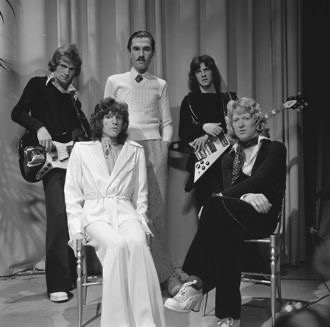 For the hard-core Sparks fan (there is really no other kind), the film is a banquet of witty interview spots, archival still photos, creative stop-action animation and long forgotten video bites from an era where music was good and mattered a lot. Fame was acquired the old-fashioned way, relentless touring, publicity junkets and good records. Edgar Wright’s film brings this era gloriously to life by saving the color cinematography for the band and its music; consigning celebrity talking heads (Michael Myers, Patton Oswalt, Jane Weiland, Weird Al Yankovic…) to black, white and gray. Somehow, all 25 Sparks albums are referenced in the film.

For those not familiar with Sparks, the film is an opportunity to view the case study of a workaholic band who wouldn’t compromise or go away quietly. Front-man Russell Mael is certified Rock idol possessing God-given charisma and the only voice capable of handling brother Ron’s jittery, misanthropic anthems of self-deprecation, rancor and humor. Ron Mael writes the songs, plays piano and famously sported a Charlie Chaplin mustache that will forever be conflated with Hitler’s. Two likeable oddballs glued together by blood and fate, navigating a world changing faster than art can imitate. 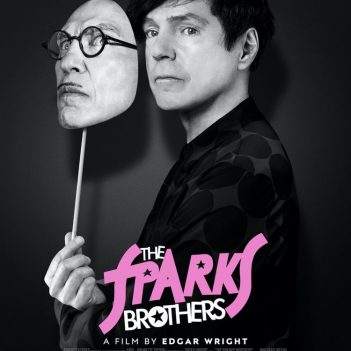 There are ultimately no happy endings in life, but The Sparks Brothers gives us one for the moment. Ron and Russell are two opposite sides of the same coin. Living good and consequential lives; eschewing the comforts of marriage and children to fully immerse themselves in music, art and agreeable routine. Ron has taken the same morning walk through his neighborhood park for 20 years. Russell frequents the same coffee house and orders the same thing every morning 7 days a week. They make records at their Los Angeles home studio oblivious to the rest of the world and its inhabitants. And now, they’re having a third act renaissance complete with top ten records and a lovingly rendered, Oscar-worthy documentary feature. The whole world needs a happy place right now. The Sparks Brothers movie provides one. Maybe music is an essential commodity after all.