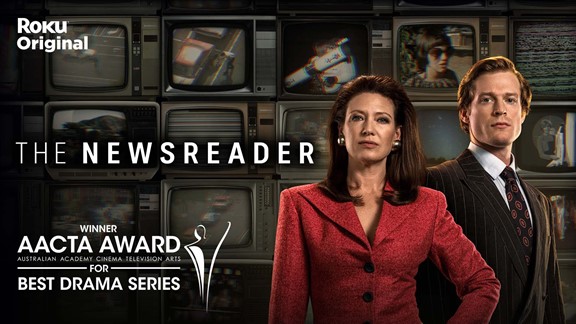 New York City, NY (The Hollywood Times) 3/14/22 – Sit down with some vegemite because here’s a briefing of the Australian show The Newsreader directed by Emma Freeman and written by Michael Lucas.  It’s about an Australian newsroom in the year 1986 and it follows the dramatic lives of reporters from News at Six. 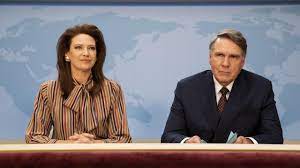 Admittedly, I haven’t watched an Australian show since reruns of McCleod’s Daughters.  There’s something about Australia that feels adventurous to an American like me.  To enter into that terrain of flavorful fun is nothing short of Crocodile Dundee magic.  But putting aside cliches and following the story makes me wonder if this is not an Australian adaptation of Aaron Sorkin’s The Newsroom.  I loved The Newsroom for the most part and The Newsreader does provide a certain personality that we rarely see in American series.

It might be a lived-in quality that makes this likable.  It has less flash and hasty editing than many American shows.  The color quality is sunny and the characters have a down-to-earth complexity.  In less than 24 hours I easily ruffled through this sequence of events that made me both sympathetic and slightly scandalized—but not too much and not in that brutal way Breaking Bad did.  The drama that unfolds is probably more down-to-earth than it is hyperbolized.  With historical catastrophes playing in the background, however, there is a sense of heightened reality.

The show follows Dale Jennings (Sam Reid) as he attempts to land a lead reporting role.  At the beginning of the show the man is shuffled aside continuously as the leading men and woman take the spotlight.  He develops a relationship with the lead female reporter, Helen Norville (Anna Torv), and what follows thereafter is a bumpy road to success.

With a mix of romance and mental mania interlacing the plot, I’m left with mixed feelings of my own.  I’m reminded of the many love triangles seen in every show ever produced, but in this case it involves a questioning of sexual orientation.  We’ve seen these scenarios play out so often recently that I wonder what makes this show any different.  The main female reporter, Helen, has an evident history of mental illness.  For the entire season, she wavers at the edge of a mental breakdown, which is somehow offset by her extraordinary professional abilities.

The male protagonist has struggles of his own and the viewer is constantly staring at his wide open eyes that are threatening to burst with tears.  It is somewhat confusing to know how to view the characters.  At certain moments I’m left admiring their resilience, and at other moments I simply wish they’d take a mental health day. 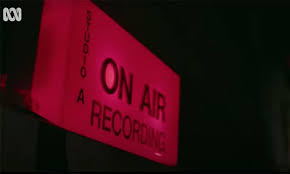 The dramatic events feel one dimensional, leaning heavily into typical tropes.  The show appeals to sympathy and seeks to find camaraderie in character flaws and the need for togetherness.  All romantic magic played out between the two main characters is then watered down as their secrets spill out.  The antagonist is nothing more than a jealous coworker seeking to maintain his limelight.  There are some major events that rise and fall with anticlimax that could have been drawn out for the entire season.

As I mentioned, there is a certain likability to this.  It held my attention, which is due to the strong directing style of Emma Freeman.  Anna Torv steals the scene with her strong and deeply flawed female protagonist.  Sam Reid is fascinatingly complex in his character portrayal.  And much of the script was just insane fun.  Who doesn’t want to observe frantic newsies desperate to get a story out?  The atmosphere is tense and the actors do keep up with the pace.  I loved the quirky chemistry between the two leads.  Plus, that booming voice of William McInnes was both terrifying and awesome.  The hilariously rude comments of many of the news stations’ higher ups had me laughing heartily.  That’s where the talent of the script is hidden.  In the quick one liners and abrasive remarks that in any other world would seem unprofessional.  But for this world and this story, the sarcasm and insults are just another enjoyable spice in the mix up.

It’s a worthwhile watch and one that will continue to hold your attention.  It has won multiple awards in Australia, including Best Drama Series, Best Actress, Best Supporting Actor, and Best Direction.  For me, it is not entirely remarkable, but it does have its moments.  I hope to see more from this ensemble, writer, and director.  And it certainly reminds me that Australia is worth paying attention to for future entertainment.

The Newsreader premiers Friday March 18 as a Roku Original on the Roku Channel.