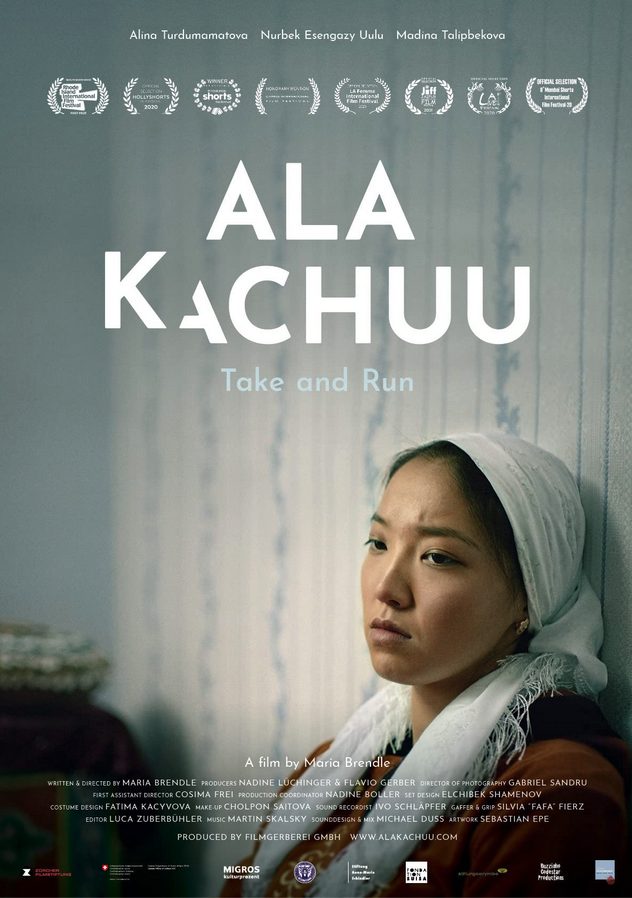 Los Angeles, CA (The Hollywood Times) 9/10/21 – Currently playing at the NoHo Laemelle Theatre in North Hollywood is Ala Kachuu: Take and Run (2020), a 38-minute film directed by Maria Brendle from Switzerland in the Kyrgyz language spoken in the Central Asian mountainous county of Kyrgyzstan. It stars Madina Talipbek as a young woman named Aksana who aspires to go to the university in the capital city of Bishkek and is determined to score high enough on an exam to get a scholarship. She lives in a rural village where she feuds with her mother (played by Madina Talipbekova), who wants to marry her off as soon as possible. Aksana sneaks off and catches a bus to Bishtek where she takes the competitive exam and stays with a modern-thinking friend (Alina Turdumamatova) from her village. She starts working in a local bakery shop to earn money and there she is accosted by a group of young men who abduct her in their car and drag her off into a forced marriage in a rural community.

There are many sayings that the elders use to explain the tradition of Ala-Kachuu, or take and flee, or bride kidnapping. Ala-Kachuu was outlawed during the Soviet era and remains illegal under the Kirghiz criminal code, but the law has rarely been enforced to protect women from this violent practice. But in rural areas, it is still employed as a means of marriage. The women that are kidnapped face being shunned by their community if they refuse to get married to their kidnappers. They are left with very little choice. As Aksana detests her forced marriage to a stranger, she imagines that somehow she might escape. Her new mother-in-law figures that Aksana will get over it and settle into marriage once she has some children: “A stone should stay where it’s thrown.” But Aksana will have none of that. She has other plans for her life. This short film promises hope for the younger generation.

The Kyrgyz Republic is still grappling with the post-Soviet era. There have been two revolutions since its independence in 1991 and things are still not stable. The focus on tradition seems to be how these rural communities function. The government in Bishkek does not seem to be able to get a handle of the problem.

There are many accounts of women starting their lives as educated people with agency that are cut short by their kidnappers. Some accounts are really harrowing. Yet, a documentary made a few years earlier by Spanish director Roser Corella entitled Grab and Run (85 min., 2017) does attempt to understand the tradition. Debates about it are held in classrooms. Victims, wives, divorcees talk openly about how they see it as a necessary practice for the community. Farmers explain that they would never be married if they didn’t kidnap their wives. It is mystifying at times, especially when one particular subject tells her story of her kidnapping, forced marriage and divorce yet still approves of the Ala Kachuu tradition.

Corella’s documentary navigates, for the most part, through many accounts of bridge kidnapping and allows us to see how it’s a genuinely complicated issue. The final sequence of that film really highlights this. A husband and wife talk of her kidnapping. They get on well. They laugh together. He is self-deprecating. We then cut to her kidnapping. She’s in a flood of tears as she’s held by two men. They laugh at her despair. What does one do with this? Do I now approve of Ala Kachuu? Of course not. But everything has its context and Grab and Run is one such story of context (for a seemingly unforgivable act). Roser Corella’s film which can be seen on YouTube won the Best International Documentary Film award at the Los Angeles Documentary Film Festival (DOCLA) in 2017.

Kyrgyzstan has a vibrant film industry that tackles a range of subject matter. The most stunning and expensive epic film from Kyrgyzstan is Queen of the Mountain (Kurmanjan datka, 2014), directed by Sadyk Sher-Niyaz, who is the best-known director from Kyrgyzstan. His film tells the story of the strong-willed, courageous and independent woman before her time, Kurmanjan, who is revered to this day for her diplomacy for saving her nation from complete destruction when the Russians invaded in the late 19th century. The film was submitted as the Kyrgyz entry for the Best Foreign Language Film in 2015. It was not nominated, so Sadyk Sher-Niyak decided that films from most countries in Asia – other than China, Japan, and Korea – get little attention in the United States, and so he started the Asian World Film Festival in Culver City, which offers a huge range of films from the 52 countries in Asia. The Asian World World Festival, traditionally held annually in October has been on hold for two years now, due to the COVID pandemic.  A wonderful Krygyz film entitled The Light Thief (2010) reminds one of the Cinema Paradiso. Bekzat Pimatov’s Aurora (2018) is a clever satire set in a former Soviet sanatorium on Lake Issyk-Kul.