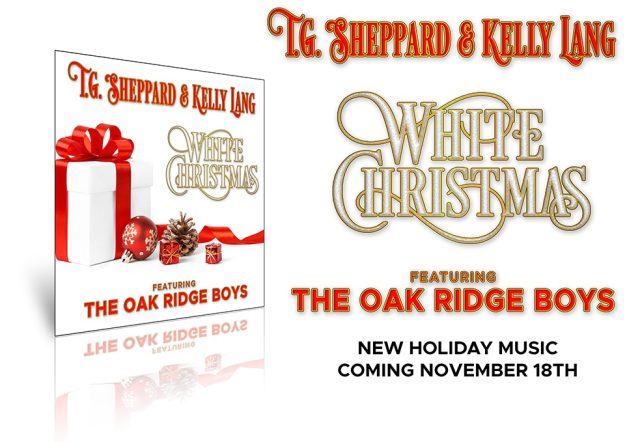 NASHVILLE, Tenn. – Country music legend T.G. Sheppard and singer-songwriter Kelly Lang are excited to announce the release of their version of the holiday classic, “White Christmas.” Joined by Grand Ole Opry and Country Music Hall of Fame members, The Oak Ridge Boys, this fun and light-hearted rendition blends their unique vocal styles, creating an instant fan-favorite that will leave every listener begging for more. “White Christmas” was exclusively premiered by Cowboys & Indians and is available to download and stream on all digital platforms. 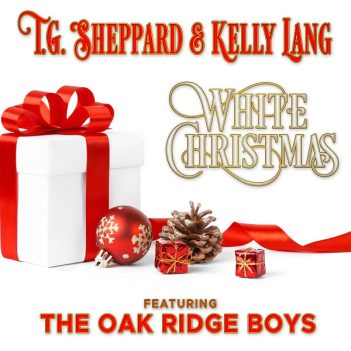 “When one of The Oak Ridge Boys walks into a room it can be exciting, but when they all walk in together, the earth shakes. The earth shook on the day that Kelly and I watched as they walked into the studio to sing on our new duet “White Christmas.” Thanks to The Mighty Oaks for being our featured guests, but more importantly thanks for being our dear friends. We would also like to thank Gus Arrendale and Springer Mountain Farms Chicken for making this single possible.” – T.G. Sheppard & Kelly Lang

“Our longtime friend and brother T.G. Sheppard called and asked if we would sing “White Christmas” with him and Kelly Lang and of course we agreed to do it. Not only do we love them both, but “White Christmas” is probably the most classic Christmas song there is! Overall, it was a great time in the studio and the final mix came out just great. We are honored to be a part of it!!!” – Joe Bonsall / The Oak Ridge Boys

Kelly Lang just released her highly anticipated album, Old Soul II on November 11. Surviving the test of time, Lang’s approach to these thirteen popular classic hits of the 70s and 80s turns back the hands of time to uncover the feel-good intent of days gone by. This collection of hits contains songs from music’s greatest era including “Midnight Train To Georgia,” “Careless Whisper,” “Every Time You Go Away,” and a special dance version of “Missing You.” The music video for “What’s Love Got To Do With It,” was recently premiered by Taste Of Country.

Due to his success throughout the 80s and 90s with a total of 21 #1 hits and ranked among Billboard’s Top 100 Country Artists of all Time, T.G. Sheppard and The T.G. Sheppard Show recently moved from SiriusXM’s Elvis Radio to SiriusXM’s Prime Country. He is currently celebrating the 40th Anniversary of his #1 hit “Faking Love” with Karen Brook which was released in October 1982 and was included on his album, ‘Perfect Stranger.’ “Faking Love” was written by Matraca Berg and Bobby Braddock. Earlier this year, Sheppard also celebrated the 40th Anniversary of his classic #1, “War Is Hell (On The Homefront Too),” which was written by Curly Putman, Bucky Jones, and Dan Wilson and was released on Sheppard’s album ‘Perfect Stranger.’

About T.G. Sheppard:
T.G. Sheppard has always had an unstoppable passion for music. That passion, combined with a steadfast dedication to entertainment, has made him one of the most popular live performers in country music today. With 21 #1 hit songs, his live concerts are chock full of his chart-topping tunes like “Last Cheater’s Waltz,” “I Loved ‘Em Every One,” and “Do You Wanna Go To Heaven.” Sheppard released his latest album, Midnight In Memphis, in 2019. With more than 40 years of show business under his belt, it’s only natural that Sheppard has developed a reputation as a solid performer who delivers exactly what audiences want. All this and more, combined with a steadfast commitment to entertainment, has truly made T.G. Sheppard one of the great legends in country music.

To keep up with future releases, social media, and everything T.G. Sheppard, visit HERE.

About Kelly Lang:
As a songwriter, Lang has had a stellar career with her songs being recorded by artists such as Ricky Skaggs, Lorrie Morgan, The Oak Ridge Boys, Crystal Gayle, George Jones, B.J. Thomas, Jimmy Fortune, Jerry Lee Lewis, TG Sheppard, and Johnny Lee, just to name a few. She has also performed/recorded duets with iconic artists, Sir Barry Gibb, Dame Olivia Newton-John, Paul Shaffer, and Lee Greenwood. As an artist, Lang has released several albums including 11:11, Shades of K, Throwback, Obsession, and Iconic Duets with her husband T.G. Sheppard. In the spring of 202 g re-released her classic children’s album Lullaby Country, which was originally sold at Cracker Barrel. Also in 2020, Lang released a collection of classic hits that she produced called Old Soul. As part of a national campaign, her voice and writing skills can be heard on television with her song “I’m Not Going Anywhere” throughout the United States as the official anthem for the Ascension Hospital commercial. In 2021, she released her autography also titled I’m Not Going Anywhere. Lang’s new album, Old Soul II, the latest installment of vintage hits is available now.

To keep up with future releases, social media, and everything Kelly Lang, visit HERE.

About The Oak Ridge Boys:
The Oak Ridge Boys have sold over 41 million units worldwide and are synonymous with “America, apple pie, baseball, and country music.” In addition to their awards and accolades in the country music field, the Oaks have garnered five GRAMMY® Awards, nine GMA DOVE Awards, and two American Music Awards. The group—Joe Bonsall, Duane Allen, William Lee Golden, and Richard Sterban, members of the prestigious Country Music Hall of Fame (2015 Inductees) and the Grand Ole Opry (since 2011)—is known worldwide as one of recording history’s most extraordinary musical successes. They have charted single after single and album after album, celebrating two double-platinum albums and more than 30 Top 10 hits, including No. 1 chart-toppers “Elvira,” “Bobbie Sue,” “Thank God For Kids,” “American Made,” and “Y’All Come Back Saloon,” among dozens more. For more information and to view upcoming tour dates for The Oak Ridge Boys, please visit oakridgeboys.com.

To keep up with future releases, social media, and everything about The Oak Ridge Boys, visit HERE.