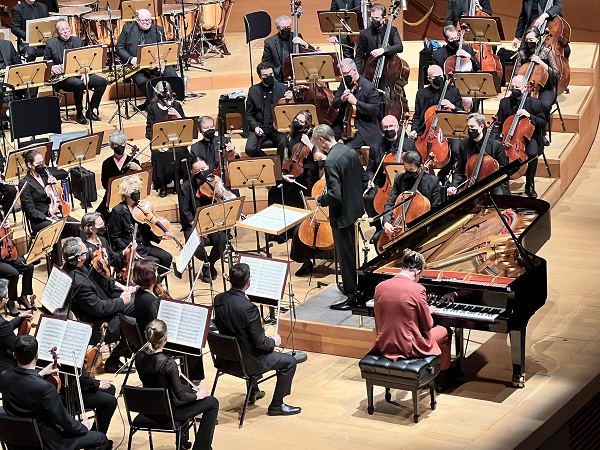 Symphonic Ellington: New World A-Comin’ with Gerald Clayton at the Walt Disney Concert Hall in downtown Los Angeles proves to be a lovely and dynamic revelation. Indeed, it was a revelation once the show began, but it was a bit problematic getting into the venue. Taking the vaccine entrance check to the next level, the venue demanded proof of vaccination and proof of a booster shot.

As a result, several people, including my friend, were denied entrance. Although I agree with the safety protocols, I also believe there should have been some leeway the first time around. The policy was just changed this past week, and many people, including this journalist, were not aware of the requirement.

Therefore, as my friend headed off to Little Tokyo for a sushi fest on his own, I went in and sat by myself in the balcony to watch the show. As always, the LA Philharmonic was nothing less than spectacular. As opposed to artistic director Gustavo Dudamel, the orchestra was conducted by Thomas Wilkins. As the Principal Conductor of the Hollywood Bowl Orchestra, Wilkins brings energy and commitment to the stage. What makes Thomas Wilkins special as a conductor is his ability to transition the orchestra so effortlessly from a triumphant crescendo to the soft expression of a single instrument’s beauty.

The highlight of the performance came before the intermission with the LA Philharmonic playing in concert with Gerald Clayton to explore Duke Ellington’s New World A-Comin’. The six-time Grammy-nominated pianist brought a combination of a subtle grace mixed with the late-night smoky vibes of classic Paris nightclubs. As a result, you had the full power of the LA philharmonic punctuated by the soft virtuosity of a single instrument.

As the piano explored the complexities of Ellington’s compositions, the LA Philharmonic waited in respectful repose. With Gerald Clayton’s piano front and center, it felt like a single instrument breaking free of the creative web of the rest of the orchestra. Indeed, the keys of the piano allow for punctuations and accents that the orchestra underscores and highlights. Imagine the dance of Gerald Clayton’s fingers taking place slightly above the smooth waves and rolling seas of Thomas Wilkins and the LA Philharmonic.

Overall, despite the exclusionary hiccups of the beginning, Symphonic Ellington: New World A-Comin’ with Gerald Clayton at the Walt Disney Concert Hall was a night to remember. Bringing back the best of jazz and classical music intertwined, the night reminded us of what happens when we come together and celebrate performance culture.