Los Angeles, CA (The Hollywood Times) 8/5/21 – Wednesday night at the Harmony Gold Preview House in Hollywood was a screening of Todd Stevens’ Swan Song (2021), a bittersweet dramatic comedy about a retired hairdresser (played by Udo Kier) in a nursing home near Sandusky Ohio, who is contacted to the hair and make-up for a recently deceased society lady that he knew. Written and directed by Todd Stevens, this is his third film centered on his hometown of Sandusky, Ohio – a small city of 26,000 people located on the shores of Lake Erie. This screening was a warm-up to Outfest 2021, which opens on Friday, August 13. Swan Song premiered at SXSW 2021 and recently was featured at FrameLine 2021 in San Francisco. It is not in the line-up for Outfest 2021, because its limited release date in theatres on Friday, August 6; it will be available VOD on August 13, 2021.

The story takes off when the hairdresser, Mr. Pat (played by Udo Kier) escapes his nursing home and embarks on an odyssey across his small town to style a dead woman’s hair for her funeral, confronting the ghosts of his past and rediscovering his sparkle along the way. As director Stevens explained at the Q&A, the film was based on a real person, Pat Pitsenbarger, who Stevens recalls seeing when he was growing up in Sandusky. This Pitsenbarger was a very flamboyant gay man, an icon in his community who did drag performances at a local gay nightclub. The real Pat had a lover by the name of David, who died of AIDS in the 1980s, and in the film, we see Udo Kier (as Pat) visiting the actual gravesite. As the film opens, Pat is now tethered to a life in hospice where there is little to do except sneak off to the end of the corridor to smoke cigarettes. It all changes when a lawyer named Shanrock (Tom Bloom) shows up with a proposition: One of Pat’s former clients, Ms. Rita Parker Sloan (Linda Evans), has passed, and made her dying wish in her will that Pat style her hair for an open-casket viewing.

Swan Song is built out of memories in the head of writer/director Todd Stevens, but it is Udo Kier who brings the character of Mr. Pat to life in what might otherwise be a rather uneventful story. Kier sinks comfortably into playing a wicked old queen with an arch tongue. At first, Pat declines Shanrock’s offering, saying, “Bury her with bad hair.” Pat has a change of heart and sneaks out of the retirement home and heads down the road to Sandusky. He hitchhikes a ride with a kind woman to whom he explains that he once had a lover, and that lover was a man, and that man died of AIDS. He is promptly dropped off at a church with a graveyard and visits David’s grave. What happens next is a comedic set of encounters where Pat tries to get the hair-dressing products he will need to do the hair for the dead woman at the funeral home. He steals some items (having no money) and in a second-hand store acquires a 1980s-style lime-green pants suit which Udo Kier says he loved wearing throughout the making of the film. 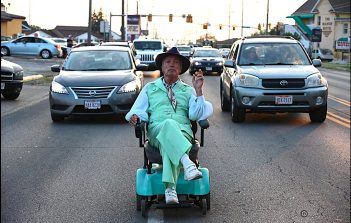 Next, he stops at the beauty salon of his former hairdressing assistant the tart-tongued Dee Dee Dale (Jennifer Coolidge) who many years ago stole his top clients to start her own salon. “You dropped the ball, and I was there to catch it,” Dee Dee says, about their acrimonious past. Pat then decides to stop by the house of the deceased Ms. Rita Parker Sloan, where he discovers a special kinship in Rita’s comfortably out-of-the-closet grandson Dustin (played by Michael Urie). Using money he found in the pocket of the lime-green pants suit, he stops at the local gay bar where he tries briefly to relive the magic of a place important to the gay community in the 1990s and where he once headlined in drag shows. But his life is full of dashed dreams, despite the lingering memories.  After a comedic mishap on the stage at the same gay nightclub, he winds up in the hospital but quickly escapes, commandeering an electric scooter for seniors and takes off in the middle of traffic to the tune of Shirley Bassey singing “This is My Life.” 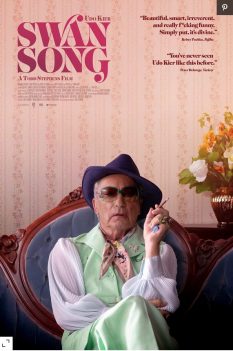 Not much really happens in the film, which seems like a homage to memories of the 1990s. We keep wondering if and when Pat the retired hairdresser will show up at the mortuary to fix the hair of the deceased Ms. Stevens. There is a considerable camp aspect to the film and at times undercuts the pathos we might otherwise feel. It is really Udo Kier’s show and his tremendous skill as an actor that make the character of Pat Pitsenbarger come alive. Kier has had a very long career as a character actor, often playing a Nazi or a vampire or a butler in a big production, most recently as a raging cuckold who gouges the eyes of his wife’s lover in the bleak and brutal Holocaust drama The Painted Bird and a German-American private military contractor using drones and AK-47s to take over a remote town in the Brazilian film Barucau. But here in Todd Stevens’ Swan Song, as a snarky, acerbic, long-retired hairdresser, he finally got to be the “leading man.”