Hollywood, CA (The Hollywood Times) 8/29/21 – On Sunday, August 29, at the Hudson Theatre Main Stage in Hollywood, I saw the provocative dark comedy Sugar & Sh*t, written and performed by Lori Hoeft and Lenny Langley. This is the last day of the month-long Hollywood Fringe Festival. Directed by Lori Hoeft with Dwight Kennedy, Sugar & Sh*t combines the memoirs of a sex worker named Sugar and the chronicles of an unwanted adoptee named The Sh*t (who ate frosted flakes every day and never forgave her mother for setting the house on fire). These two people, though seemingly from separate worlds, take the audience on a wild ride through meetings with a variety of deranged characters. 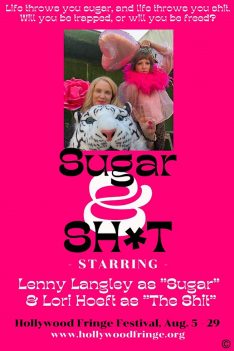 The production begins with a bang when the totally nude Lenny Langley shares her experiences as a sex worker named Sugar with an unsuspecting audience. In a reverse strip tease, Sugar slowly begins to adorn herself in peekaboo trappings which might make even Secret Victoria blush. From see-through lace to bouncy pink feathers, Sugar lets you know “In no uncertain terms” what her world is all about as she slowly unwinds her torso from her make-up vanity to a shadowy barred cage. She takes us on a wild ride through meetings with a variety of deranged characters including nuns, priests, sinners, firemen, tiger poachers, and classic clients at a strip club. Yet somehow this bare sex kitten doesn’t quite bare her soul to the spell-bound audience. Off-stage, Langley is a queer writer, dancer, model, and performer currently living in Los Angeles.

From the languid, shapely icon of raw sex, Sugar & Sh*t moves on to the second strikingly different tale about SH*T, a woman who was adopted as a child and felt unloved and unwanted ever since. Especially by a mother she never really understood. The S**t (who ate frosted flakes every day and never forgave her mother for setting the house on fire). Even as a high school cheerleader and prom queen, Lori Hoeft lacks the confidence to assert her own needs and, in fact, sees herself as “Sh*t.” Telling her own story, Lori Hoeft is a Clio Award-winning disabled writer, director, and producer based in Los Angeles.

Eventually, Sugar and S**t meet on their shared quest for sovereignty and achieve their freedom. It was not until Hoeft and Langley happened upon the Creativity Salon that they both realized that they too had important stories to tell. Featuring storytellers James Nave and Allegra Huston, the Creativity Salon is based in New Mexico. But Nave and Huston are brought live right into the Hudson Theatre after the performance through the miracle of modern technology. The two “cyber-visitors” offered a quick writer’s workshop for interested audience members, in which I participated after the end of the play. There were about 30 people in the theatre audience and another 40 viewing the performance online.