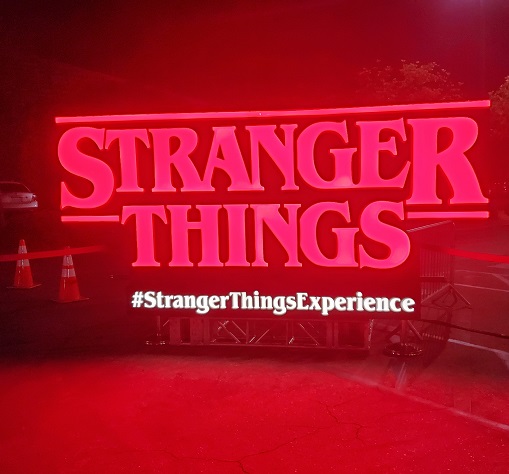 Montebello, California (The Hollywood Times) 11/18/2022 – The sun was starting to set and the sky took on a strange appearance as I was aboard the Metrolink train. Check out the photo for yourself. Sort of creepy since I was going to check out the Stranger Things: The Experience later that night. 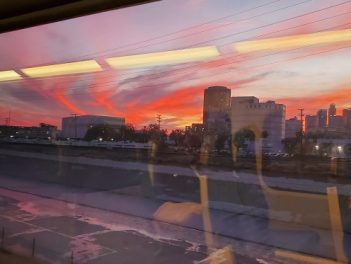 The Hollywood Times was invited to a VIP media event in Montebello to experience the Stranger Things: The Experience for ourselves. I invited my son Billy and my daughter-in-law Raquel to come along since they are huge fans as well.  For me, I had to talk myself into going through the experience since I do suffer from anxiety and panic attacks and after talking to one of the staff members and the awesome PR person Pauline, who invited us, I told myself, You Can Do This and I am SO glad that I did, because it was really awesome.

This is what my daughter-in-law had to say about it:  Stranger Things: The Experience, was to say the least, quite the experience. From the awesome showcasing of the lit-up sign Stranger Things at the entrance and the amazing mural of the cast and characters created on the building, had us looking forward to what was to be experienced inside. This event was well thought out and constructed to give fans the ultimate experience into the Stranger Thing” reality from start to finish. With the opportunity to dress in your best 80s style to fit the theme and even being taken back with arcades, photo booths, entertainment and merchandise, who wouldn’t love taking it back to the 80’s? The entire event was ‘a vibe’ you don’t want to miss out on. We had a blast!”

I totally agree with all that she said!

From the moment you walk through the doors, after being greeted by the many cast members, they direct you into the first part of your Stranger Things: The Experience.  You enter into an area, known as the Sleep Study Area.  They had some red, yellow and blue signage with Group A and B. Boy I sure can use help with my sleep!

One of the lab techs in a white coat came around and started to talk with Billy by asking him several questions and they had a conversation. We were put into groups: A and B, we were also given red, yellow or blue wrist bands, not knowing what that was all about.  There are no photos allowed once you go into the experience from that point. Next we all saw a familiar face on the screen, none other than Dr. Sam Owens himself telling us that we were not allowed to take any photos since the flash will disrupt the studies. The sleep study room was really cool and I won’t tell you want happens in that room, so you must go to experience it for yourself.  I so want to tell you more but…you will thank me for not telling you want to expect, just know you will love it, especially those of us who are true fans.

Awesome panic room experience and real life stuff, the room you enter for the upside down part is indeed Out Of This World, worth the price of admission, WOW, Netflix, Fever and all those involved you made this Experience epic! I’m glad I am a Stranger Things fan and we all have the opportunity to experience this, you feel like you are part of the series with cast members we all fell in love with.  Here is a photo from Netflix, but I cropped it somewhat as not to give it away. It involves 3D glasses. You will most likely find it out there somewhere, but not here at The Hollywood Times, we can keep a secret!

After the Experience, which takes about 45 minutes, you will go through another door leading to the bright world of the 80s called Mixed-Tape.  It is really cool with bright neon signs and cast members dressed in 80 fashion and also costumes for where they work. They offer bottle water, Cocktails and Mocktails, which I had one called Eleven and it was delicious and sparkling too at The Upside Bar.  You can hang out here until the experience closes, for us that night it was at 10:30 pm. 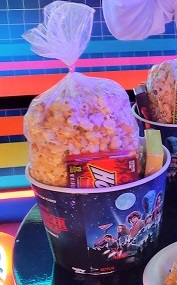 They had Stranger Things: The Experience popcorn tubs that you could put a bag of popcorn in as well and boxed candys like at the movie theaters and I took Hot Tamales, Lemonheads and Red Vines! There were staff members passing out chicken and waffles. They had pizza and corn dogs over at the Surfer Boy Pizza truck.  There was even a Scoops Ahoy with pretzels and many flavors of ice cream.  The best part for me was the Palace Arcade the upright arcades like Centipede and I was high scorer!

Enjoy the photos of The Mixed-Tape area:

Don’t miss the opportunity to go be part of Stranger Things: The Experience.

On the way out a couple of cast members asked us how we enjoyed the experience and all thumbs up and I said it was FAROUT.  There was three different shirts, blue, red and yellow, which represented the team color bands we were given.  Once we picked the one we wanted and size, they handed us a cool swag bag with the Stranger Things: The Experience logo on it. The Dustin Bluetooth speaker was totally cool and plastic tumbler with red lid, which is great for keeping a full glass of water on your nightstand for bedtime consumption. Yet another fun thing for VIP media night.

Then its through the last door to take you outside where they had movie star trailer type bathrooms, really nice indeed and we needed to use before our drive back home to Rancho Cucamonga.  Then there are three vehicles from the series: Billy’s Blue Camaro, Hopper’s Police car and the Russian Lynx Security Van.

Last but not least was this awesome mural for Stranger Things: The Experience.

Co-produced by Netflix and Fever, this groundbreaking experience takes fans of the global hit series inside some of its most iconic settings on an intimate guided new adventure alongside their favorite characters before the chance to hang out and explore all the major locations from the show.

Netflix and Fever are giving Angelenos a groundbreaking, in-person live multimedia experience with the all new Stranger Things: The Experience.

The venue, located at 1345 N Montebello Blvd, will be transformed into iconic sets and challenges from Stranger Things.

Tickets are limited and prices will start at $49 per person and can be booked at strangerthings-experience.com/los-angeles.

The experience opened in New York in May, San Francisco in June, London in August and Atlanta in October, with other cities announced around the world later this year.