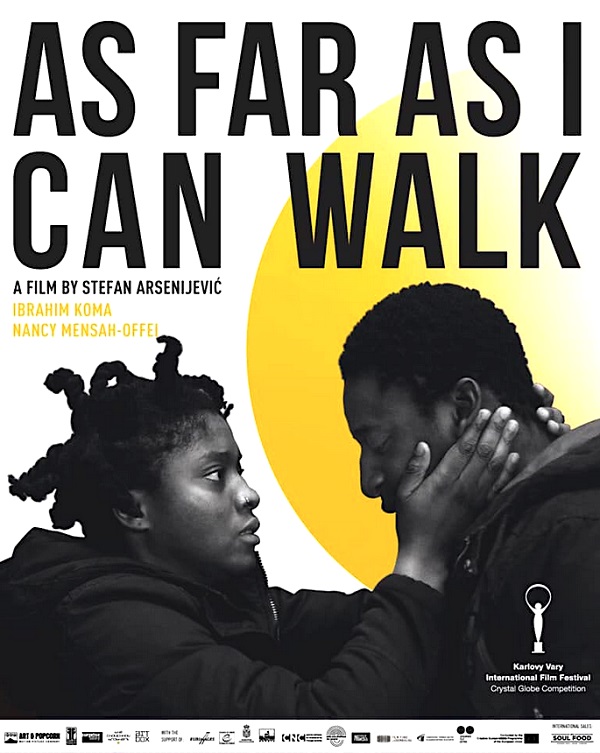 This year’s SEEfest, the 17th year of this offering of new films from South East Europe, featured a timely film from Serbia, “As Far As I Can Walk” (2021)

Winner of a number of awards at international film festivals, Stefan Arsenijevic’s As Far As I Can Walk is a modern migrant love story involving two young Africans from Ghana in a refreshing take on this genre of story-telling. Arsenijevic re-imagines a traditional medieval Serbian epic poem where the contemporary African migrants take the place of Serbian national heroes. This convincing drama raises questions about identity, tradition, race and love. This being the closing night of SEEfest, director Vera Mijojlić announced the winners of awards determined by the festival jury. As Far As I Can Walk was cited for its significance as a statement about the immigrant crisis in Europe by Cinema Without Borders. The film is a co-production of Serbia, Luxembourg, France, Bulgaria, and Lithuania.

Ghanian couple Samita ‘Stralinya’ (French actor Ibrahim Koma) and his actress wife Ababuo (Nancy Mensah-Offei), both in their late twenties, have been deported from Germany to a transit camp in Serbia where their new existence exposes fault lines in their relationship. Stralinya, named after the epic hero, is a talented footballer who deserves to get a contract as a professional with the local team. Samita is a migrant from Ghana, one of thousands who ended up in Belgrade refugee camps after attempting to cross into the EU. As the film opens, we see Strahinja and his wife of three years, aspiring actress Ababuo in a tender and passionate embrace on the lower bunk bed in the camp dormitory. Having submitted their asylum papers to the Serbian authorities after being deported back from Germany, the pair has apparently settled in Belgrade. Strahinja believes life in Serbia is not such a bad option, has learned the language and hopes to get selected for a local football team.

This actually works out, but after a night of celebrations, Strahinja returns to find his wife missing. He learns she has suddenly left with two Syrians for Hungary. Not hesitating for a moment, he packs up and goes to Aca (Slaviša Čurović), the “chief” of a group of taxi drivers who smuggle refugees into Hungary. He has already been bringing “customers” to Aca, and the man insists that room is made for his protégé in a car overloaded with a Syrian family of five persons. Nothing will stop Strahinja/Samita from finding his wife, not even the fact that he will lose his right to asylum as he has left the country.

Forcing his way into a vehicle loaded with people being smuggled across the border, Samita (who goes by the Serbian name of Stahinja) learns that the driver charged with transporting his fellow refugees is delivering them straight to the police. Stralinya is furious, mostly at himself, because he feels a moral responsibility having led most of his friends to their ultimate fate.

Evading the border police, Stralinya crosses into Hungary, where Ababuo has taken up refuge with a Syrian charismatic left-wing activist, Ali (Maxim Khali) in just another transit camp. Stralinya confronts his wife, who claims she needs “at least the illusion of something big.” After a massive argument the two approach the head of the transit camp in a bid to be re-deported. But while Stralinya is sitting in the bus, waiting to leave, he sees Ababuo being dragged by soldiers towards the bus. He must make a decision about the fate of Ababuo.

The medieval Serbian epic poem Banovich Strahinya has also been previously adapted into a film by Vatroslav Mimica, made as a Yugoslav-German co-production in 1981, with Franco Nero in the main role. Its international title was The Falcon and the film premiered at the 38th Venice Film Festival. Stefan Arsenijevic has transformed a highly stylized tale of an epic hero into real, flesh-and-blood characters in Strahinja and Ababuo, with well-defined personalities, pasts and hopes for the future. The lead actors carry the film and we come to understand that these refugees are broken and poor, but dignified and resourceful.

The story takes place in autumn and in winter. Although the migrant camp is supposedly near Belgrade, we really don’t see much of the city. The first half of the film takes place in a refugee camp which seems fairly clean and responsibly managed.

Later we see temporary migrant camps in the countryside in tents with make-shift arrangements for people sleeping on the ground. When Strahinja gets on the road and is forced to trudge on foot through the Hungarian countryside, sleeping in a deserted mansion in the middle of nowhere, the camera follows him from the back, implying the lengths the man is determined to go to in trying to find his wife.

Serbian director Stefan Arsenijević, who broke out internationally in 2003 by winning the Golden Bear for his short (A)Torsion, which he followed up with the 2008 Berlinale Panorama title  Love and Other Crimes. Actor Ibrahim Koma was last seen in Daouda Coulibaly’s Wùlu, a 2016 Malian crime drama film directed by Marseille-born French-Malian director Daouda Coulibaly and co-produced by Éric Névé and Oumar Sy.