Los Angeles, CA (The Hollywood Times) 6/14/21 – Starz just released Blindspotting, an adaptation of the 2018 film. Set in Oakland, California, the series focuses on Ashley (portrayed by Jasmine Cephas Jones) as she tries to negotiate life with her son, Sean (Atticus Woodward ), boyfriend’s mother, Rainy (Helen Hunt), boyfriend’s sister, Trish (Jayln Baron), and other family members because her boyfriend, Miles, (Rafael Casal) was incarcerated. Daveed Diggs, who co-starred in the 2018 film as Collins, is now serving as a co-producer. As a departure from its movie counterpart, Blindspotting centers on Ashley’s life as opposed to centering on Collins’ life. In the movie, Ashley’s character made several appearances but the television series centers on Ashley’s life. The television series follows its movie counterpart in breaking into rap, spoken word, and breaking the fourth wall.

At a time where the nation is concerned about human rights, the series offers a take on questions around sexuality, feminism, class, and, indeed race. A substory within Blindspotting, for example, revolves around the tension between Trish and Ashley. In this subplot, the writers focus on a subplot that highlights how Trish navigates stigma because of her career as a sex worker. Additionally, while Blindspotting also centers Oakland in the midst of gentrification, it also navigates Ashley’s marginalization of working at a hotel with a song and dance number, but, also, she also smashes objects in a hotel room with a tennis racket.

Ultimately, Casal and Diggs see Blindspotting as a way to explore the “human experience” and to examine social issues in a format that welcomes audiences.

Here is the trailer: 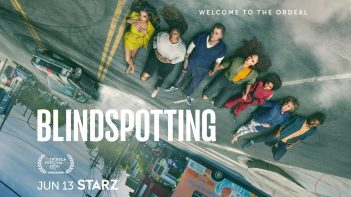