The Poets of Amityville, an ensemble comedy, centers on an adult education poetry class in Long Island, where a possible trip to Dublin ignites a fierce competition. 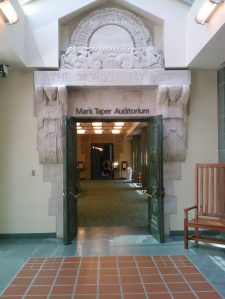 Admission is free, but reservations are required.

The Poets of Amityville is presented by L.A. Made.

LA Made aims to educate and inspire individuals in the areas of literature, arts, and music, as well as in other areas of knowledge with a humanities context. Focus is on the diverse landscape of Los Angeles, highlighting the immense artistic and performance talent that has developed over the course of the City’s eclectic history.

As all “LA Made” programs at Central Library are free of charge, it is our policy to overbook. In the case of a FULL program, your free reservation may not guarantee admission. We recommend arriving early. Space permitting, unclaimed reservations will be released to standby patrons at approximately 1:45 p.m.

There is no advance waitlist for full programs. Standby patrons will be admitted subject to availability on a first-come, first-served, basis.