‘Great Performances’ musical special, The Bernstein Centennial Celebration at Tanglewood –beautiful embeddable clip of a performance of “A Boy Like That/I Have A Love” (West Side Story) featuring Isabel Leonard and Jessica Vosk:

“A Boy Like That/I Have A Love” – West Side Story

It’s going to be a very musical holiday season on PBS with the premiere of the star-powered Great Performances: The Bernstein Centennial Celebration at Tanglewood on Friday, December 28 at 9pm. 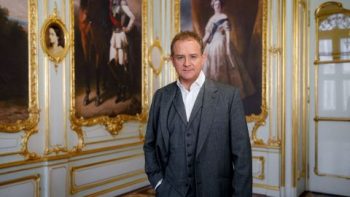 Followed by Great Performances – From Vienna: The New Year’s Celebration 2019 ringing in the new year on Tuesday, January 1 at 9pm with Hugh Bonneville as host (check local listings).

With From Vienna: The New Year’s Celebration 2019, Great Performances its cherished tradition of welcoming the new year with the Vienna Philharmonic at the opulent Musikverein, under the baton of guest conductor Christian Thielemann, featuring favorite Strauss Family waltzes and the dancing of the Vienna State Ballet. Downton Abbey’s Earl of Grantham Hugh Bonneville will return as host.

In honor of Leonard Bernstein’s 100th birthday, Tanglewood—the famed summer home of the Boston Symphony Orchestra— dedicated its entire 2018 season to the iconic composer, conductor, performer, educator and humanitarian. The festivities culminated on Bernstein’s centennial birthday on August 25, 2018, in a special celebrity-studded gala concert, with every memorable moment captured for a worldwide audience by THIRTEEN’s Great Performances series. Great Performances: The Bernstein Centennial Celebration at Tanglewood features some of the world’s leading performers and musicians from the classical stage, opera and musical theater in a tribute to the music legend. The program premieres nationwide Friday, December 28 at 9 p.m. on PBS (check local listings) and will be available to stream the following day via pbs.org/gperf and PBS apps.

Directed for the stage by James Darrah, Great Performances: The Bernstein Centennial Celebration at Tanglewood illuminates the breadth of Bernstein’s incredible life and career, which inspired generations of music lovers around the globe – from his talent as a composer to his generosity in mentoring other composers and musicians, his inimitable role as a driving musical force at Tanglewood for over 50 years and more.

About Leonard Bernstein And the BSO and Tanglewood

Leonard Bernstein’s fifty year association with the Boston Symphony Orchestra and Tanglewood began in the summer of 1940, when he became a member of Serge Koussevitzky’s first conducting class at the new Berkshire Music Center, in part thanks to a written recommendation from Aaron Copland. In a letter to Koussevitzky—who became a mentor and great friend of Bernstein’s over the next ten years—Bernstein described that summer as “the happiest and most productive of my life.” He would go on to become Koussevitzky’s assistant at Tanglewood beginning in 1942, and would return virtually every summer of his life thereafter to work with both the Boston Symphony and Tanglewood Music Center orchestras. Bernstein’s time as a student at Tanglewood played an integral role preparing him for his first big break in 1943, when, at age 25, he stepped in for Bruno Walter in a nationally broadcast concert with the New York Philharmonic. He made his BSO debut the following winter in February 1944, leading his own Symphony No. 1, Jeremiah, and Copland’s El México. Following many decades of major accomplishments and an undeniable impact in the music world, in 1988, Leonard Bernstein turned 70 and Tanglewood threw a four-hour concert/birthday party, Bernstein at 70!, that was aired on PBS’s Great Performances, was hosted by Beverly Sills, and featured a star-studded line-up. Bernstein made his final Tanglewood appearances just two years later, on August 29, 1990, leading the BSO in a dramatic performance of Beethoven’s Seventh Symphony as well as the “Four Sea Interludes” from Peter Grimes for what would become his final appearance before his death on October 14, 1990. 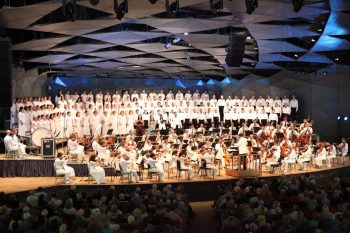 At Tanglewood and with the BSO, Bernstein lead some of the most important performances in 20th century musical history, including the first American performance of Benjamin Britten’s opera Peter Grimes (commissioned by Koussevitzky), and the world premiere performance of Olivier Messiaen’s Turangalîla Symphony (commissioned by the BSO). In 1951, after Koussevitzky’s death, Bernstein headed up the orchestral and conducting programs at Tanglewood, where he remained active as a conductor and teacher for the next 40 years; he wore a pair of Koussevitzky’s cufflinks at every concert he conducted, and ritually kissed them before entering the stage for each performance. Bernstein composed two works for the Boston Symphony Orchestra: his Symphony No. 3, Kaddish, commissioned for the orchestra’s 75th anniversary and given its American premiere by the BSO in 1964; and his Divertimento, a BSO centennial commissioned that was premiered in September 1980. The BSO also gave the world premiere performance of Bernstein’s Symphony No. 2, Age of Anxiety (dedicated to Koussevitzky), with the composer as piano soloist; the first concert performance of his suite from his only film score, On the Waterfront; and the American premieres of his Serenade (after Plato’s Symposium) and Halil. For a more in depth history of Leonard Bernstein’s relationship with the BSO and Tanglewood, click here.