Palm Springs, CA (The Hollywood Times) 4/10/22 – DAP Health did it again. They brought the Steve Chase Awards (The Chase) back, post-pandemic, in a big way. Lit trees, step and repeat, celebrities, and a gorgeous dinner (with vegan options, naturally) all awaited guests at the highly anticipated gala. 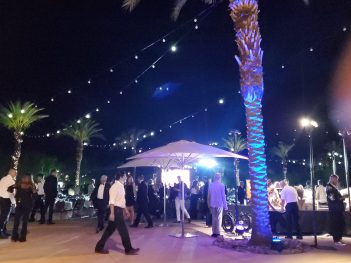 The theme was reminiscent of Amalfi Coast atmosphere and was held at the legendary Palm Springs Convention Center, per tradition; but with a twist.

Perhaps most notably was a blue carpet–the color of healthcare, rather than a red one. And moving outdoors was a noteworthy and compassionate change, given recent events. As for the out of the ordinary boxed dinners, we were told, the money saved from not serving a traditional dinner went back into DAP’s health services.

Diageo donated the alcoholic drinks for the evening, as well.

“I think The Chase has, since its beginning, really been an opportunity for the community to come together,” director of marketing for DAP Health Steven Henke told us earlier this week. “It’s one of those events that just marks the calendar, and it has been now for 28 years. I think when it fell off the calendar during the pandemic, it left a big gap because it’s like a holiday.”

Like a holiday, indeed. The Chase Awards are renowned for bringing the top in entertainment and fine dining, and drawing celebrities. It could even be considered well above a traditional holiday in terms of pageantry, fashion, and sheer community connection.

There were lovely musical breaks, presenters and speakers from DAP Health, and of course the occasional unexpected (surprise) guests.

Another change from previous years included fewer awards–two, versus the previous four. DAP Health volunteers were among the honorees, as was Rep. Raul Ruiz, who received the first ever DAP Health Equity Award.

One thing that remained firmly the same was the sense of community DAP always brings with The Chase. “We actually polled our donors and past attendees of what they would like for The Chase 2022, and it was overwhelming that everybody said get back together,” even co-chair Kevin Bass.

And overwhelmingly, from somebody who enjoyed the event immensely, your guests loved it. Total proceeds for the evening exceeded $1.4 million.

To learn more about The Chase and their 28th annual awards, click https://www.daphealth.org/thechase/