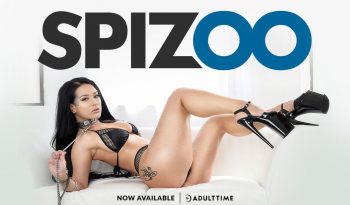 “We are excited to be a part of the Adult Time experience,” said a Spizoo representative. “Spizoo Network pushes hard to create the highest quality content for our users, and we will continue to produce even more for the members of this revolutionary product!”

Full scenes are available at Spizoo.com as well as within the dedicated Spizoo channel on the Adult Time platform. Visit Adulttime.com to access more than 60,000 scenes from the network’s award-winning brands.

“I’m very excited to stretch my legs and try something new,” Hart says. “Shooting for DVD requires a different skill set than the clip style I’m used to. My fans seem to really want DVDs, so here we go!”

“I had the pleasure of meeting Lance a few years ago in Vegas, and have followed his career since then,” says Joy Media Group VP of Sales David Peskin. “I’ve watched him explode on the internet, and in my mind he’s the biggest male star worldwide. His high-quality niche content is perfect for our customer base. I’ve already reached out to some of our key buyers to show the first two covers, and they shared in my excitement. I’m honored to represent Lance Hart Studios to the DVD, VOD, broadcast, and licensing markets!”

LOS ANGELES—Organizers of the Urban X Awards announce that pre-nominations are now open for the 2019 awards show, scheduled to take place August 18 at the Globe Theater in downtown Los Angeles.

Fans and industry members alike are invited to submit pre-nominations for their favorite performers, movies and products until the submission period closes June 3. Pre-nominations may be submitted here.

“We are very excited about our inductees to the Urban X Awards Hall of Fame this year,” Urban X founder Giana Taylor said. “These legendary veterans of our industry are all very deserving and they are examples of our motto of diversity, creativity and unity. I hope everybody will come join us at the awards in August.”