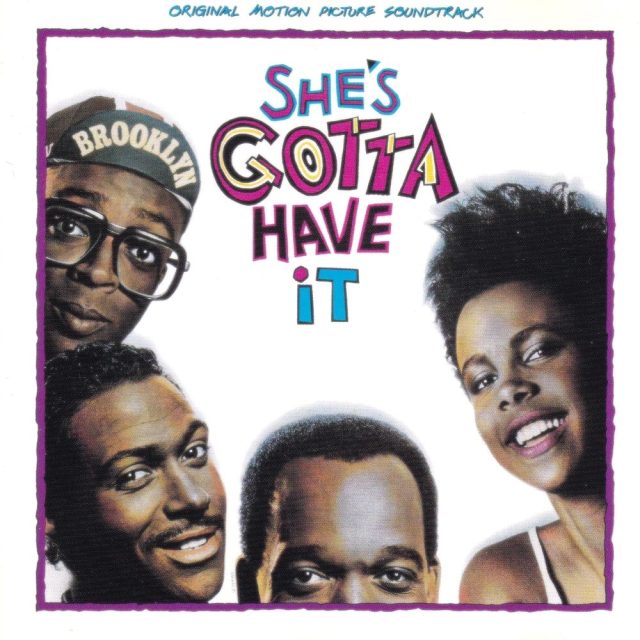 Los Angeles, CA (The Hollywood Times) 5/10/22 – Opening a retrospective of films by Spike Lee at the Motion Picture Academy Museum on Saturday, May 7, was Spike Lee’s She’s Gotta Have It, a breakout feature first released in 1986. Even today, the film remains as daring and significant as it was 1986, which is perhaps why Spike resurrected the characters in the film to create his television series for Netflix by the same name in 2017. An intellectual treatment of sexuality, identity, responsibility and race, Spike Lee’s mostly black and white homage to his filmmaking heroes is as entertaining as it is thoughtful. Suggestively titled so as to trick people into thinking it might be porn, shot in 12 days for less than $200,000 (much of that cash put up by black cultural critic Nelson George), and yet grossing more than $7 million, She’s Gotta Have It is a classic of successful guerilla filmmaking.

A fairly straightforward story about a young, beautiful, and sexually frank woman named Nola Darling (Tracy Camilla Johns) and her three suitors (Spike Lee, Tommy Redmond Hicks and John Canada Terrell), She’s Gotta Have It is an archetypal “art film.” Indeed, the main joy in revisiting this film is to observe a very young filmmaker’s combination of fresh, innovative techniques and blatant borrowing from his forebears. In terms of the camerawork and editing, Bergman, Fellini, Truffaut, Antonioni, and film noir master Howard Hawks are all influences worn on Lee’s style. But most significantly, as a pseudo-documentary (characters are introduced with titles, speak into the camera as though being interviewed) supported by armchair psychology, a jazz soundtrack, and a healthy concern with sex and relationship anxiety, She’s Gotta Have It plays like a Woody Allen film across the bridge in Manhattan.

As Nola attempts to balance her three lovers – they all know of, and detest sharing her with, the others – we begin to see the (perhaps too obvious) ways each represents a facet of the “ideal” or complete man. There is Lee’s character (instructively named Mars Blackmon), the motor-mouthed, gold-chained, selfish, but ultimately fun, guy; there’s Greer Childs (John Canada Terell), a man so arrogant, so obsessed with propriety, money and success that he repeatedly reminds Nola that he only dates “fine” women; and there’s Jamie Overstreet (Tommy Redmond Hicks), the sensitive, safe, and kind man who might just be the one, if he weren’t so damn boring. A post-Freudian play on the id/ego/superego concept (roughly transposed to gratification/self-worth/conscience), each of her suitors adds up to the one, complete man – or, as Greer puts it late in the film, a “three-headed monster.”

The movie bounces around between Nola’s affairs with each man, in and out of bed, as they struggle to come to terms with just which one of them really has Nola. Throughout, the concept of ownership – sexual, physical, mental, personal – gets deliberate treatment. During the climactic scene, one of them demands to know: “Whose pussy is this?” As we circle ever closer to the answer, the question (however horrifically posed) seems more and more appropriate. It’s hers, of course, or nobody’s. As she comes to understand this, through abortive psychoanalysis, painful self-reflection, and an awkward lesbian encounter, Nola comes ever closer to self-actualization. Opal Gilstrap (Raye Dowell), a lesbian friend of Nola’s who believes every person is capable of sexual fluidity, expresses attraction to her and when Nola asks how having sex with a woman is, offers her an opportunity to find out. However, Nola declines. A woman (or, at least Nola) can be a sexual being, doesn’t have to belong to a man, and perhaps shouldn’t even wish for such a thing.

In the post-blaxploitation 1980s, the silence of black filmmakers was amplified by the persistent on-camera representation of urban black America as drug-crazed, violent, and shallow. Lee’s approach to She’s Gotta Have It, thoroughly elaborated in his 1987 book on the subject (Spike Lee’s Gotta Have It), was to represent the kinds of people he actually knew, not hollow stereotypes and expected role-players. And so, his simple gambit was to present a film about a black New York comprised of educated, sophisticated urbanites.

Indeed, Spike Lee’s Brooklynites share much more in common with Woody Allen’s New Yorkers than, say, Martin Scorsese’s. No less necessary today amid the calamity of racial backstepping which underwrites such so-called “black” movies as Norbitt and Big Momma’s House, wherein the celebration of ignorance acts as a stand-in for culture and community, She’s Gotta Have It revitalized the idea of a black filmmaking that didn’t emphasize a despairing blackness as the dominant trope. Lee’s characters are black, yes, and so much more.

Although casual references to Malcolm X and to black appropriations of “whiteness” pepper the script – when Nola dumps Greer he responds by declaring that he is going to go “get a white woman” – unlike in Lee’s later and more aggressively polemical films they are just subtle enough to remain suggestive. In what is surely the key scene, Nola bakes a Thanksgiving turkey for her three men, and they sit together awkwardly for supper. The streetwise Mars (id) wants dark meat; the fastidious and upwardly mobile Greer (ego) wants white; and the centered, calm, and caring Hicks (superego) doesn’t seem much to care. Race, Freud, performativity, and a foundational American holiday: Spike Lee has carved the American turkey of independent cinema brilliantly.

Shelton Jackson “Spike” Lee  brings his signature approach to every “Spike Lee Joint.” Not only a director but a writer, producer, and actor, he exercises a high level of creative control over his projects. Lee’s extensive and provocative filmography reveals an unwavering devotion to examining race relations in the United States from a Black perspective. Lee seeks to jostle his viewers out of complacency and often employs techniques to break the fourth wall, such as having his characters tell the audience to “wake up!” His formal filmmaking techniques have been carefully honed from a lifetime spent both making and studying film, reflecting the inspiration he draws from other movie makers working across a range of eras, genres, and global cinemas.

Spike Lee’s She’s Gotta Have It announced him as a filmmaking force to be reckoned with upon its release in 1986 and earned Lee a special Award of the Youth at the Cannes Film Festival. Tracy Camilla Johns plays Nola Darling, an independent young woman struggling to balance the men in her life, among them Lee himself playing the droll Mars Blackmon. Boasting vivid black-and-white cinematography by Ernest Dickerson and a jazz score by the filmmaker’s father, Bill Lee, She’s Gotta Have It is a signature piece of American independent cinema.

Coming up on Friday, May 13, 3:00 PM at the Academy Museum will be a screening of Spike Lee’s 4 Little Girls (1997). Spike Lee was a first-year student at New York University when he originally had the idea to make a film about the 1963 Ku Klux Klan bombing of a Birmingham church that killed Addie Mae Collins, Carol Denise McNair, Cynthia Wesley, and Carole Robertson. But it wasn’t until he was an established filmmaker that he felt he was ready to tackle this powerful story. Lee received an Oscar nomination for Documentary Feature for the film, which features archival footage as well as interviews with friends and family of the girls, remembering them as more than tragic victims.

Also on Friday, May 13, at 7:30 PM, the Academy Museum will screen Spike Lee’s Do The Right Thing (1989). Propelled by Public Enemy’s immortal “Fight the Power,” Spike Lee’s searing panorama of a summer day-in-the-life of a Brooklyn neighborhood remains one of his most enduring films, and garnered the filmmaker his first Academy Award nomination for the film’s Original Screenplay. As the temperature rises and tensions build along racial fault lines, a Bed-Stuy neighborhood, graced with striking murals commissioned by production designer Wynn Thomas, starts coming apart at the seams. More than three decades later, the film is as relevant as ever. Boasting an ensemble cast including acting legends Ossie Davis and Ruby Dee, Samuel L. Jackson, John Turturro, Giancarlo Esposito, Martin Lawrence, Bill Nunn, Supporting Actor Oscar nominee Danny Aiello, Rosie Perez in her film debut, and Lee himself, Do the Right Thing remains a landmark of American cinema.

In the following week, the Academy Museum will continue the Spike Lee retrospective with He Got Game (1998) on May 21, 7:30 PM.  Spike Lee and Denzel Washington reunited for the first time since 1992’s Malcolm X for this searing family drama. Washington plays an ex-con who pins his hopes on his estranged son, a high school basketball star (real-life NBA pro Ray Allen). Lee’s unusually eclectic music choices for the film feature both new songs by Public Enemy and the classic orchestral Americana of Aaron Copland.

Spike Lee’s satirical comedy Bamboozled (2000) will screen at the Academy Museum on Friday, May 27, 3:00 pm. One of his most daring films, Bamboozled is about a dissatisfied, Harvard-educated TV executive (Damon Wayans) who tries to get fired by programming an old-fashioned minstrel show, only to find that his creation is an unexpected and unwanted smash. The supporting cast includes legendary dancer-choreographer Savion Glover in a rare film appearance. With Damon Wayans, Savion Glover, Jada Pinkett-Smith, Tommy Davidson.