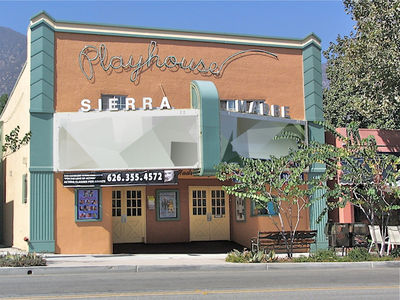 Can you believe it is almost time for Valentine’s Day?  Well, it is just around the corner and here is a great pre-Valentine’s Day concert to take that special loved one in your life.

The Hollywood Times has covered several plays and intimate concerts at the Sierra Madre Playhouse, and they all have been great.  The last event was with NBC weatherman Fritz Coleman, and that one was really a great one-man comedy show.

This one night concert will sell out fast, so call the Sierra Madre Playhouse today to get your tickets for this one of kind concert with classic jazz, Gypsy jazz, blues and Americana music.

Contact (626) 355-4318 for reservations or to purchase tickets online, visit www.sierramadreplayhouse.org

Sierra Madre Playhouse, 87 W. Sierra Madre Blvd., Sierra Madre, CA 91024. This is just east of Pasadena. There is ample free parking in a lot behind the Playhouse.  You could ride the Gold Line – click below to see the schedule and times:

You can catch a cab or Uber from the gold line Madre station to the playhouse.  There are several options to get you there if you don’t want to drive.  It is actually a nice drive right off the 210 fwy and easy to find.

There are many restaurants on Sierra Madre Blvd, so look those up and make reservations to have dinner before the concert.

Click below to find other restaurants in Sierra Madre https://www.google.com/?gws_rd=ssl#q=dinner+restaurants+in+Sierra+Madre%2C+CA

Born on the roof of an artist loft in Downtown Los Angeles, The Vignes Rooftop Revival serves up an exciting mix of classic jazz, Gypsy jazz, blues, and Americana. Their music incorporates a lively and diverse set of influences, from the classic French swing of Django Reinhardt to the vocal standards of Ella Fitzgerald and the Brazilian samba music of Dorival Caymmi. They are one of the area’s busiest and most “local” bands — they perform 3-8 shows a week within the LA area. They are excited to perform a special Valentine’s Day inspired set of music on February 12th, featuring the smooth jazzy vocals of Amber Navran and the sweet sounds of flute, trumpet, clarinet, guitar, and bass as performed by Patrick Torrez, Bergen Moore, Erik Miron, Rumi, and Capital!

If you like what you hear, you can find them performing weekly downtown residencies at Eat.Drink.Americano (Mondays), Cafe Gratitude (Tuesdays), and GROW (Wednesdays), and monthly residencies at 3 Clubs and Casey’s Irish Pub, The Vignes Rooftop Revival performs frequently at private parties and venues such as LA Live, Villains Tavern, OSSO DTLA, 1642, Angel City Brewery, SIP Speakeasy, The Paradise Bar, The Spring Street Arcade, and The Escondite.

The Sierra Madre Playhouse History | Evolution of a Theatre

The Sierra Madre Playhouse has evolved from a theatrical heritage that stretches back to the days when Sierra Madre was just a tiny village. Residents presented dramas and musicals as early as the 1880s in their homes, in the Town Hall, and in the Woman’s Club.

Then in 1923, the structure presently housing the Sierra Madre Playhouse was built. During the ensuing years, it has served as the focal point of the city’s family entertainment center, whether as a movie house, an arcade, or most recently, a theatre.

Its names have changed, as well as its functions. It was the “Wistaria Theater” when it first opened, but by 1929 it became the “Sierra Madre Theatre.”

When Charles Andrese and Cheryl Pertile founded a new Arcadia theatrical operation in 1980, it was initially called the “Playback Players” to reflect their intention to specialize in some of the older, classic plays. When they moved to the present location later that year, their premiere Sierra Madre production was “Moby Dick-Rehearsed,” written by the famed late Orson Welles. Since this was hardly an “old classic,” the group renamed itself the “Sierra Madre Playhouse.” Soon, Stan Zalas came to the Playhouse as artistic director. He and Andrese, who became general manager, built a solid reputation for providing quality entertainment and culturally sound family theater fare. Stan passed away in 1977 and Charles in 2009.

As with most community theaters, the Sierra Madre Playhouse has often been in tight financial straits. To support the theater, a small group of dedicated local citizens spearheaded a campaign in 1995 to assist the Playhouse, with George Enyedi and Lee and Barbara Cline playing lead roles. The Playhouse reorganized and became a non-profit corporation. A Board of Directors was formed in 1996 comprising nine dedicated community volunteers and theater lovers.

Each season-which runs from January through the following December, The Playhouse presents six to eight events, featuring well-written comedies, musicals, and intriguing mysteries. More serious dramas are interspersed occasionally. All are family oriented, and they showcase a repertoire remarkably varied for a community theater.