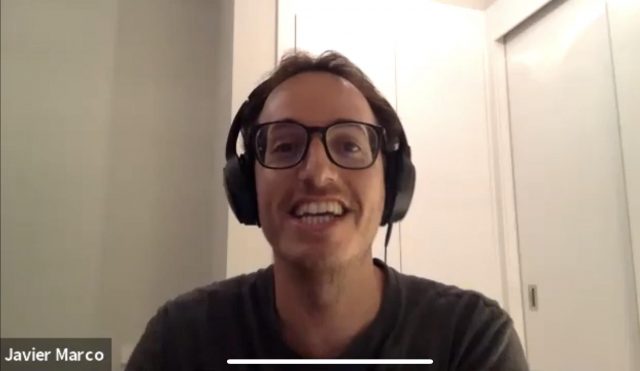 Los Angeles, CA (The Hollywood Times) 10/14/21 -Winning 55 awards and submitted to over 90 film festivals, “A La Cara” is a short film that packs a punch, deals with current dynamics around social media and features the talent of up and coming filmmaker Javier Marco. In less than 15 minutes, the Spanish film which translates to English as “Face to Face”, centers around a powerful scene and dialogue between Lina, a Spanish newscaster, who had been trolled on Twitter and her tormentor in real life, who she confronts. She was able to do this when he sloppily put up an advertisement online and it allows her to show up at his very normal looking apartment.

The scene captures all the awkwardness that would come from breaking the Internet to real life barrier, but also displays the humanity of both the victim and perpetrator. The newscaster herself had to deal with the grievance of the loss of her daughter, and she expresses the pain of his cutting words.  Meanwhile, a great performance by the troll showed the genuine remorse as he finally sees the newscaster face to face and is confronted with the reality. He apologizes profusely.

Many dynamics are explored from the burdens of celebrity and being a public figure to the anonymity of “man on the street”. But it also captured the dynamics of internet interactions versus in real life.

After she asks her troll to say the hurtful words from online several times to no avail, he finally does, and for the audience and Lina’s character, it felt more like desperation. She probably realized that she let the words have more control over her than she should have, when his utterance of the words did not give her the closure she was desperately searching for. That was one of the most powerful moments in the short.

In an exclusive interview with The Hollywood Times, Javier Marco spoke with me on this short film, as he continues to submit it to different film festivals around the world. I suggested that we have a huge Spanish market in the United States, such as in Miami and Los Angeles. But he is taking this everywhere, as he prepares for production on the full length feature of “A La Cara”. I found out that many of my unanswered questions will be addressed in the full length feature, as Javier said, we would dig into the characters’ backgrounds.

There will be consequences to the troll and he himself will be thrust into fame and we will follow that journey as the tables are turned. We will also see more of a background of both characters and see why he became a troll and how it didn’t start that way. He found he had a “talent” in trolling and then it became a runaway train of negativity. “I hope one day we don’t have to make this kind of film to address this issue, but I wanted to explore how can we stop this kind of behavior,” Javier said. And the feature film will explore this solution.

Javier was inspired by some social media incidents in Spain where threats got out of control, which led to public meltdowns and disruptions, and in some cases suicide. He believes the best way to deal with it is to laugh it off, but when threats become intense, suicide is a potential and real result. Javier wants people to understand the impact of their words but simultaneously didn’t want to see free speech being curtailed and believes it’s inevitable we have to deal with these dynamics.

Right now, Javier is focusing on the November 5th release of “Josefina”, his first feature length film. It is a film he started in 2015, and premiered in May at a renown Spanish film festival. His debut work is about two lonely people without a purpose in their 50’s who meet each other and eventually find that purpose along the way. It tracks the growing love between a woman and a prison guard. This story was inspired by characters he met on a trip. The drama and love story is not yet available on streaming but we will hopefully catch it in a film festival when it arrives Stateside.

It is clear Javier’s films and stories focus on a strong emotional content and great acting performances and interaction. Independent films are close to his heart.  “I like films with great stories and a relation to the human beings, and to talk about social issues, stories that we can relate to and touch our heart, make us laugh and make us cry,” Javier says.