It was held this past Saturday, July 21st

Dallas, TX (The Hollywood Times) 7/23/2018 – “I have never been to a wrestling match and I get to bring J.R.’s hat into the ring,” Charlene Tilton, special guest star of the event told The Hollywood Times before the match started at Southfork Ranch.

Those scheduled to appear where:

As my photographer, James Johnson and I traveled four hours to Dallas, Texas my thoughts were, understanding why I was so excited to take on this assignment for The Hollywood Times.

I didn’t know anything about pro-wrestling. I am completely against any type of ABUSE being the Founder of a non-profit organization called P.A.I.N. Prevent Abuse in Neighborhoods. Deciding my interviews would focus on why these guys and gals do what they do and have such a passion for it.

I did know Charlene Tilton, who was the special guest. Just having the opportunity to see the Southfork Ranch, where the show had been filmed and is now a wonderful tourist attraction, was going to be the highlight for me I thought.

Click here for information about tours of Southfork while visiting Dallas, TX: https://www.southforkranch.com/

This was an event with a theme.

Who stole JR’s hat from the mansion and was it going to go to Canada or stay in Texas at the ranch.

The first interview was with Jim Ross. He was at his table signing his number one selling book “Slobberknocker” and selling his famous barbeque sauce and beef jerky. He was the Announcer for WWE for over 25 years. Jim is a three- time Hall of Famer. He now works with AXS TV with Mark Cubin to Broadcast Wrestle Kingdom. 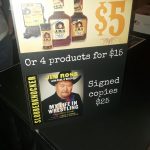 We then headed for the Mansion House for the filming of “Who Stole JR’s Hat?”

Charlene Tilton and John Morrison starring in the short filming.

Charlene is adorable and a delight to interview. She is not a wrestler, as many thought she was, since she was going to be in the ring. LOL!

We talked about her living in Nashville now and her daughter Cherish’s music career.

Cherish Lee visited the MusicRow offices on Halloween (Oct. 31, 2017) to perform tracks from her upcoming project, including “Tequila Cowgirl,” “The Ones You Leave Behind,” (written about her Brother’s death) and “This Ain’t Your Grandma’s Country Song.”

Lee is the daughter of country singer Johnny Lee and actress-singer Charlene Tilton.

I had met Charlene at the Hollywood Show 2015 in Los Angeles. It was nice to catch up on her new life in Nashville.

John Morrison was a great choice for the highlight wrestler and film star. He is a film major and produced, directed and starred in his movie “Boone the Bounty Hunter”.

John will be on Survivor TV Show this Fall 2018. John left WWE 2011 and is now with Impact Wrestling.

John met his wife Taya Vulkyrie at a match. You can tell sparks are flying as they share their life other than wrestling. Taya is a dance and theater major and every match is like a performance of the arts. They love being able to sit and just throw their ideas around and make a great production. To them they expressed seeing family and friends come together to enjoy entertainment, which is what pro-wrestling is all about.

NOW to the wrestling ring!!! Oh my goodness my heart is beating fast not knowing if someone will be hurt.

Justin Roberts is the Announcer for the evening. 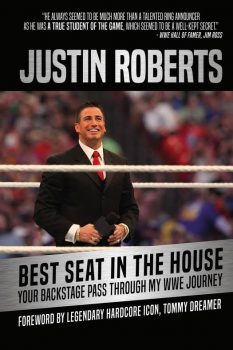 Matt Striker is a former teacher. His interview intrigued me as he has a different approach by using his brain to win the match.

Matt was with WWE for 10 years. His most interesting match was with the Undertaker who is 6’10”. Amazing indeed, since Matt is 5’10” which made that definitely a memorable match for the fans.

Matt is now the commentator for the Mark Burnett Lucha Underground show. Each episode has a story line. I sure don’t promote violence but as I shared my book “U Can 2” sometimes being “a light to darkness” is what people need to hear.

Matt was telling me that one storyline was about a female wrestler winning the match and empowers other women against domestic violence. “Unmasking the PAIN Within” talks about hiding behind the mask of PAIN which I can relate to being my journal for my life story about Domestic Violence. Matt lives in New York and wrestled MVP that night.

MVP served 9 ½ years in prison and pro-wrestling is what turned his life around. He is from Miami and had a turbulent childhood and joined a gang at the age of 12.

A correction officer noticed his size and athletic ability was his mentor and encouraged him to have a career in pro-wrestling.

His most memorable match was with Chris Benoit.

His passion is being a rapper. He has released several Hip Hop tracks.

Entertaining were The Brothers Marshall and Ross Von Erick the sons of pro-wrestler Kevin Von Erich.

Marshall Von Erich and Ross Von Erich: Current World Class Tag Team Champions and third-generation members of the famous North Texas Von Erich family, including their Grandfather Fritz Von Erick. These two young men are very handsome and personable. They stood by their table with a long line of fans waiting to take their picture with their championship belt hanging it on their fans shoulder for the picture. A very good influence for the young crowd to follow.

Several other matches continued with the families being entertained with the outrageous personalities including the famous Scott Steiner which took pictures with the fans during intermission in the wrestling ring.

After the line ended I got my turn in the wrestling ring to get my picture with Scott. Whoa, I am not even a wrestler and I felt the intimidation. LOL

Final round was with 20-year Canadian pro-wrestler PCO which is referred to as Not Human. A video shows him as Frankenstein. He actually stole JRs hat and taking it to Canada if he wins!

His opponent John Morrison (Bounty Hunter) was the hero and won the match. JRs hat stays in Texas at the ranch. Jim Ross came to the ring saying he wanted to be Charlene Tilton’s (Lucy Ewing) new JR.

A big Hoorah to Imperial Wrestling Revolution CEO Jerry Bostic for an unforgettable evening of entertainment. The venue Southfork is an incredible place to book your next event. Janna Timm was the best host. 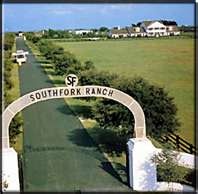 History at Southfork began in 1978, when Lorimar Productions chose the North Texas showplace as the site for the CBS TV series Dallas.

The series continues to be broadcast in syndication and still is in first-run status in many countries around the world.  Because of the ranch’s high profile on television, the beautiful white mansion, the pool, the barns and surroundings quickly became a tourist mecca.

The original owner of the ranch and his family were actually living at Southfork Ranch as the filming began. When requests for private parties began to pour in, tents were erected and a small party pavilion was built to accommodate these types of events.

After years evolving as a tourist attraction, the owner opened the doors of the Ewing Mansion to the public and the expansion of the ranch as a event center began in 1985. A 63,000 square foot conference and event center was built to accommodate several thousand people for special events and functions. A rodeo arena, which was originally constructed for the filming of Dallas rodeos, began to host open competition rodeos as well as private showdeos.

In June of 1992, Rex Maughan, a successful Arizona businessman with extensive company operations in Texas, purchased the ranch. Maughan was a client of Southfork’s, hosting events several times a year for business associates from around the world. Since Maughan’s purchase, business has continued to grow. Tourists are still attracted to the nostalgia of Dallas and Southfork’s unique facilities have created an internationally respected conference and event center for meeting planners. 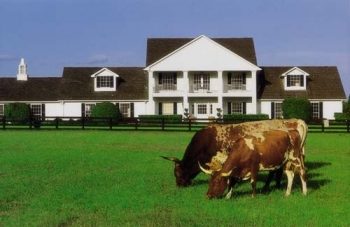 Never envisioned to be the winner it became, Dallas was initially scripted as a non-continuing five-part drama. Airing for the first time on April 2, 1978, it ran for five consecutive Sunday nights. Ratings climbed weekly. By the fifth episode, it ranked in the top ten of the week’s most watched shows.

On the basis of these impressive numbers, CBS approved thirteen additional scripts and “Season One” officially began the next full season. The success of Dallas continued, with the show airing for 13 seasons until May of 1991. By this time, the series included 356 episodes and had become the most watched series in the world, and had spawned a successful spin-off series in Knots Landing.

In 1995 and 1997, Dallas original cast members including Larry Hagman, Linda Gray, and Patrick Duffy returned to Southfork to film two reunion movies. The first reunion movie JR Returns aired in 1996, and the reunion sequel, The War of the Ewings, aired in 1998.

In the summer of 2012, Dallas again returned to Southfork Ranch for TNT’s reincarnation of the series, bringing back both original cast members and new faces. The show aired for three successful seasons.