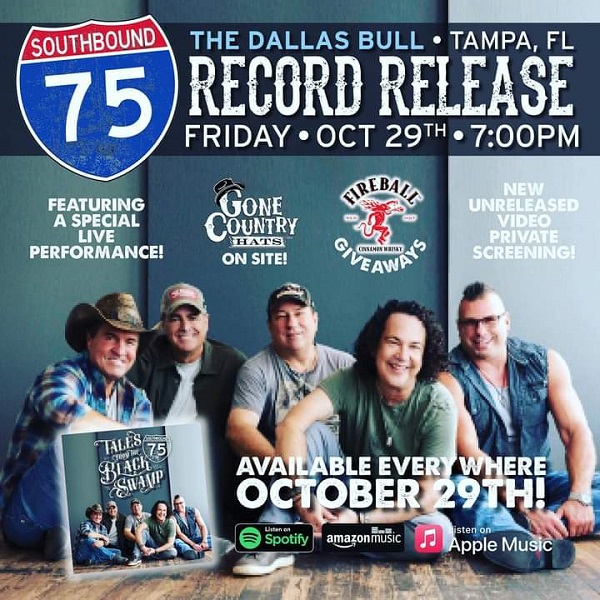 The band’s single “Spilled Champagne” music video premiered on the Country Network all week and was featured on CMT’s “The Roundup” playlist on Spotify that includes the week’s biggest releases. Playing on 45 radio stations so far! Other songs on the new cd “Stumble”, “Daddy’s Liquor Cabinet”,” Not Ready to Say I’m Sorry Yet” and  “Whiskey and Wine.”

Southbound 75 played their first show in December of 2018 and are making a name for themselves. They played from Ohio to Key West, been invited to play the Suwannee River Festival and played multiple shows at the Florida State Fair.

Mark Lorenzo is the lead singer and songwriter. He had been writing rock songs for years, with successful placings on TV shows and sports programs. He also had an active career as a touring musician in a rock band. After the band started playing in country bars Mark realized he liked telling stories and making the music more fun. He listened to country music growing up with his Mom.  Mark is originally from Ohio.

Mark’s Quote “I wish someone had told me to not play it safe and to take more chances. Don’t worry about what people think and you will be a success.”

Kevin Doris is the rhythm guitar player, occasionally banjo player and sings backup vocals. He was inspired by his father who encouraged him to reach for his dreams and work hard to fulfil them. Kevin is from Jacksonville Florida.

Anthony August is the lead guitarist. Originally auditioned to be the drummer. Anthony also plays the bass guitar and Mandolin. He moved to Tampa from Dallas Texas. Anthony is passionate about teaching others. He teaches music students all over the country.

Gregg Giacobbe is the drummer and was inspired by his neighbor in Illinois who also played the drums. He met Mark and Anthony about 4 years ago. Gregg is sponsored by Bosphorus Cymbals, creators of 100% handmade cymbals.

Vance Eskesen is the bass player, who grew up listening to old country music like artists Alan Jackson and Merle Haggard. I really hear that in his voice as he sings backup vocals. He grew up in Colorado.

I really enjoyed being in the green room interviewing this group of seasoned musicians that know what they want in life. Each one has a great story of what they experienced in the music world  to now become part of Southbound 75 rising stars!

Southbound 75 will be making an impact in the community with the release of their Christmas song “Where’s Santa Now” collaborating with P.A.I.N. Prevent Abuse in Neighborhoods. 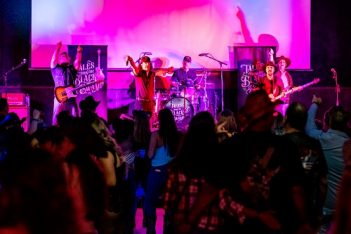 I recently moved to Tampa, Florida from Oklahoma. I was in search of finding that good country band to listen to on weekends.  Not only good music but a Halloween party with the fans of Southbound 75. This was my first time at the Dallas Bull, Tampa’s premier Country Club. Many artists such as Luke Bryan, Kenny Chesney and Jake Owen have all performed at the Dallas Bull. Tracy Byrd will be performing Nov. 12th.