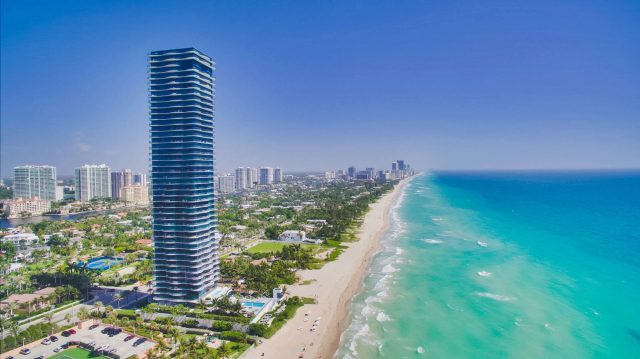 Motel Row is now gone, the condo development frenzy of the early 2000s saw the demolition of the family-oriented motels that lined both sides of A1A for decades.  Torn down and replaced with a line of glitzy highrise condos with their fancy penthouses that began to dominate the skyline: The Pinnacle, Acqualina, Trump Palace, Jade Ocean, and the Trump Towers I, II and III. Long gone are the casual lodgings where kids could run in and out with sandy feet whooping and hollering.  One of the most glamorous of the penthouses is Regalia, now going to auction on December 16th. Regalia was built in 2016 on the site of a 1960’s-era Holiday Inn that advertised on their iconic sign that it was air-conditioned with free television, a restaurant and a cocktail lounge. Regalia was originally priced at $39 million, now listed at $25.5 million.