Los Angeles, CA (The Hollywood Times) 2/24/22 – Paolo Sorrentino’s The Hand of God (Italy, 2021) has screened at selected theaters and in December at the Los Feliz Theater in Los Angeles, Sorrentino was present for the screening of his film and offered his insights and reflections in a Q&A after the screening hosted by the American Cinematheque. The film premiered at the Venice Film Festival a few months back and has been selected as Italy’s submission for the Best International Feature Film at the Oscars in 2022. It is now streaming on Netflix. In The Hand of God, Sorrentino depicts his defining moments in Naples in 1984 – the city he knows best and where he grew up. Fabietto (Filippo Scotti), the autobiographical hero of Sorrentino’s film, is a teenager growing up in 1980s Naples, and he keeps a watchful gaze on just about everything. He’s like the eye at the center of a storm of avidly impassioned filmmaking.

At 16, Paolo Sorrentino returned home to find that both his parents were dead, killed by a carbon monoxide leak. On the night of the tragedy, Sorrentino was inside a football stadium, watching Diego Maradona play for his local team, Napoli. Afterward, he would say – not wholly joking – that Maradona saved his life – as if Maradona was “the hand of God.” More than three decades later, in the middle act of a career that has already won him an Oscar, the Italian filmmaker has retraced his steps, turned back the clock, and fashioned this foundational horror of his life into a fevered coming-of-age tale. The Hand of God is Sorrentino’s most nakedly personal film to date, almost to a fault in the way it jettisons the cool distance of The Great Beauty or ll Divo in favor of a sweaty, close-up evocation of youth. It’s a picture only Sorrentino could make and, being so personal, is at times a bit self-indulgent.

Filippo Scotti, the actor who plays Fabietto (the teenage Sorrentino), is handsome in a pale way, with curly hair and a presence that’s elegant in its quietude. There is some similarity to Timothée Chalamet in appearance and physique. The year is 1984, and Fabietto is a kid who knows how to fit in but still sets himself apart. He wears a small hoop earring (not so common back then), and he has a Walkman whose earphones are always draped around his neck. In the cracked asphalt field at the Salesian high school, the boys playing football come off, in comparison, like rambunctious zombies. Yet Fabietto, in his way, is as much of a sports fanatic as they are. There are rumors that Diego Maradona, the Argentine football superstar, is about to join the Naples team (the rumors turn out to be true), and for Fabietto, like everyone else in Naples, it’s as if Jesus himself were about to arrive.

Sorrentino has a regular collaborator Toni Servillo masquerade as his dad, but for a while, he’s content to have both Fabietto and his father Saverio lost in the mix, part of the big, noisy Schisa family. The director immerses himself in the milieu to the point where we can almost smell the aftershave and tobacco. He is summoning up a kind of sun-blasted lost Eden, vulgar and vital and burnished by his memory. One suspects it grows more golden, more vivid with every passing year. It’s easy to sympathize with Fabietto, because he’s got a sly, pensive curiosity that you can tell will take him places. For most of the movie, however, the places he goes tend to involve his extended family, as well as the occasional scoundrel he hooks up with in town. It’s easy to feel that Sorrentino is pulling what you see directly out of his diary because the action is loose, quirky, and anecdotal.

Most of the members of the extended Schisa family are presented in a way that’s raucous and overly broad – like, for instance, Fabietto’s embattled Aunt Patrizia (Luisa Ranieri), a beauty who flirts with him, or her husband, Franco (Massimilliano Gallo), who’s convinced that she’s a “whore” and responds by screaming at her and beating her up, even though she makes it clear that all she really wants is to have a child. It’s not that this kind of abuse isn’t “real.” It’s that the movie shoves it in your face so that it’s less than convincing. At a get-together in the country, the relatives berate each other with the glib high-volume toxicity of characters out of a bad Lina Wertmüller film.

The scenes with Fabietto’s parents strike a more compelling note. His father, Saverio (Toni Servillo), is an ebullient older chap who works in a bank but still considers himself a Communist. The family lives in a modest apartment complex, where Fabietto and his older brother, Marchino (Marlon Joubert), share a dingy bedroom, and where the family gathers around a small TV set that Saverio changes the channels or by poking it with a stick (he’s too much of a Communist to buy a remote). Fabietto’s mother, Maria (Teresa Saponangelo), loves to stage practical jokes, and she and Saverio seem quite lovey-dovey until it’s revealed that he has a long-term mistress, at which point Maria fills the apartment with screams of agony, which sets Fabietto to shaking so badly that he seems on the verge of a seizure. 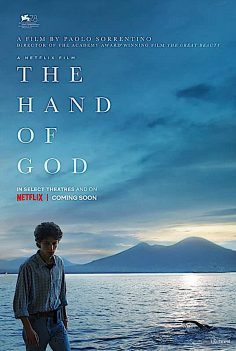 Watching The Hand of God, it is hard not to be reminded of a certain other autobiographical drama by an Italian filmmaker: Fellini’s Amarcord (1973). That movie, for all its wistful dream-time nostalgia, had its own rather broadside, and a male-gaze lustiness that Sorrentino echoes, notably in the scene where Fabietto finally loses his virginity. It’s with a character we would have least expected him to do that with – and there’s something bracing about it, because the actress, Betti Pedrazzi, is superb, and it has the feel of a true experience. There are other moments with that quality, like the one where Maria says of Marchino, “We’ve lost him” (because he’s got a girlfriend now), and we see the sadness with which she’s watching her sons grow up.

Fellini is actually in this movie (or, at least, his voice). Machino, an aspiring actor, goes to audition for a new Fellini film (in the waiting room, everyone is dressed like their idea of a Fellini extra), only to be told by the maestro that he looks like a waiter. But just the momentary proximity to Fellini lights a spark in Fabietto. He decides that he wants to become a film director, a desire enhanced when he watches the shooting of a movie in the middle of town. Yet it’s an odd thing: We know, of course, that Paolo Sorrentino did go on to become a filmmaker, but nothing in Fabietto’s presence suggests that he had a real interest in filmmaking in his early years or even what it is about being a director that attracted him. At the Q&A after the screening, Sorrentino explained that his older brother’s Fellini audition occurred much earlier in his life – when he was about 8 years old.

When tragedy strikes, Fabietto is bereft, bouncing off the hospital walls, struggling to make sense of it all. No doubt Sorrentino is still doing the same, figuring out the ways in which his parents’ death shaped him, made him who he is today. So he has Fabietto decide, seemingly out of the blue, that he wants to direct films. He gives him a muse (his Aunt Patrizia) and a mentor the director Antonio Capuano, (played by Ciro Capano), who sets him on the right path. One day, we assume, the kid will win an Oscar of his own. In the closing scene, it is the Neapolitan director Antonio Capuano (played by who encouraged young Paolo Sorrentino to stay in Naples and write a film about his city – which, of course, actually happened, and resulted in him penning the screenplay for Polvere di Napoli (The Dust of Naples, 1998), directed by Capuano. The seemingly significant quote from Fellini that “reality is boring” is not Fellini at all, but Sorrentino posing as Fellini. 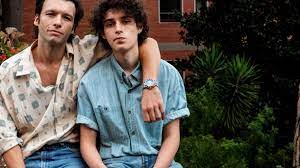 The bawdy vigor of The Hand of God seems to come out of the Fellini handbook but fully embraces an adolescent love of garish caricatures and crude sexual politics. As Sorrentino sees it, the first half of the film is a high-jink comedy, and the second half one informed by tragedy, a sense of loss and hopelessness. In the end, a few adults step in to show young Fabietto that he needs to look to the future and not dwell on the past. He was spared his parents’ fate by “the hand of God” and somehow survived and prospered.