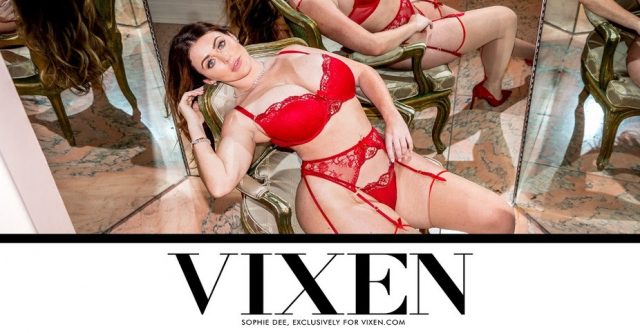 (Los Angeles, CA / August 21, 2019)  – Adult superstar Sophie Dee was a big winner at the industry’s esteemed Urban X Awards Sunday night, taking home the coveted trophy for 2019’s Cumback Star of the Year.
After an extended break from the business, Dee’s fans came out in full force to cast their votes for the blue-eyed beauty from Wales, “proving that absence really does make the heart grow fonder!” she said after the show.
“I can’t thank the team at the Urban X Awards – and the fans who voted – enough for this award,” said Dee, who also hosted the red carpet for the Los Angeles-based event, celebrating ‘diversity, creativity and unity’.
“This is a very welcoming industry, and I’m so proud to be a part of it, take a break away and explore other opportunities, then make a ‘cumback’ that brings me an award!” joked Dee. “Remind me to leave more often!”
Connect with Sophie Dee at:
sophiedeesnaps.com
Twitter.com/sophiedee
FanCentro.com/SophieDee
Instagram.com/sophiedee
OnlyFans.com/SophieDeeLive
Snapchat.com/Realsophiedee
Sophiedeestore.com
Mysexyauctions.com/sophiedee
ABOUT SOPHIE DEE:
Sophie Dee is an adult performer, director, model, mainstream actress, dancer and media personality who launched her career in 2005 after moving to Los Angeles from her native Wales. The auburn haired beauty soon found fame in adult production, starring in hundreds of films on behalf of nearly every studio in Porn Valley, gaining legions of fans and trade awards for excellence in the adult industry.
The star is spending more time with her fans these days, appearing in live shows on the Fan Centro and Only Fans platforms while also acting in independent mainstream films (including Sony Pictures’ The Hungover Games, Danny Glover’s Bad Assesand Marlon Wayans’ A Haunted House 2).