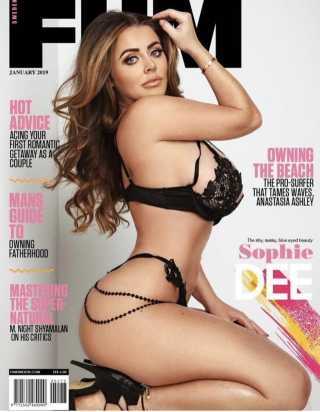 he dazzling adult performer, outfitted on the cover in an eye-popping lacy black bra and panties ensemble, flaunts her amazing figure in an impressive multi-page pictorial shot in the warm California sunshine by Ryan Dwyer and produced by Mainstream Productions.

“I grew up with FHM as the quintessential ‘lad mag’ in the UK, so it means a lot to me to represent the brand on the cover and in the pages of their Swedish edition,” said Dee of the men’s magazine’s colorful spread.

Dee is seen lounging glamorously poolside in a white bikini, busts out of a green swimsuit in the front seat of (and next to) a classic roadster and poses seductively on the beach, barely covering her incredible assets.

“The shoot was lovely and a lot of fun, and the cover and pictorial photos turned out beautifully; I hope fans love the layout as much as I loved shooting it!”

Connect with Sophie Dee at:

The star is spending more time with her fans these days, appearing in live shows on the Fan Centro and Only Fans platforms while also acting in independent mainstream films (including Sony Pictures’ The Hungover Games, Danny Glover’s Bad Asses and Marlon Wayans’ A Haunted House 2).