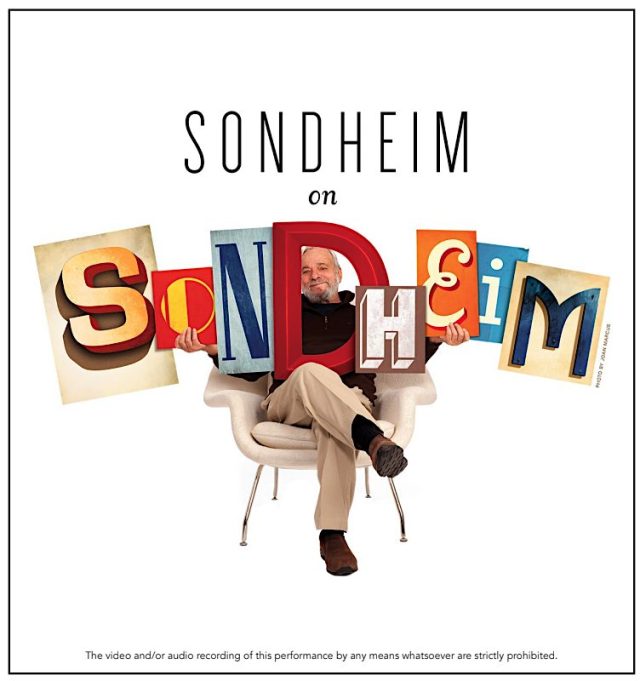 Los Angeles, CA (The Hollywood Times) 5/29/22 – Saturday, May 28, at the Ophelia’s Jump Theatre in Upland/Claremont was a production of the musical revue Sondheim on Sondheim. Originally conceived and directed by James Lapine in 2010, the show consists of music and lyrics written by Stephen Sondheim for his many Broadway shows. The original show featured some narration recorded by Sondheim but the revision in 2008 was structured as a multimedia revue, “original and archival commentary” from Sondheim. The revue was promoted as taking audience members “to the very heart of Sondheim’s life and work.” The musical features taped interviews with Sondheim projected on a large screen behind the stage. The production of Sondheim on Sondheim at Ophelia’s Jump, as directed by Beatrice Casagrán, follows this multimedia revue format. The musical features taped interviews with Sondheim. The show at Ophelia’s Jump in Upland runs May 20 through June 5, Fri. & Sat. at 8:00, Sun. at 4:00. Also, Thurs. June 2 at 7:30. Ophelia’s Jump is located at 2009 Porterfield Way, Suite I, Upland, CA 91786. General admission: $35. Reservations: (909) 734-6565. Online ticketing: http://opheliasjump.org

The songs in Sondheim on Sondheim including well-known, less-known and cut material – from nineteen Sondheim shows (including student shows) produced over a 62-year period, including several songs each from West Side, Story, Company, Follies, A Funny Thing Happened on the Way to the Forum, Sunday in the Park with George, Merrily We Roll Along, Passion, and Into the Woods. Lapine described his version of the revue as “a kind of impressionistic view of him that’s put together with pieces of archival footage and interview footage. It’s a collage of his life, in which who he is and how he got there comes into focus.” The staging at Ophelia’s Jump was done with the stage in the center, surrounded by seating, in a new, partially-finished performance space that works well in terms of playing to the audience.

Musical accompaniment on the piano throughout the entire show was provided by Bill Wolf, as the ensemble of nine performers: Jordan Araña, Camilo Castro, Brittany Hanson, Chanlon Kaufman, Jenny Lockwood, Caitlin Lopez, Kara Masek, Christofer Sands, and Liana Rose Veratudela. The production opens with “Forget War” and “Love Is in the Air” – which were later scratched from the original production of A Funny Things Happened on the Way to the Forum (1962) and replaced with the lively “Comedy Tonight.”

The taped interviews with Sondheim and archival footage and photographs introduce us to the young Jewish boy who was an only child with an unsupportive mother and a father who left when he was 10. Fortunately, young Stephen Sondheim grew up in a neighborhood near the Broadway composer and lyricist Oscar Hammerstein and Stephen spent much of his time at the Hammerstein house, where he learned so much about music and composing from the very successful empresario in musical theatre. In many ways, Oscar Hammerstein was both a mentor and a surrogate father from young Sondheim. Later at the opening of South Pacific, he met Hal Prince, who would later direct many of his shows.

His first big break came the opportunity to work with Leonard Bernstein on West Side Story (1957) at age 27, with the song “Something’s Coming.” It is performed here with a quartet of singers: Jenny Lockwood, Chanlon Kaufman, Christofer Sands and Caitlin Lopez. A real pleasurer is the duet “You Could Drive a Person Crazy,” from Company (1970), featuring Jenny Lockwood and Jordan Araña. Quite amusing was the version of “The Wedding is Off,” also from Company, with Kara Masek and Caitlin Lopez hamming it up.  In this same set is “Now You Know,” featuring Liana Veratudela with the Ensemble. The amusing rendition by Christofer Sands brings Sondheim’s song about the music business to life with “Franklin Shepherd, Inc.” from Merrily We Roll Along. Sondheinm and Hal Prince did six shows together over the years.

Stephen Sondheim never married and, although he often wrote love lyrics, he really did not consider himself knowledgeable about love or marriage. In the taped interviews on the big screen, Sondheim explains that “his first serious relationship happened at age 60.” And some of that intense feeling went into his music and lyrics for Passion (1994), adapted from Ettore Scola’s 1981 film Passione d’Amore. with the song “Happiness” sung by the Ensemble. Of course, the beautiful “Loving You” is a torch song, of sorts, which features the voice of Kara Masek. Closing out the first act was the energetic “Ever After/A Weekend in the Country/Sunday, performed by the Ensemble.

Sondheim wrote a new song for this revue, titled God, a “self-deprecating comic song” sung by the company to open Act 2. Then comes the beautiful “Losing My Mind/Not a Day Goes By,” performed by Gaitlin Lopez and Jenny Lockwood, a true “torch song” with the refrain “Am I just losing my mind / Or Are You Just Being Kind.” This song from Merrily We Roll Along (1981) was followed by the lively “Opening Doors,” with most of the Ensemble – a piece that Sondheim said was the only autobiographical one he ever wrote.

Returning to the musical Company, comes a series of solos – “Multitudes of Amys” with Christofer Sands, “Happily Ever After” with Jordan Araña, and “Being Alive” with Chanton Kaufman. According to Sondheim, Company was a show with three endings. A real Broadway-style show-stopper is “Ah But Nothing Underneath,” from Follies, with Brittany Hanson teasing out the role with the men in the Ensemble surrounding her dance moves with their blue ostrich feather fans.

Sondheim in his interviews explains that his lyrics are not meant to be poetry, which is often quite dense in meaning. Music lyrics must be simple to be understood easily. Jenny Lockwood delivered a lovely rendition of “My Buddy’s Eyes” from Follies: Life is slow but it seems exciting / ‘Cause Buddy’s there. / Gourmet cooking and letter-writing / And knowing Buddy’s there.”

A bit of surprise is the “Gun Song,” from Assassins (1990), which Sondheim considered to be one of his best. The singers Camilo Castro, Chanlon Kaufman, Jordan Arañas, and Caitlin Lopez packed a lot of humor in their rendition of this piece. Soon we arrive at the song “Beautiful,” a powerful duet by Caitlin Lopez and Christofer Sands, from Sunday in The Park with George (1984). The song seems very close to the heart of Sondheim in his fractured relationship with his own mother. Even more so, is the troubling “Children Will Listen” from Into the Woods (1987), which seems to capture Sondheim’s sense of never being wanted by his own mother.

As we roll to the end of the show, we finally hear the signature piece by Sondheim from A Little Night Music (1973) – “Send in The Clowns” which every major singer on Broadway dreams of singing. It was performed by walk-on Angelina Carr this evening in a touching rendition of this seeming farewell to a career. Closing out the show, the Ensemble gathered to sing “Old Friends” from Company: “This is magic if you whistle.”