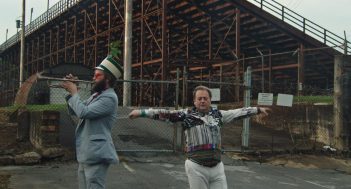 Los Angeles, CA (The Hollywood Times) 8/17/21 – In the Platinum section of this year’s Outfest 2021 and screened at the REDCAT in downtown Los Angeles was a film from Bo McGuire entitled Socks on Fire (2021). An example of a mixed genre “documentary/narrative hybrid,” McGuire stitches together archival family footage shot on camcorders with florid stage recreations of family history, using actors to play various family members. Socks on Fire is basically a family drama built around the death of the matriarch of a large Southern white family in Alabama. That woman, referred to as Nanny, passed away with no will in place, so the family is torn apart by a bitter battle over her estate. The hybrid form makes it a bit challenging to follow the narrative, but eventually we come to understand that Bo McGuire is making a documentary about how old family wounds are opened as the family’s once beloved Aunt Sharon has turned into a bitter religious homophobe and determined to cast out her gay, drag-queen brother John from the family. There is much lyricism in this Tribeca prize-winning film that gives us an intimate family portrait of growing up queer in the South.

Is the story truly compelling? That might be asked. Socks on Fire is an ambitious attempt at telling a story about a family who live in a rural Alabama town and how queer people manage their lives within that seemingly tight family and community structure. McGuire narrates the film with a heavy Southern drawl, opening with the loaded question: “What do you do with what the dead leave behind? Do you fight for it, or do you set it on fire?” These heavy-handed poetic musings provide the backbone of McGuire’s familial excavation, which charts the inheritance drama following the death of his grandmother, whom he calls Nanny. McGuire himself appears often in a powder blue suit and floral Hawaiian shirt, sporting a shaggy beard and smoking Virginia Slims. Appearing in the film alongside McGuire are his mother, godmother, uncle John, and aunt Sharon; the latter two and Nanny also show up as their younger selves, played by actor stand-ins.

Possibly the most interesting thing that McGuire does in the film is to have a queer male actor by the name of Chuck Duck play Aunt Sharon, completed with boobs and a feathered wig. This Aunt Sharon is always complaining about her brother John the drag queen and how he is supposedly stealing things from the house of the deceased grandmother, who intended for John to inherit her house upon her death. This Chuck Duck plays two parts – Aunt Sharon and also John the drag queen. He is probably at his best as John the drag queen wearing Aunt Sharon hair and make-up, relating how he frequented a gay leather bar in Birmingham and once blew a disabled guy while the man’s wife watched. The actual Uncle John is probably the most interesting figure in this Southern family, because he was the target of his Aunt Sharon’s ire and the center of the familiar conflict. He lights up the screen with his flashy red gown and twirling his batons. John is from an older generation of Southern gay men and his story deserved more development.

As for the filmmaker and narrator of Socks on Fire, we never get a clear understanding of his life, although he asks his own mother Susan and his father what they know and understand about him. McGuire is also gay, but we don’t get much insight into what that means in his life. For a short while, he breaks out of the narrative to interview some of his former teachers – all women who seemed to have had an impact on his life. Topics are introduced and then dropped, but at least we do get to experience some of the dynamics of a Southern family with members who are gay.

Socks on Fire was part of this year’s Platinum Series at Outfest 2021, along with Lyle Kash’s impressive trans comedy Death and Bowling, and the collection of short films gathered together as the “Platinum Showcase.” There is a separate review about Death and Bowling on this website. There were some 12 different short films screened at the REDCAT for this series. Paul Reubens (Pee Wee Herman) appears as a transforming fish in JB Ghuman’s The Crown and the Shadow, and penises sing in Woohee Cho’s NSFW (Angry Yellow Meat). This was a short exploration of a New York City romance in Tristan Scott-Behrend’s The Man of My Dreams, and an evocation of desire, religion, race, and gender in Georden West’s Exorcisms and Other Supplications. These and the many more films in this program represented the edgier aspects of LGBTQIA+ art and culture.