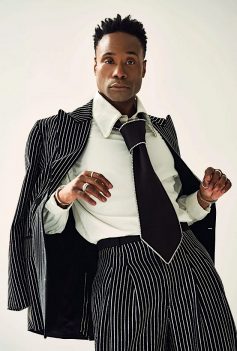 Los Angeles, CA (The Hollywood Times) 8/14/21 – The line-up for films on Saturday, August 14, at Outfest 2021 is jam-packed but if you have a chance, make sure you get a ticket for a double-bill of two fine medium-length films: Smoke, Lilies and Jade (28 min., 2021) and All Boys Aren’t Blue (40 min, 2021). Both films sparkle with  visual poetry and address the issues of Black masculinity and Black queerness. They screen back-to-back at the Harmony Gold Preview House on Sunset Boulevard on Saturday, August 14, 6:15 pm, with a red-carpet appearance beforehand. The first Smoke, Lilies, and Jade is set in 1926 at the height of the Harlem Renaissance and based on a short story by a Black gay writer Richard Bruce Nugent. The second film is based on a memoir-manifesto by a contemporary Black non-binary writer George M. Johnson. Black people have always had to wear a mask. Many call it “code switching” but it’s the inability to be our truest selves when we are in certain environments that are dictated by society norms, whiteness and principles of respectability politics. Writes George M. Johnson, “When you are someone who lives with multiple identifiers such as black and queer, you don’t always have the luxury to show up as all of them in certain spaces.”

In Smoke, Lilies and Jade, directed by Deondray and Quincy Gossfield, we first meet an aspiring young Black writer and artist named Alex (Xavier Avila) who is reciting a poem in front of small gathering of fellow writers and artists in Harlem in 1926. His friend Raymond (Harry Fowler) is there, as his Alex’s girlfriend Melva (Alexandra Grey). In a voice-over as the narrator of the story, we heard the voice of actor Billy Porter: “Back then they called it the Harlem Renaissance back then Negroes getting over. I did what I wanted.  And I find it ironic that I may go down in history as something I never was: A homosexual. It was more complicated than that.” Porter assumes the voice of the narrator in the film and indirectly the voice of the story’s author Richard Bruce Nugent, who among the gay Harlem artists of that period, was among only a few who were publicly out.

The night is young and we soon learn that Alex likes wandering the streets of Harlem in the wee hours, where “strangers don’t talk at three in the morning.” Alex happens upon a handsome man who does not give a name. They light up cigarettes and in their nighttime smoke, there is a heightened sense of physical attraction. He follows Alex back to his small apartment and there Alex seems awkward, not exactly knowing what to talks about himself as an unsuccessful writer. Nervously, he lights yet another cigarette, this time inhaling through a jade cigarette-holder that was a gift from an older man. He quotes Oscar Wilde: “Oscar Wilde said that a cigarette is the most perfect pleasure because it leaves one unsatisfied,” and perhaps the satisfaction will yet occur. The visitor (played by Colombian-born actor Ernesto Reyes) reclines on the bed seductively. Alex nervously gets up to grab a book of poetry by Langston Hughes and begins reading a poem that he feels describes this man in his room:

And a way with women like a sailor man.

For Alex, poetry is the highest form of expression, but he seems to know little about love, despite claiming that he has girlfriend named Melva. The more experienced visitor speaks at last: ”I can’t help it if people fall in love with me.  That is the danger of beauty. It calls to us.” And apparently that is just what happens to Alex: He calls the man “Beauty” as he nods off to sleep.

Then we enter a dream sequence with Alex in a garden filled with red lilies. This is the garden of the poem he recited earlier that evening in front of his literary friends. He first sees his girlfriend Melva in the garden but she walks away. Then he discovers this stranger he calls “Beauty.” In voice-over, the narrator Billy Porter takes over the story and relates the dream and parts of what transpire afterwards. As their bodies intertwine and Alex feels the hot breath of “Beauty,” we know that this is the beginning of something special, “the love that dare not speak its name.” 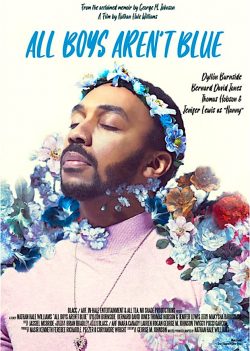 The next morning leads to the next day and evening, where we find Alex accompanied by Beauty at a local jazz club where a piano-player is singing: “Fire gonna burn up my soul.” As the hands of Alex and Beauty touch, Melva notices and gets up to leave. Apparently, Alex has found the love for which he yearned.

In an interview, the writer and producer Robert Philipson explains how he took the original short story by Richard Bruce Nugent and added a conversation between Alex and his friend Raymond about Raymond’s meeting with an older man in men’s room for a homosexual encounter, involving money – something that actually did happen to Wallace Thurman who was Nugent’s roommate from 1926 to 1918, and led to the publishing of “Smoke, Lilies, and Jade” in Thurman’s publication Fire!

A word about the accompanying film: George M. Johnson, the non-binary Black activist and journalist, recently wrote and published his memoir-manifesto All Boys Aren’t Blue in 2020: The book provides a detailed account of Johnson’s sexual experiences from childhood to young adulthood, I knew some parts needed to be a road map for younger people: “I wanted people reading to understand that we are conditioned really poorly around sex, consent, safety and what to do when put in those situations.” The color “blue” represents four things: The color which boys are supposedly be coded, as girls with pink; blue as the color worn by the police, as Johnson’s father was a cop; blue as character in Queen Sugar because he played with dolls; and the beauty of Black boys looking blue in moonlight in the movie by that name.

The film adaptation of Johnson’s book is directed by Nathan Hale Williams. Actors Bernard David Jones, Dyllon Burnside, Thomas Hobson, along with Jenifer Lewis bring Johnson’s words to life in this dramatic reading of his book, All Boys Aren’t Blue. Each of the characters represents Johnson at different stages of his life. The memoir is a firsthand account of trials, tribulations, and triumphs that led George M. Johnson to challenge gender identity norms, as well as learning to adapt to HIV/AIDS. This film screens after Smoke, Lilies and Jade.

The two films are bundled together under the title of All Boys Aren’t Blue, if you are having difficulty finding them on the Outfest 20201 website. The screening time at the Harmony Gold Preview House on August 14 at 6:15 pm. If you are interested in the films and not able to make it in person, consider a virtual screening which will be available 8/15 through 8/17. For tickets, live or virtual, go to: https://outfestla2021.com/all-boys-arent-blue/