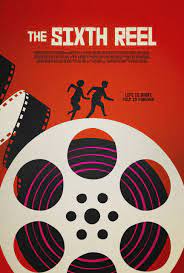 Los Angeles, CA (The Hollywood Times) 8/21/21 – On Thursday, August 19th, “Sixth Reel” was given the full red carpet treatment to a captive audience at OutFest, most of which stayed through the entirety of the movie.

On the initial red carpet, THT asked producer Jamie Buckner what he hoped the audience would walk away with. He said, “I just want people to laugh and have a good time, after we have been cooped up for a year and a half”. Well said. I feel the same way, as we now appreciate with a greater degree, the little things like going to a movie and feeling connected to the over 100 people in the theater, enjoying the experience together. I am all for crass humor, so I laughed out loud quite a few times as the movie provided some great moments. 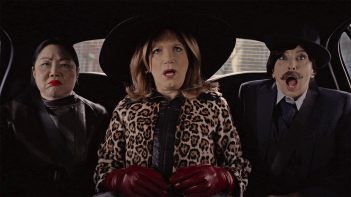 Having been a New York City resident myself for many years, and an Angeleno native, I enjoyed how this movie captured elements of both cities. The sets and meticulous detail did not go unnoticed, as I was brought back to Manhattan, the brownstones, the beautiful parks and the colorful characters one could spot just by hanging out in the summer. At the same time, the storyline revolved around film connoisseurs and their obsession with movies, creating ludicrous situations, bizarre love triangles and enthusiasm for entertainment, characteristic of Los Angeles. “Sixth Reel” balances East Coast and West Coast perfectly, as only a true bicoastal fan of movies would deliver in a fitting homage.

Humor can be a great movie endgame, of course, but in context of all of our serious society events in the past year, especially around race relations, there were a few things that gave me some pause.

The lack of minority representation was unfortunate to me. The black actor, Gavin, was given a short scene in the beginning, almost like an afterthought. He only reappeared in the end of the movie, as a stand-in. The only other minority actor was Margaret Cho’s, with her portrayal of Doris.  Her character seemed one dimensional and played to a tired “bitchy spinster” stereotype that felt like the movie colonialism Asians are so used to (Asians are notoriously underrepresented), with a dose of whitesplaining. Cho’s performance seemed tired and reluctantly accepting of this subordinate stereotypical position. When called a “miserable bottom feeder”, she simply took it with a stoic expression and deadpan delivered a line, saying her mother called her worse. Through that tough exterior, there was a genuine care she had for Jimmy, the main character, not made as salient as it could have been, and a pain that may have hardened her. There seemed to be a lost opportunity to bring that depth to the surface, which never ultimately manifested.

This was not the only lost opportunity. It almost feels that beyond the obvious sex jokes, if you strip away those, the substance, character building and plot twists were half-cooked.

An important reel is found in a fridge, and it becomes a goose chase like the “Perfect Score”, a movie that failed because the characters were not captivating enough. Slant Magazine critic Keith Uhlich called “Perfect Score” an “MTV film that extreme right-wing moralists can be proud of, as it posits a quintessentially American world of racial, intellectual, and sexual conformity.”  I feel the exact same way about “Sixth Reel”. This movie also posits a world of racial, intellectual and sexual conformity in the city, where there was very little racial diversity and everyone was pretty much the same, something tough to accomplish in a naturally diverse New York City. It’s almost like these characters were over-the-top caricatures, and their physical and sexuality attributes were a substitute for truly interesting and connective personalities.

Great movies inspire and stir the soul, even with humor. For example, even the basic Will Ferrell movies from “Dodgeball” to “The Campaign”, all have some ending where the underdog prevails. I see this was the attempt here with the talented Charles Busch’s character, Jimmy, but the execution fell short. The “hero arc” felt forced and Jimmy ended up being a cliche and I didn’t feel like I was rooting for him. Instead, some of the side characters felt more interesting and mysterious such as Helen and Doris.

That said, like Jamie Buckner said, this movie was here to entertain.  In that regard, with a great score, costumes, interesting sets and scenery and impeccable lighting, this movie succeeded. Indeed there were moments, like the sincere moment when Helen lost her husband. Or nuggets of wisdom from Margaret Cho’s character: “you only lose what you cling to”. Moments of refreshing self awareness such as Jimmy referring to himself as a “cranky spinster aunt”, were entirely fitting and humorous. Or the hilarious moment when the opportunistic villain sleeps with both Helen and Jimmy to get the reel. Both Helen and Jimmy dressed as different genders and came off endearing and believable.

Yet, overall, with moments that dragged on too long, the comedic pacing was off.  The over-the-top costumes the vampire couple were wearing was too over the top. Jimmy was good as Grace in the final scene but meeting corporate CEO Beltrane in the final scenes and having this quick “one year later” love interest build from nowhere seemed rushed and contrived.  So did the friendship with Rodney, who felt like each other would throw the other one under the bus in a heartbeat.

Helen, at one point, in the movie, asks about the reel, “Why is this movie of particular importance?” I ask the same of this movie but the answer is not immediately apparent. Even producer Buckner couldn’t give me that answer on the red carpet. Another producer Ash Christian may have had an answer but his early death at a young 35 prevents us from fully knowing. His passing brought Thora Birch to tears in her touching opening speech before the movie. Like Birch’s own “American Beauty” had signalled, death usually closes certain chapters and starts new ones. Maybe a new chapter will break away from overplayed cliches, and there’s a new era ahead for Outfest films, that speaks of the minority experiences and unifying ideals of perseverance, unity, love and friendship?  “Sixth Reel” left me wanting more.