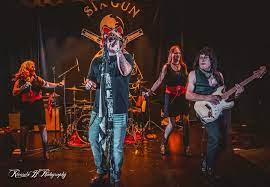 “Rebels and Rogues” Album by Six Gun Sal was released on Nov. 15 on all digital platforms such as Itunes, Apple Music, Spotify, Amazon Music, Pandora, and more

The album includes their rendition of the song entitled, “Hair of the Dog,” which was produced by Timothy Eaton, Multi Platinum Music Producer known for his work with Lynyrd Skynyrd, 38 Special, and Greg Allman, and many more musicians.

Other singles on the “Rebels and Rogues” Album are “Brother Hush,” “Walk Away,” “Asphalt Cowboy” and “Whistle Blows.”The singles “Take Me Home” and “Mama Said” from “Rebels and Rogues” were produced by Dan Malsch who has worked with hundreds of bands from North America, Europe and South America including Tantric and Doro Pesch.The new album follows the success of “West of Heaven” and “Red Blooded American.”

The first act of the evening was Kicker Shaver Band and opening for Six Gun Sal was The Family of Funk.

Six Gun Sal has performed at many venues. Their past performances include:  The historic Whiskey a Go Go, The Rose, The Canyon Club, The Rainbow, the Viper Room, and many other venues. They recently returned from their performances on the East Coast across Vermont and Washington, DC where they had sold-out performances.

Six Gun Sal has had the opportunity to open for bands such as Lynch Mob, LA Guns,  Bullet Boys, Jack Russell’s, Great White, and many more.

To book the band contact Six Gun Entertainment at Anthonyappello@mail.com