Rigo Tejeda said, “Our spirited production of SISTER ACT, the Musical, will bring joy and laughter to all who come to see the show. Our divine cast will raise the roof nightly and keep toes tapping as audiences witness nightclub singer, Deloris Van Cartier’s adventurous antics in her newfound home, a nunnery.”

SISTER ACT, the Musical, tells the story of Deloris Van Cartier, a disco nightclub diva, who witnesses a murder committed by her mobster boyfriend, Curtis Jackson, after which Deloris is placed in a witness protective program in a convent under the custody of the local police department. Comedy ensues as Deloris dons a nun’s habit to go undercover as “Sister Mary Clarence,” while attempting to acclimate herself into her new lifestyle in a convent. 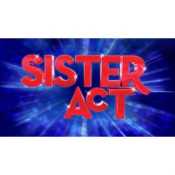 SAY THREE HAIL MARYS NOW, OR MEET ME AT THE CONFESSIONAL IN AN HOUR! DON’T MISS THE DIVINE MUSICAL COMEDY THAT’S A REAL FOOT STOMPING HOOT! SISTER ACT, THE MUSICAL, BASED ON THE BLOCKBUSTER FILM, IS COMING TO JOSEFINA LOPEZ’S CASA 0101 THEATER IN BOYLE HEIGHTS, FRIDAYS THROUGH SUNDAYS, APRIL 19 – MAY 19, 2019. JACQUELIN LORRAINE SCHOFIELD STARS AS DELORIS VAN CARTIER, THE DISCO DIVA WHO GOES INTO A NUNNERY FOR REFUGE AFTER WITNESSING HER MOBSTER BOYFRIEND KNOCK SOMEONE OFF. WITH SONGS FROM ACADEMY AWARD-WINNING COMPOSER, ALAN MENKIN, YOU’LL BE DANCING IN THE AISLES AND SINGING HALLELUJAH BY THE TIME THE CURTAIN FALLS. GET YOUR TICKETS TODAY BY CALLING CASA 0101 THEATRE’S BOX OFFICE AT 323-263-7684, OR BUY ONLINE AT WWW.CASA0101.ORG. DON’T MISS SISTER ACT, THE MUSICAL! CALL 323-263-7684 TODAY!

The musical premiered at Pasadena Playhouse in Pasadena, CA on October 24, 2006 with Dawnn Lewis originating the role of Deloris Van Cartier. Patina Miller, who was in the ensemble in the original production in Pasadena, later went on to play the role of Deloris Van Cartier in the West End production at the London Palladium which opened on June 2, 2009, and later on Broadway at the Broadway Theatre which opened on April 20, 2011.

Free Parking is available on several streets surrounding the theatre. Free Parking is also available on Fridays and Saturdays only at the Boyle Heights City Hall Parking Lot located at 2130 East First Street (at Chicago Street) by entering the lot from Chicago Street; the lot is closed on Sundays. Metro Gold Line train stations are located on First Street in Boyle Heights at both Soto Street, and at Boyle Street (Mariachi Plaza), within a short walking distance to the theater.

Rigo Tejeda (Director of the Musical and Founding Artistic Director, TNH Productions) began his career in the theatrical arts over 20 years ago. Raised and trained as a musician, his endeavors as a pianist and accompanist developed his love for music early on. Along with this came his introduction to amateur theatre and acting. His directorial debut came soon after as Music Director of his local church community. Starring in various community theatre productions, Tejeda delved into directing with his first theatrical production, Esperar, in 1994. Soon after, his self-taught skills, schooling and inclination for direction, landed several projects, including American Icon at Disneyland Resort, Un Triste Amanecer and Cats en Español. Being recognized for his passion and talent he was then asked to develop and teach workshops and classes in acting, pantomime, musical theatre and theatre 101 at TELACU the East Los Angeles Community Union, a program for inner-city students aspiring in the theatrical arts and higher education. With his strong accolades as a business owner, theatrical director and founder of a theatre company, he has become a well-recognized and respected artist in his own right. He is on the forefront of the Latino Theatre Movement in Los Angeles.

Rigo Tejeda was the director of CASA 0101’s and TNH Productions’ 2013 presentation of the Tony Awardâ-winning musical In The Heights which received great critical acclaim, including a Critics Choice in the Los Angeles Times and “Pick of the Week” in LA Weekly. Other productions he has directed at CASA 0101 Theater include: Disney’s Aladdin, Dual Language Edition/Edición de Lenguaje Dual and Disney’s Beauty and the Beast, which received a Critics Choice from the Los Angeles Times.

About The Leading Actress:

Jacquelin Lorraine Schofield (Deloris Van Cartier/Sister Mary Clarence) is an Afro-Latina actress from Brooklyn, NY, a United States Air Force Veteran and member of the Actor’s Equity Association. In 2012, she became an Ovation Award winner for her performance in The Color Purple (Celebration Theatre) and, in 2013 she was nominated for an NAACP Theater Award for Best Supporting Female for her performance as Mrs. Muller in Doubt: A Parable (Westchester Playhouse). In 2018, she appeared in The Color Purple again as one of the “Church Ladies” (under the direction of Jeffrey Polk) at Greenway Court Theatre. Other Theatre Credits: Animal Farm (Theatricum Botanicum), Disney’s Beauty and The Beast (CASA 0101 Theater/TNH Productions) and The Crucible (Theatricum Botanicum). Schofield has most recently been seen on the ID Channel’s People Magazine Investigates. She has also been seen on TV One, TruTV, Showtime, and the REELZ Network.

CASA 0101, a 501(c)(3) non-profit organization, was founded by Josefina López, author of “Real Women Have Curves,” in 2000 to fulfill her vision of bringing art and live theater programs to Boyle Heights. From its humble beginnings in a former bridal shop, CASA 0101 has established itself as a leading arts venue for Los Angeles’ East Side, currently offering year round theatrical productions and classes in dramatic writing and acting for youth and adults. CASA 0101 is dedicated to providing vital arts, cultural, and educations programs in theatre, digital filmmaking, art and dance – to Boyle Heights, thereby nurturing the future storytellers of Los Angeles. CASA 0101 is named such, as casa means house or home in Spanish. 0’s and 1’s are the binary language computers use to operate. CASA 0101 was founded at the dawn of the digital age, when digital cameras started appearing and moviemaking became accessible to more people. Early on Josefina López taught a few digital video classes. Though the organization subsequently focused its energies on theatre and not digital filmmaking, the name stuck. 0 and 1 can also mean nothing and everything, yin and yang, male and female, and many more dual opposites. Through storytelling and theatre and other art forms, CASA 0101 is committed to exploring the world and oneself, the good and the bad, the light and the darkness of our world to the point where there are no borders and “0” and “1” are one.

The mission of TNH Productions (Teatro Nuevos Horizontes) is to produce musical live theater that is inspirational, embraces diversity, excellence, integrity and enthusiasm. The company strives to hire individuals onstage and backstage that reflect the diversity of our country. The company’s production of In the Heights in 2012 and 2013 enjoyed many sold out performances and excellent reviews in La Opiníon, named “Pick of the Week” by LA Weekly, “Critic’s Choice” in the Los Angeles Times and was featured on ABC’s American Latino TV. In The Heights is composer-lyricist Lin-Manuel Miranda’s first show. His latest Broadway show, Hamilton, received 11 Tony AwardsÒ. In 2017, TNH Productions had two successful runs of Disney’s Aladdin Dual Language Edition, with most of the 67 performances sold out at CASA 0101 Theater and the Los Angeles Theater Center. Brooklyn & Boyle (September 2017) in its’ review, “Bilingual Aladdin Electrifies DTLA” described the production as “…electrifying reprisal of a show…uniquely visionary take on Disney’s Aladdin Dual Language Edition to deafening applause, unabashed laughter and screams of delight from children and grown-ups alike.”