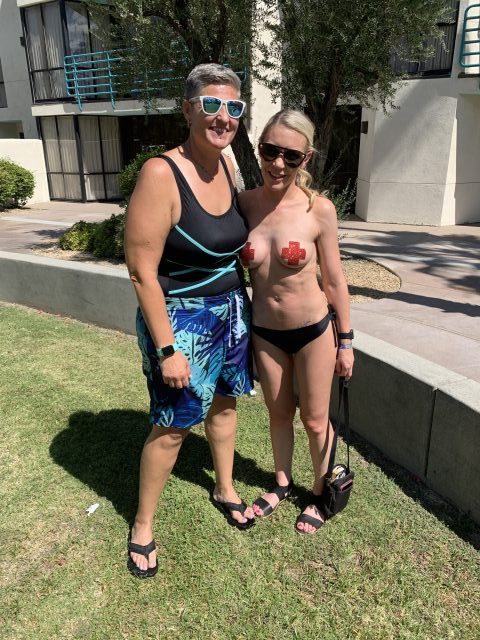 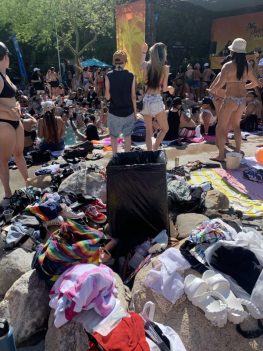 Palm Springs, CA (The Hollywood Times) 9/26/22 – Two people were having public sex outside their patio at the 31st Dinah when I was relaxing outside at 1:15 Sunday morning. After a full day of the hot sun I don’t how they had the energy. Go for it, I thought to myself envying their ability to keep the party going.

Sins and debauchery were everywhere at the Dinah. So many encounters, so little time to paraphrase a disco song of the eighties, was what I felt as we left Dinah. 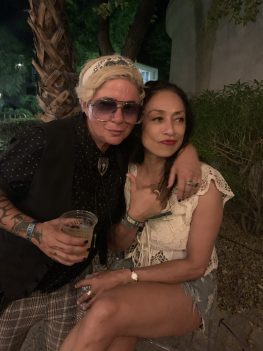 There was the Hollywood Bubbler shooting bubbles at me, rather than bullets. DJ China who played not only old school such as Earth Wind and Fire, but hard rock giving the crowd everything we wanted. The femme beauty clad in a rainbow colored bikini with abs like Hercules. The power butch femme couple. The butch was a locomotive engineer and the femme wearing Red Cross symbols for pasties, a nurse. They kindly posed with me in a photo near the tacky Budweiser flags. The Brazilian Cowboy who bragged they were a sex machine able to last at least two hours. The love of their life sitting next to them, a Latina femme, called the Cowboy a liar as they were talking. A Croatian model whose smile would make anyone melt. The beautiful African American couple representing Olivia challenging the stereotype that only white women pay money to ride on a big cruise ship. The military veteran treating herself to a vip pass because in her words: “I deserve it”. But not everyone was so welcoming at the Dinah. As I passed people in their cabanas some shot stares that could kill. Maybe they were upset they were sharing their mist spray begrudgingly with me after they paid an additional fee for the cabana. But the Hollywood Bubbler is who I’ll be left thinking about. Remember when life can be a drag, don’t let anyone take your bubbles away.