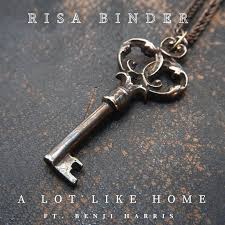 The digital release of Binder’s “A Lot Like Home,” available on iTunes, Amazon and all digital retailers (HERE), was written by Binder, Harris, Isabeau Miller and Shaun Balin, and was inspired by “exciting firsts” in their lives – moving to a new location, expecting a first child and embarking on new horizons.  The song’s chorus lyrics are: “Something sweet that we can call our own, yeah we made it down the winding road, and it feels a lot like home.”

Says Binder, “I absolutely loved shooting this video with director Doltyn Snedden! He always sees my vision so clearly and brings it to life!  Benji and I have worked together for six years and having him write this and sing it with me felt like having family on set. Benji’s voice is so beautiful — it’s always a great time getting to perform with him, and him wife Andrea is the actress playing the newlywed in the video! It was truly a family friendly video shoot!”

The Hollywood Times had the opportunity to speak with Risa about her new video for her single release of “A Lot Like Home.”

Grab you earphone, your favorite beverage and enjoy the conversation:

“Risa’s new video is so inspirational for all those dreaming of owning their first home. The lyrics will help lift you up in you happen to be on the fence about purchasing your first home, especially after the year or so we have been experiencing. Don’t miss this incredible new video and share it with your family and friends.”  Judy Shields, The Hollywood Times

Singer/songwriter Risa Binder’s debut EP, NASHVILLE, was produced by Luke Wooten, and featured a collection of songwriters that included Chuck Jones, Matraca Berg, Phil Barton, and  more.  Her single from NASHVILLE, “Gotta Have You,” debuted at #26 on the  iTunes Country Releases chart. She has opened for legends James Taylor and Ronnie Milsap, and her song, “Just Like That,” was prominently featured on  “General Hospital,” earning her an Emmy nomination for “Best Song in a Daytime Drama.” Binder’s single, “You Came Along,” was added Radio Disney, with radio airplay nationwide hitting the Top 40 on Music Row; and her song, “You Haul,” caught the attention of iHeartRadio, in which they chose her to be featured in iHeartRadio/AT&T’s “About to Break” series for their special campaign.

Benji Harris is a well-known Nashville veteran. In addition to releasing his debut solo album in 2017, Benji has lent his talents playing guitar for number one artists like Sam Hunt, Carly Pearce, Cassadee Pope, Lindsay El and Jordan Davis.  His original trio, Scarletta, has had a Top 30 hit on Country Radio, and a popular music video in high-rotation on CMT. He has played for country music stars on arena tours across the country, and has performed with SongDivision for numerous Fortune 500 clients, having a vast knowledge when it comes to communicating clients’ core values and purpose using music.