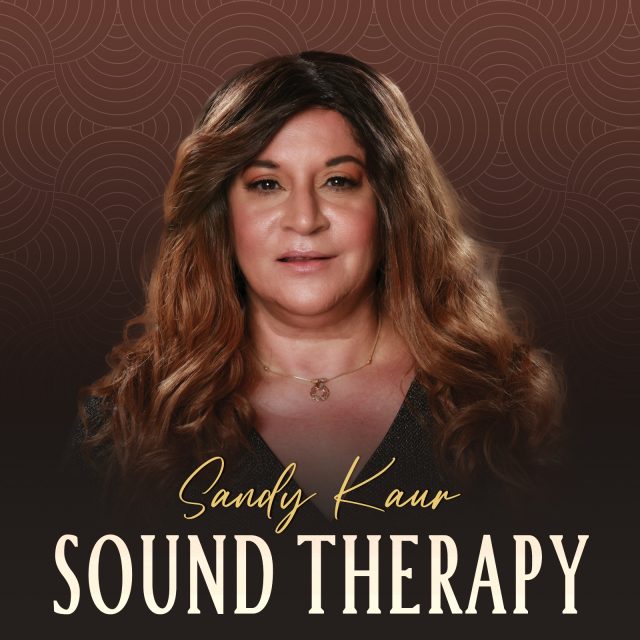 Jimmy Steinfeldt: Tell us about your current albums.

Sandy Kaur: I was fortunate enough to release two music albums in year 2021. The first album is called Divine Bliss – Sandy Kaur with Guru Ganesha, which I released on January 20,2021. The music is based on hope and healing. We created the songs in response to the pandemic in year 2020. I was very moved by the human suffering across the world. I wanted to provide my audience and listeners with music that would make them feel relaxed and calm with uplifting listening experience as well as promote sense of well-being.

The second album is called Sound Therapy, which I released on November 28,2021 during thanksgiving as I am grateful for my health, support from my listeners and peace.

You can find more information on both the albums in the press releases below:

JS: Where did you record it?

SK: In Los Angeles with my producer Thomas Barquee. Guru Ganesha is the other singer, songwriter who is part of our team and worked with us on both albums.

JS: Tell me about the song writing process.

SK: I started on the album in 2018 when I was not acting. I was diagnosed with breast cancer in 2016 and was going through my recovery process after the treatments. But I was very peaceful, calm and re-evaluating my life. I also volunteered at the Ventura county hospital during that time to stay active. I wanted a more spiritual practice in my life. I wrote my first album “Spiritual Healing’ with Tim Abbott in Sunnyvale, California while my husband was building the Stanford Hospital in 2017-18. I worked on my next album “Divine Bliss” in the year 2020 during the pandemic in Los Angeles. The title song Divine Bliss is also called Wahe Guru, which means one god, one almighty. I then wrote three other songs with Thomas Barquee and Guru Ganesha. It was an excellent team effort.

This was a fun process and I thought I’d like to continue songwriting as I feel I am touching a lot of people and helping them. People told me it’s helping them while they are doing meditation, yoga, and even while driving, it’s keeping them calm. The music is helping them feel centered and grounded. So this year we worked on my third album “Sound Therapy”. We recently  released this album during thanksgiving 2021.

JS: You mentioned you got food for thought from you father. Can you elaborate?

SK: My mother and I went through the breast cancer journey together. We both had it at the same time. This really moved my father to be more creative and be at one with god. He said to me “You know all we have is the almighty, all we have is god. You should write your songs based on that theme. That’s our hope, our healing, our blessing and our focus and what we should meditate on.” He gave me a lot of motivation with lectures and talks about spirituality in the Sikh tradition and how to create Sikh music.

JS: Are the songs in the Sikh language or in English or both?

SK: The Sikh language is called Gurmukhi. It’s from the 14th Century from the first Guru. We did a few lines in Gurmukhi and then a few lines in English to translate. It’s a World music, a fusion music combining English and Gurmukhi (Indian punjabi) music.

JS: When did you discover you had the musical gene? When did this all begin with singing and playing musical instruments?

SK: I started at age five singing duck songs in kindergarten. Then into musical theater in grade school growing up with The Sound of Music, and Charlie Brown. By age thirteen, I discovered I enjoyed singing. In 1999, I met my husband Ravi. He said “You are very artistic. You speak several languages and you dance, act, sing, model and play instruments. You should use your talents and become a professional artist.” In 2005, I worked on a small tv film called Mind over murder in Ottawa,Canada. Tori Spelling was the lead in that production. In 2007, life brought us to Los Angeles. I studied the Meisner technique from Playhouse West with Robert Carnegie. My husband, family and friends have also been very supportive and encouraging.

JS: Tell me about the recording process for the album.

SK: As all the work was done during the Pandemic in 2020, I would sit at home with my harmonium, the Indian keyboard. I would come up with a tune, a raw piece of music and send the recording to Thomas Barquee, and Guru Ganesha. They would come back to me with suggestions. We go back and forth and then go into the studio. In the studio everything would change even more. Thomas is a genius in this genre of music. Thomas would suggest I take it up a notch, or down a notch or do my own background vocals. It all clicked and we came up with this amazing music.

JS: Do you write mostly on the harmonium?

SK: Yes, and a little on guitar. Also my team sends me voice and instrumental demos.

JS: What singers and musicians have influenced you?

KS: From the Sikh genre Snatam Kaur, Jagjit Kaur, Nirinjan Kaur. I loved Michael Jackson since I was a kid. He was a genius. I was very influenced by Prince, Whitney Houston, and Lionel Richie-one of my favorites, Tina Turner is a fabulous performer. I was also very influenced by my parents. They would perform every weekend in the sikh temple, the Gurdwara.

JS: Is there anyone you would like to perform with or collaborate with?

JS: What advice would you have a for a young person who wants to have a music career?

SK: Don’t take no for an answer. Whether acting or singing or anything in the arts. Keep trying, stay motivated. Stay true to your craft. Stay in the practice of it. The doing of it. If you sit back and say it’s going to happen it’s not going to happen. You have to make it happen. Also, you have to believe in yourself.

JS: Is there a cause you support our readers should know about?

SK: The American Cancer Society and the Susan G. Komen Breast Cancer Foundation.  My mother and I are both cancer survivors.

SK: I am waiting to hear back from Grammy for my membership. We won the 2021 Best of Los Angeles Award for best Spiritual music. I hope that this new album will hit a higher level. It will influence more people and be heard all across the world.