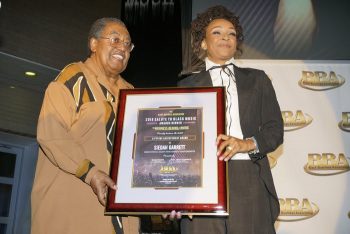 The event was held in recognition of African American Music Appreciation Month, this years’ theme is “The Business Behind the Music.” Also, honored for their achievements in Black Music included: Valerie Ervin; President of the Ray Charles Foundation, John Acosta President of the American Federation of Musicians Local 47 and The Honorable Dr.; Mike Davis, President Pro Tem of the City of Los Angeles Board of Public Works Commissioners.

Ellis Hall, “The Ambassador of Soul” performed at the standing-room only event, along with the young vocal sensation, Zipporah Robinson. Hall is known for singing, songwriting and as a musician playing every instrument with a strong 5 octave vocal range and was the lead vocalist and keyboardist for the soul-funk band Tower of Power. He performs with elite symphony orchestras worldwide including: His first being the Hollywood Bowl under the direction of his mentor Ray Charles.

African-American Music Appreciation Month is a commemoration that takes place annually in the United States, throughout the month of June. Originally proclaimed “Black Music Month” by President Jimmy Carter on June 7, 1979, U.S. presidents have issued proclamations for the celebration under that name until President Barack Obama announced the observance under a new title, African-American Music Appreciation Month.

Since 1970, the Black Business Association (BBA), a 501(c)(3) nonprofit organization, headquartered in Los Angeles, has been instrumental in the growth and development of thousands of African American businesses, providing innovative information and service programs to our constituents, advocate for change and adherence to laws and programs, and assisted companies and individuals to move up the ladder of success.