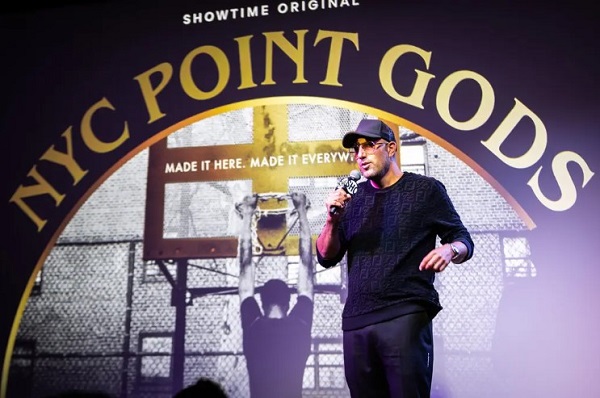 NYC POINT GODS Will Be Available Across the Network’s Streaming and On Demand Platforms for All SHOWTIME Subscribers this Friday, July 29 And Will Premiere on Air at 9 p.m. ET/PT

NEW YORK – July 28, 2022 – SHOWTIME Sports Documentary Films has released a sneak peek for the documentary NYC POINT GODS, an in-depth look at the legendary point guards of New York City who honed their craft and developed their renowned showmanship on the city’s iconic playgrounds and high school gyms in the 1980s and ‘90s. NYC POINT GODS will be available across the network’s streaming and on demand platforms for all SHOWTIME subscribers this Friday, July 29 and will premiere on air that night at 9 p.m. ET/PT.

To watch and share the clip, go to: https://s.sho.com/3PYFvBk.

The teaser clip breaks down the No. 1 characteristic of an NYC point guard: handles.

As Nate “Tiny” Archibald told a young God Shammgod, “If you master how to dribble, you will always be worth something to a team.”

Ballers in New York learn from an early age that how you handle the rock is the most important thing. Ballhandling is a New York City point guard’s attitude and self-expression, becoming second nature. They grow up on that fundamental skill. It’s something you can practice in the gym, in crowded streets, in the grocery store, even without a ball in your hands.

“A New York City point guard will give up his girl and his chain before he give up his dribble,” says Lincoln High School alum and former NBA All-Star point guard Stephon Marbury.

“You know the old saying. If you had to choose between your girl and the rock, who you gonna take? Well, I won’t have a date tonight,” says Lefrak City, Queens native and NBA champion Kenny Smith in the clip.

NYC POINT GODS is a collaboration with Kevin Durant and entrepreneur Rich Kleiman’s Boardroom (BASKETBALL COUNTY: In The Water), is executive produced by Coodie and Chike (jeen-yuhs) and directed by Sam Eliad. NYC POINT GODS is the latest addition to SHOWTIME SPORTS® unparalleled lineup of premium basketball content. Additional titles include KOBE BRYANT’S MUSE, QUIET STORM: THE RON ARTEST STORY and SHUT UP AND DRIBBLE.

Showtime Networks Inc. (SNI), a wholly owned subsidiary of Paramount, owns and operates the premium service SHOWTIME®, which features critically acclaimed original series, provocative documentaries, box-office hit films, comedy and music specials and hard-hitting sports. SHOWTIME is available as a stand-alone streaming service across all major streaming devices and Showtime.com, as well as via cable, DBS, telco and streaming video providers. SNI also operates the premium services THE MOVIE CHANNEL™ and FLIX®, as well as on demand versions of all three brands. SNI markets and distributes sports and entertainment events for exhibition to subscribers on a pay-per-view basis through SHOWTIME PPV®. For more information, go to www.SHO.com.