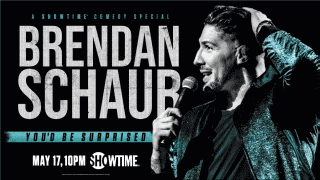 Podcast Host And Comedian In Debut Comedy Special; Premieres Friday, May 17 At 10 p.m. ET/PT On SHOWTIME

A multi-platform entertainer, Schaub first became popular as an MMA fighter and has since developed a significant fan base with his work in comedy and podcasting. Schaub continues to co-host the long-time podcast “The Fighter and The Kid” with Bryan Callen, which averages over nine million downloads per month.  He co-created and co-hosts the new podcast “The King and The Sting” with Theo Von and is a frequent guest on The Joe Rogan Experience.

Schaub joined SHOWTIME in 2018 and launched the podcast and digital talk show BELOW THE BELT WITH BRENDAN SCHAUB, which has quickly developed into a multi-platform franchise covering the fight game and pop culture through a range of unique and authentic content created for his persona.

Parlaying his hosting talent from podcasts to television, Schaub recently co-hosted the Bravo series “Play by Play” with Jerry O’Connell and was named a correspondent on After Party for the E! Network, and co-hosted last year’s Golden Globes® and Grammy Awards® after-shows. Additionally, Schaub performs sold-out live comedy shows across North America, Australia, London and Dublin, including regular solo stand-up sets at the world-famous Comedy Store, Hollywood Improv and The Laugh Factory.

BRENDAN SCHAUB YOU’D BE SURPRISED is produced by Malka Media and directed by Emmy-Award winning Director of Photography Jay Lafayette, who has worked with comedy icons Steve Martin and Martin Short, with Amy Schumer, Marlon Wayans, Jim Jefferies and many more.