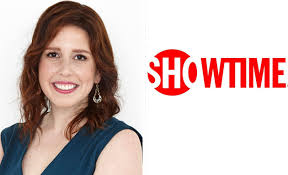 Project Co-Created by Jeremy Beiler, With Jessi Klein To Serve As Showrunner, Michael Showalter To Direct

Produced by SHOWTIME, BIG DEAL is a grounded comedy in which Bayer plays a character, inspired by her own past, who overcame childhood leukemia to achieve her lifelong dream of landing a job as a QVC host.

“Vanessa Bayer is such a sharp and joyful comic talent, and in BIG DEAL she mines the story of her own life to deliver hard comedy with deep resonance,” said Levine. “In Jeremy, Jessi and Michael, we have a veritable All-Star team who never fail to deliver smart, subversive and funny comedy – which BIG DEAL certainly promises to be.”

Nominated for an Emmy and an American Comedy Award during her seven seasons on Saturday Night Live, Bayer has also appeared in such film and television projects as Trainwreck, Ibiza, Office Christmas Party, Will & Grace, Drunk History, Portlandia, Sound Advice and Man Seeking Woman.

Beiler has earned three Emmy nominations and two Writers Guild of America awards for his work on Inside Amy Schumer and Saturday Night Live. His recent credits include I Think You Should Leave with Tim Robinson.

A multiple Emmy nominee, Klein served as head writer and executive producer of Inside Amy Schumer, which won the Emmy for Outstanding Variety Sketch Series and a Peabody Award. She also served as consulting producer and writer on BLACK MONDAY. Her writing and producing credits also include Dead to Me, Transparent, Kroll Show and Saturday Night Live, and she is also one of the lead voices on Big Mouth. Klein’s debut book, You’ll Grow Out of It, was released in 2016 and became a New York Times bestseller.

In addition to directing the critically acclaimed The Big Sick, Showalter’s extensive resume of writing and directing includes Hello My Name Is Doris, Wet Hot American Summer and its sequels, Search Party, Childrens Hospital, Super Fun Night, The State and the upcoming The Eyes of Tammy Faye.

BIG DEAL is executive produced by Vanessa Bayer, Jeremy Beiler, Michael Showalter and Jessi Klein, along with Megan Ellison and Sue Naegle of Annapurna and Jordana Mollick of Semi-Formal.