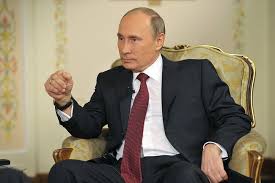 NEW YORK – May 1, 2017 – Showtime Documentary Films will release THE PUTIN INTERVIEWS, a revealing series of interviews between renowned filmmaker Oliver Stone and Vladimir Putin, the Russian president who has reemerged as the central antagonist and wild card to the United States on the world stage. THE PUTIN INTERVIEWS will have its world television premiere on SHOWTIME over four consecutive nights starting on Monday, June 12 at 9 p.m. ET/PT. For a first look, go to: https://youtu.be/BrBoj760aD8.

Granted unprecedented access to both Putin’s professional and personal worlds, Oscar®-winning writer and director Oliver Stone (Platoon, Snowden), with the help of his longtime documentary producer Fernando Sulichin, interviewed the Russian leader more than a dozen times over the course of two years, most recently in February following the U.S. presidential elections. Since first becoming the president of Russia in 2000, Putin has never before spoken at such length or in such detail to a Western interviewer, leaving no topic off limits. In scope and depth, THE PUTIN INTERVIEWS recalls The Nixon Interviews, the series of conversations between David Frost and Richard Nixon that aired in the spring of 1977, 40 years ago.

“If Vladimir Putin is indeed the great enemy of the United States, then at least we should try to understand him,” Stone said.

During these wide-ranging interviews, Putin confronts the controversies engulfing the increasingly fragile relations between the U.S. and Russia today, including his views on President Donald Trump and allegations of Russian meddling in the 2016 U.S. presidential election, NATO, and fostering turmoil in Syria, Ukraine and elsewhere.

Prodded by Stone, Putin traverses a host of critical topics in sharp detail, including Putin’s rise to the Presidency, and long-term grip on power, his personal relationships with Clinton, Bush, Obama and Trump – as well as Yeltsin and Gorbachev. He also talks of the legacies of Stalin and Reagan, as well as the surveillance state and Edward Snowden’s flight to asylum in Moscow, and the resignation of U.S. Rep. Debbie Wasserman Schultz.

Providing intimate insight via sessions held throughout the Kremlin, Sochi and Putin’s official residence outside of Moscow, the four-hour film captures the essence and complexity of the Russian leader and his approach to the U.S. and the world, while incorporating dramatic footage of key events. The exchanges are often pointed, always thought-provoking and occasionally surreal – including a remarkable sequence where Stone introduces Putin for the first time to Stanley Kubrick’s Cold War satire Dr. Strangelove which they watched together  – all serving to illuminate the mindset of one of the least understood but most important players in the geopolitical world today.

In his highly personal interviews for his documentaries Comandante, Looking for Fidel, Persona Non Grata and South of the Border, Oliver Stone previously parried with Fidel Castro, Hugo Chavez and Benjamin Netanyahu, among others. Stone has received three Academy Awards® – Best Director for Platoon and Born on the Fourth of July and Best Adapted Screenplay for Midnight Express, along with four other Oscar nominations and three Golden Globes®. He was also the winner of an Emmy® for the television movie, Indictment: The McMartin Trial. Other noteworthy films by Stone include W. and Salvador. This marks Stone’s return to SHOWTIME, five years afterTHE UNTOLD HISTORY OF THE UNITED STATES, which had the biggest premiere telecast ever for a SHOWTIME docu-series, and still ranks as one of the network’s top docu-series ever.

THE PUTIN INTERVIEWS is produced by Fernando Sulichin, New Element Media and Rob Wilson. Sulichin previous credits include The Untold History of the United States, South of the Border, Comandante, Snowden, Savages and Malcolm X.

The project joins an esteemed list of documentaries under the Showtime Documentary Films banner, many of which focus on the lives and legacies of culture-defining figures, including the Emmy-nominated film LISTEN TO ME MARLON, WEINER and ZERO DAYS. Other upcoming Showtime Documentary Films include RISK, the latest documentary from Oscar winner Laura Poitras (CITIZENFOUR), giving viewers an inside look at WikiLeaks, Julian Assange and those who surround him; WHITNEY. “CAN I BE ME”, exploring the incredible career and complicated life of Whitney Houston; ERIC CLAPTION: A LIFE IN 12 BARS, and a feature-length documentary about the extraordinary life and times of comic legend John Belushi.

Showtime Networks Inc. (SNI), a wholly-owned subsidiary of CBS Corporation, owns and operates the premium television networks SHOWTIME®, THE MOVIE CHANNEL™ and FLIX®, and also offers SHOWTIME ON DEMAND®, THE MOVIE CHANNEL™ ON DEMAND and FLIX ON DEMAND®, and the network’s authentication service SHOWTIME ANYTIME®. Showtime Digital Inc., a wholly-owned subsidiary of SNI, operates the stand-alone streaming service SHOWTIME®. SHOWTIME is currently available to subscribers via cable, DBS and telco providers, and as a stand-alone streaming service through Apple®, Roku®, Amazon, Google and Samsung. Consumers can also subscribe to SHOWTIME via Hulu, YouTube TV, Sling TV, Sony PlayStation® Vue and Amazon Channels. SNI also manages Smithsonian Networks™, a joint venture between SNI and the Smithsonian Institution, which offers Smithsonian Channel™, and offers Smithsonian Earth™ through SN Digital LLC. SNI markets and distributes sports and entertainment events for exhibition to subscribers on a pay-per-view basis through SHOWTIME PPV®. For more information, go to www.SHO.com.