The Short+Sweet Hollywood Festival of short plays, films and dance concluded this year’s Festival competition at the Marilyn Monroe Theatre in West Hollywood. 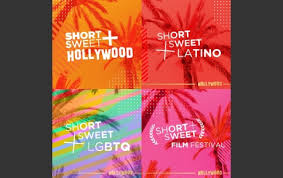 It was the fourth annual Festival in Hollywood. The Short+Sweet Festival takes place in 30 cities in 19 countries around the world. It was created in Sydney in 2002 by Founding Executive Director Mark Cleary. The Hollywood Festival Director is Nick Hardcastle.

Winning entries in the Festival won awards ranging from cash prizes to goods and services from Festival sponsors including Argentum Studios, Final Draft, Casting Networks, Modo Yoga LA, LA Connect, We Audition, to a meeting with a talent executive at NBC Universal.

Winners were determined by polls of judges from the Industry in addition to audience favorites.

In The Bag (Excerpts), choreographed by Beth Megill and performed by Megill, Kevin Holland, Brooklynn Reeves-Mailer and Karissa Smith;

It’s a Solo but I Am Not Alone, choreographed and performed by Vannia Ibarguen;

Kathak, choreographed by Rina Mehta and performed by Ayaana Kanan.

A special Festival Director’s Award for an Emerging Artist was given to Tyler Wladis, an exceptionally talented juvenile actor who delighted audiences in the short play Palm Spring Break.

Winning short plays in the Open English Language category included The Forgotten Place, which won awards for its playwright Jeff Locker and for actor Brian Flaccus; True to You, winning for actor Gia Carides; and For Jeffrey, winning for director Jason Weiss.

Winning entries in the Latino division of the Festival included, for best productions, Martha Me Tienes Harta and Carlotta Learns to Whistle. Luz Estrada won for her script for Somos Mamiferos. Eduardo Ivan Munoz won as director of Martha Me Tienes Harta and Magaly Castellanos won for best female actor for her performance in the play. Alejandro Patino won for his performance in Carlotta Learns to Whistle.. Elysa Gomez won ‘People’s Choice’ for solo piece Are You Real? (Be a Mexican).

Short+Sweet Hollywood hosted its most diverse array of programming ever in 2019, and looks forward to advancing its achievements in the years to come.