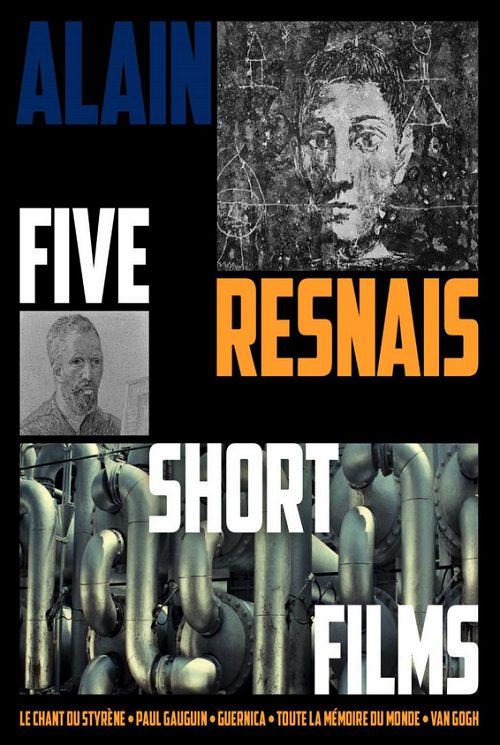 Currently screening at several Laemmle Theatres in greater Los Angeles is a set of five newly restored early short film masterpieces from the legendary French filmmaker Alain Resnais (1922-2014). They have been restored by Icarus Films and are definitely worth seeing to get a better understanding of the style and keenly developed eye that Resnais would bring to bear into his feature films, including the Oscar-nominated Hiroshima Mon Amour.

French documentary style differs from that of British and American documentaries in that it tends to be more poetic and literary. Alain Resnais started out with matching portraits of two famous painters, Van Gogh (1948) and Paul Gaugin (1949) and then did a short film about Guernica (1951), about the town of Guernica bombed during the Spanish Civil War and the subject of Picasso’s most famous painting, “Guernica.”

The two more interesting films that point the way to Resnais’ more experimental features  Hiroshima Mon Amour (1959) and Last Year at Marienbad (1961) are All the World’s Memory: Toute La Mémoire Du Monde (1956) and The Song of Styrene: Le Chant Du Styrène (1957). To his credit, New Wave director Jean-Luc Godard commented in Cahiers du Cinéma in February 1959: “If short films didn’t exist, Alain Resnais would have surely invented them.” In 1953, Alain Resnais teamed up with fellow French filmmaker Chris Marker on Statues Also Die (Les statues meurent aussi), a film essay about African decolonization using African art in the France’s anthropological museum, Le Musée de L’Homme, but not considered appropriate for the Louvre. This film was considered to be highly critical of French overseas policies and was banned in France. Les statues meurent aussi recently screened at the Motion Picture Academy Museum in Los Angeles a part of a retrospective of the work of Chris Marker, who was also born in 1922, the same year as Resnais.

Of the five films, the two with the greatest name recognition are the least noteworthy – matching portraits of famed frenemy painters,1948’s Van Gogh and 1949’s Paul Gauguin.  Both are entirely composed of the artists’ works, with dramatic voice overs.  With the great paintings reduced to black and white, it must be said that much of what makes them compelling is not present. That said, Resnais’ Van Gogh is still more engaging than the painstaking animated feature-length misfire, Loving Vincent (2017).

Resnais carefully uses both dissolves and straight cuts in his lulling montaging of the artists’ paintings, focusing on the fusions of line, shape, texture of paint on canvas, and brushstrokes. If Gauguin registers more on a human level (the eyes, the thoughts, the figures, their surroundings), Van Gogh’s work tends to land here in more varied and fevered ways; a grander lucidity peeking out to varying degrees. The pair were just alike enough to ultimately bristle one another away for good, their mutually assured poverty ultimately running both lives and careers into deathly infernal tailspins. Resnais gets all of this.  In his respective eighteen and thirteen-minute narratively fluid profiles, we are both coaxed into their worlds and educated.

Van Gogh netted Resnais and producer Pierre Braunberger the 1950 Oscar for Best Short Subject. The path to that success paved the way for the more challenging Guernica (1951, 14 minutes), which he co-directed with Robert Hessens, is a similar presentation with the work of Picasso.  Guernica is about the horrifying 1937 bombing of the town of Guernica during the Spanish Civil War, featuring Picasso’s paintings, drawings, and sculptures. Guernica is both a farther-reaching piece insofar as it deals with the human cost of the 1937 bombing of the titular Spanish town, but is also abstract and cerebral. On April 26 1937 the small Basque town of Guernica was bombed without warning by the German aviation. Two thousand people, all civilians, got killed. Like millions all over the world, Pablo Picasso was shocked and he translated his emotion into a magnificent but terrifying picture bearing the name of the martyred city. This film does not only comment on the painting, it also gives it a new life through frantic camera and sound effects.

The longest of these five films is Resnais’ follow-up to Night and Fog (1956), All the World’s Memory: Toute La Mémoire Du Monde (1956, 21 minutes), which is a profile of the sprawling Parisian institution – the Bibliothèque nationale de France.  Resnais takes a wonderfully whimsical approach to exploring this vast repository of humankind’s accumulated published works.  The camerawork, often defying gravity like some sort of rudimentary drone, is a flying compliment to the above-and-beyond nature of the Bibliothèque itself.  Toute La Mémoire Du Monde is anything but stodgy, and a fitting early dwelling on the process and nature of human memory- a major Resnais theme if ever there was one.

Lastly, The Song of Styrene: Le Chant Du Styrène (1957, 14 minutes). This odd, full color film exists thanks to a commission from the French aluminum conglomerate, Pechiney. The only film of these five to break out of black and white while also going widescreen, The Song of Styrene presents unlikely art house looks at the manufacturing process of plastic. It is the perfect example of how to turn a commissioned industrial film into a lyrical, satirical film masterpiece. The Song of Styrene is gorgeous. The elements, covered in inhuman closeups, appear like some sort of alien plant life. Witty renowned French poet and author Raymond Queneau provides the film’s narration in rhyming couplets. Resnais cast a wide net for himself; why not cast it early with that one work: plastics?

Considering our 2022 viewpoint on the plastics industry – omnipresent and as something that, combined with our carelessness, has become a scourge of the environment – it’s hard to remember a time in the post-war period when it was busy revolutionizing the domestic landscape. Alain Resnais’ short documentary, although by no means a fully ringing endorsement, captures something of the thrill and excitement of the time. Originally, commissioned by someone at plastics company Pechiney, who must have been fairly surprised by the avant garde result, the film starts with our objects of desire – most notably a red bowl – before taking us on a journey back through the processes that made it. With its Saul Bass-style credits, the documentary begins on a note as bright and upbeat as the plastics it shows. Colourful fronds grow like science-fiction plants and a variety of household objects are presented in still life in a way that recalls the likes of Mondrian, as we begin to see the industrial process that shapes the plastic.

Accompanying the vibrant imagery is narration in verse, scripted by French poet Raymond Queneau and read by Pierre Dux. It was written after the film was completed, allowing Queneau to match the rhythm of the images perfectly with his sometimes illuminating, often questioning consideration of plastic. The dramatic element is further enhanced by Pierre Barbaud’s uplifting score (conducted by the equally talented George Delerue, who would go on to compose music for a huge number of films including Women in Love to Platoon). As the film reaches its climax, we travel away from the shiny pipework, interesting facts and mould-makers as Resnais examines the more brutal exterior of the factory and the voice-over considers metamorphoses not fully understood. This philosophical note lends the film an additional air of mystery that, like the plastics, can be moulded in a variety of ways, depending on your viewpoint.

The five shorts have been released by Icarus Films as a blu-ray as well. They can be seen as effective bridges to where both Resnais and Braunberger would be headed, and their past work. Resnais’ own career in making short films can be traced back as far as 1936.  Many of those very early shorts are profiles of contemporary fine artists – an obvious stair-step to Van Gogh and Paul Gauguin. As for Braunberger, the short fold-out insert included with the Blu-ray is primarily a transcribed interview with the late producer’s daughter, Laurence Braunberger, covering his subsequent career as well as his collaborations with Resnais. Also covered are the restoration of these films, all of which look exceptional on this disc.