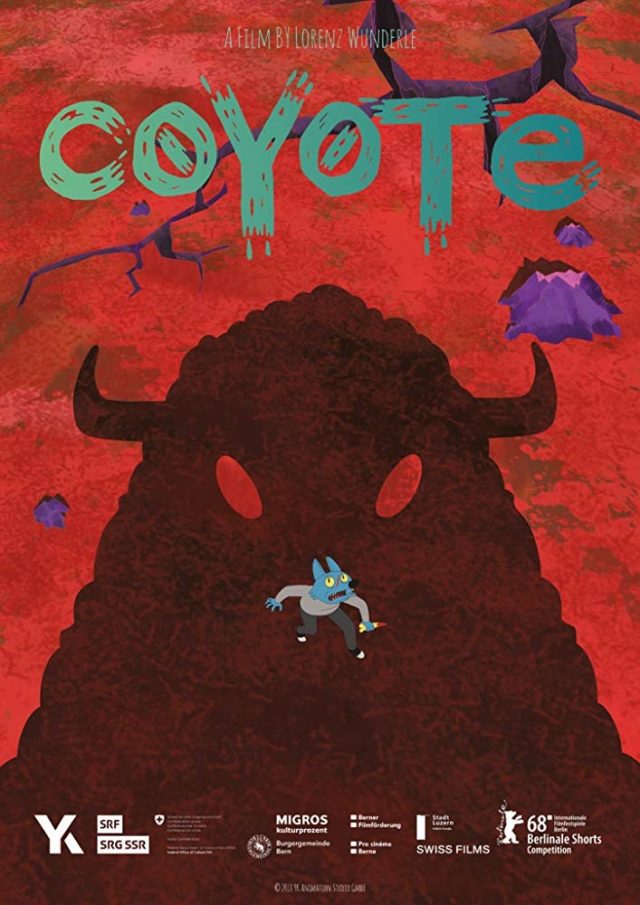 He can’t stand the emotional strain any longer, the evil takes more and more possession of him until the coyote viciously attacks the wolves in a violent rage.

The demon gets what he wants, and the coyote returns to his world. In thoughts with his family, the coyote strides alone through the desert and will, from now on, carry a shadow of the demon with him at nighttime.

This was a very interesting film to say the least, but I can understand what the Coyote went through. This is a standard story of the death of the protagonist (not literally) and their rebirth. Like with Superman, Batman, or any other superhero, the Coyote here is “may be” a hero to some but more than likely, he’s taken into another reality where he faces his enemy, the wolves, for a chance to right the wrong he experienced. He descends into what appears to be “hell”, taken in by the buffalo that was killed and what the Coyote and his family were feasting on when three wolves entered the picture.

The film takes the coyote into the hell of humanity transforming him into human form, but still a coyote, walking on two legs upright. From that point, we see him sulking and looking at picture of him and his three kids and wife (as coyotes). Then, all hell breaks loose. Those same three wolves that murdered his family appear. He is haunted by the memory of that day as the buffalo appears, who gives him a choice; to choose between the very same buffalo that was food or the Coyote and his family. They appear again, chasing him and beat him leaving him in the middle of the road. Then the demon appears once more with another chance to make a choice.

I will not go into the rest of the story, but you can pretty much sense where this goes. It’s not for the faint of heart and it’s quite gory, for an animated film but Lorenz did that for a reason. Even the look of the bar, the bathroom and graffiti throughout gives you the picture of the world the Coyote descended into to right the wrong of the murder of his family.

If you want a true sense of this film, consider the Charles Bronson movies and think about what they were about and how he resolved everything. Even the Dirty Harry movies. They’re all the same. But what Lorenz did here was just have the pictures and music with no dialogue. Again, brilliantly done to convey the story to the viewer without dialogue taking away from the message in the film.

Even though the film has its share of gore like any horror movie, this was done, in my opinion, to get the point of the film across. The horror we feel when something tragic happens to us or our family or even a friend. We want justice and we want to feel hero-like when we get justice but that’s not always true or necessary. Not like this. This Coyote was badly hurt, beaten and more but he made the one mistake that we all make: Selling our souls to the devil just because we need to feel more powerful than those that have done us wrong.

This is a chance for us to rethink that strategy and understand the consequences of our actions. We can be the hero for those that have been hurt but we can be their voice. Use your power and your voice for good and choose, wisely!