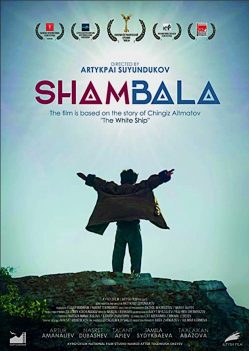 Los Angeles, CA (The Hollywood Times) 11/4/21 – On Wednesday November 3 at the Landmark Theatres in West Los Angeles was the U.S. premiere of Shambala (2021), a film from Kyrgyzstan by director Artykpai Suiundukov. Based on the novella The White Ship, by Kyrgyz writer Chingiz Aitmatov, Shambala tells the story of a lonely, impressionable, seven-year-old boy who lives in a protected forest, high in the mountains, with his grandfather, step-grandmother, auntie and uncle. He spends his time exploring and listening to legends from his grandfather, in particular tales about the sacred Mother Deer. The world of myths and folklore eventually conflicts with the harsh reality of the world of adults, who are faced with their own personal problems and dilemmas. Shambala has been selected as Kyrgyzstan’s submission for the Best International Feature Film for the 2022 Oscars. The screening, which is part of the 2021 Asian World Film Festival in Los Angeles, was well attended and especially prominent were people from the local Kirghiz community in Los Angeles. Kadyr M. Toktogulov, the Ambassador of Kyrgyzstan to the United States, spoke before the screening and introduced the director Artykpai Suiundukov and the young actor Artur Amanaliev.

The White Ship (published in 1970) is a story of a young boy who grows up with his grandfather, Momun, on the shores of Issyk-Kul Lake in Kyrgyzstan. He spends time exploring, listening to legends from his grandfather, and looking out over the lake as white ships sail along. He finds particular interest in the stories that his grandfather tells him about the Horned Mother Deer that is sacred to the Bogo tribe. A series of tragedies occurs at the end of the novella, and a hunting party kills a sacred deer with Momun and the boy as witnesses. This sends the boy into despair. Longing for love and acceptance, he dives into the waters of a stream nearby to “turn into a fish” and swim towards Issyk-Kul in search of his father. A controversy surrounded the novel after publication due to its graphic and violent depictions of Soviet “heroes” as well as hints of child suicide.

Chingiz Aitmatov’s famous novella The White Ship was previously made into a film in 1976 during the time of the Soviet rule, when Kyrgyzstan was part of the former Soviet Union. It was filmed following the original story more closely and using Lake Issyk-Kul in Kyrgyzstan as a point of reference where the young boy keeps looking for his father out on a white ship on that huge lake in the mountains. In 2018, when Kyrgyzstan celebrated writer Chingiz Aitmatov’s 90th birthday, the Kirghiz Ministry of Culture decided to fund the production of a second film based on a different interpretation of The White Ship. As it turned out, the filmmaker Artyk Suyundukov had, almost a quarter of a century, dreamed of making a screen version of this story, and had on more than one occasion discussed his vision of the future film with Aitmatov himself when he was still alive. And Aitmatov had agreed on a screen version. The Kyrgyz authorities took this into consideration when deciding over the rights for a new screen version of the story.

In Suiundukov’s rendering of the story, the boy Shambala (played by Artur Amanaliev), the location of the story has been moved to a remote mountain region near a rushing river that flows into Lake Isaak Kul. He lives with the grandfather Momun (Nasret Dubashev) and his step-grandmother (Djamilla Sydykbaeva). His mother is dead and his father works on a large steam white ship that traverses Lake Issyk-Kul, but seems to have abandoned young Shambala entirely. In the film, we – like Shambala – never see this missing father, but only here of him. Shambala’s world in the mountains near the river consists of five persons, including his aunt Bekey (Taalaikan Abazova) who is childless and abused by her mean-spirited husband Orozkul (Talant Apyev) for being barren. The film is suffused with Kirghiz traditional beliefs and we encounter it from the beginning when grandfather prays to the Nature Spirit before cutting down a tree in the forest. By contrast the boy’s uncle Orozkul is chief of forestry in this region but has little respect for the forest, busily cutting down trees with his chain-saw and using his modern back-hoe loader to demolish brush and clear the forest. Young Shambala is closest to his grandfather who has a traditional respect for the forces of Nature, including his grandfather’s eagle (used for hunting) which Shambala attempts to set free.

In Suyundukov’s version of The White Ship, the boy received the name “Shambala,” which in Kyrgyz literally means “boy-candle” or “a boy emanating light.” The word “Shambala” is sacred in many parts of Asia. According to writer Nicholas Roerich, “Shambala embodies all the best human expectations and hopes. According to ancient sources, the Shambala is the mythological and spiritually pure land which is located somewhere in the territory of Tibet or the Altai. It is the land where people are reborn after death and live in harmony and peace.” However, Suyundukov’s film reflects today’s hopelessness of life in Kyrgyzstan, whose inhabitants have been badly impacted by modern industrial development and the arbitrariness of local bosses who are destroying the forests and rendering the red deer extinct from over-hunting. The old men, women and children are the most vulnerable parts of the population, as the men have gone off to work in urban factories.

It is the boy Shambala and his special relation to Nature that is the heart of the film. He sees the fish in the river swimming and imagines he could swim all the way to Lake Issyk-Kul to find his lost-missing father. Shambala sees the spirit of the forest in the sacred Horned Mother Deer, from which he believes his family is descended. It is visible only to his eyes. He sees in the yurt that his grandfather constructs for him the long tradition of nomadic life that is part of Kirghiz and Central Asian culture. In the forest, he finds a stone statue of an ancient Kirghiz goddess of fertility that he and his grandfather wish to protect but will be desecrated by greedy Orozkul. Finally, there is the hunt for the Horned Mother Deer in the forest by Orozkul and his buddies that will give Shambala the desire to escape from his present situation and fly away like an eagle from the Holy Mountain.