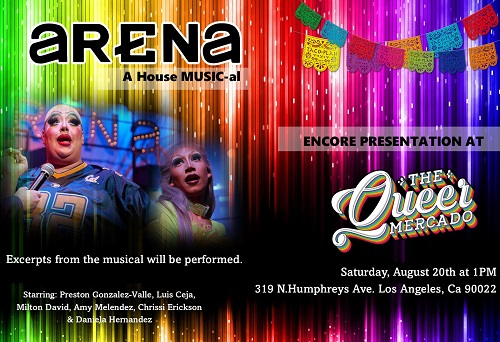 ARENA: A House MUSIC-al was recently presented and produced by CASA 0101 Theater, TNH Productions, El Centro del Pueblo and the Office of Councilmember Gil Cedillo.  Select Members of the Cast from the show who will be participating and performing at The Queer Mercado starting at 1:00 p.m. include actors, Preston Gonzalez Valle, Luis Ceja, Milton David, Chrissi Erickson, Amy Melendez and Daniela Hernandez, who will serve as Narrator.  The cast members will perform some brief excerpts from the musical.

Photo by José Miranda
1 of 5

In addition to the ARENA actors performing at The Queer Mercado, some of the work of Costume Designers for the show, including Jules Bronola, Tony Iniguez, Robert Ortiz of Royal Rubbish, and Bad Burro by Jose Huizar, will also be part of the presentation with a Fashion Show.

More About The Queer Mercado 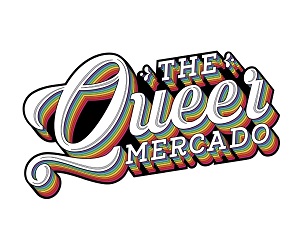 The Queer Mercado is the first permanent FREE LGBTQ+ marketplace in Southern California.  The event takes place on the third Saturday of each month on the Eastside of Los Angeles.  The purpose of the unique space is to uplift, celebrate and support new businesses and talent in and around East Los Angeles through a holistic approach in the marketplace/vendor community.  The intention is to create economic opportunities for Queer/LGBTQ+ community members, and specifically those that traditionally have not been afforded the opportunities to activate and elevate their brands, art and innovative ideas.

The Queer Mercado creates a safe space to engage the local community.  Vendor fees generated at the Mercado are donated to local high schools to engage youth in job training opportunities.  The Mercado helps to foster a welcoming environment for LGBTQ+ community members to ensure that they see themselves represented and celebrated in a supportive and loving community.