Venice, CA (The Hollywood Times) 7/3/2018 — The stars of GLOW were out and proud to kick-off the release of their second season at a launch party on Muscle Beach in Venice, CA.  This sisterhood of an ensemble cast glowed about working together, their writers who manage to balance the story lines of so many characters and becoming wrestlers.  Most of all, they raved about the honor and privilege of getting to do another season. 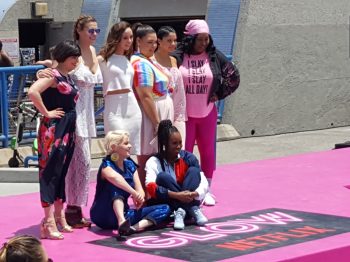 “We were over-the-moon when we got word of Season 2 of GLOW because we loved it so much in Season 1.”, recalls Jackie Tohn who plays Melrose.

“I’m just so proud of what we accomplished.”, Britt Baron who plays Justine reflects.

Many reflected on this large cast of women, almost never done before, and the bond that exists among them all.

Sydelle Noel, who plays Cherry, explained “These girls are really like my sisters.  I’m very fortunate to be on a set and work with girls that are actually so nice, and we just welcome each other.  We share a WhatsApp.”

“We are constantly on our app doing birthday gifts, cards, congratulating on another.  We are sickeningly in love.”, Kia Stevens describes as she shares the pink carpet with her cast mates.

Whether you are a fan of wrestling or have never watched it before, one of the great fun bits of this show has been watching these women train to become wrestlers both on and off-camera.  Now this band of actresses of all shapes and sizes all have been “bitten by the bug” as coined by Angelina Altishin, a.k.a. Little Egypt of the original Gorgeous Ladies of Wrestling.  She, along with fellow real G.L.O.W. alum Godiva (Dawn Maestas) stopped by to shout out their support for the show.  The two gave a powerful voice of credence to the show and the accuracy with which the writers depicted the lives of the real G.L.O.W. wrestlers even though the Netflix show is a totally fictional retelling.

Dawn “Godiva” Maestas said, “Their writers are so brilliant, they didn’t need our stories to come up with great stories.  The costuming is so beautiful, and so 80’s to the point where I was like, “I had that actual leotard.”

Little Egypt described, “I was really surprised at how they were playing the women in the show, and how they had to authentically fall in love with wrestling.  We got to watch them get bit by the bug, which is exactly what happened to all of us.

Kimmy Gatewood who plays Stacey Beswick recalls, “The first day of training was a forward roll, which we were all barely doing forward rolls.  Then, on the first day of Season 2 when we were back on-set we’re like, “Ok, so let’s do some forward three-quarter flips and just jump off the second rope and do a splash onto the pad.”

Britt Baron and Jackie Tohn shared similar memories of their own.  “I didn’t even know how to get into the ring.”, shares Britt.  Jackie adds, “Do I go through the bottom rope?  Do I jump?  Do I go through the middle?  But, now, we just know how.  You just go by your height”

THT – So, you’re ready to get in the ring for real now, right?

“No. I love wrestling, but I would respectfully have to bow out and say no.” Britney Young (plays Carmen Wade) admits.

“Never.”, Kimmy Gatewood immediately exclaims.  “I enjoy my safe, padded ring, with Chavo and my trainer watching me and making sure I don’t hurt myself.”

“Wrestling is really freaking hard.  You’re doing a lot to your body.”  Sydelle Noel a.k.a. Cherry on GLOW explains.  “But, it’s a new thing and I’m learning to love it.”

Each of the stars also gave a glimpse of what’s to come in Season 2 as the characters and story lines evolve and get more in-depth.

“For all the girls, you get to see a real peek into everyone’s life.”, Jackie Tohn reveals.  “As far as Melrose is concerned, she’s much more of a team player in Season 2, whereas in Season 1 she’s more out for herself.”

“I loved getting to know some of the characters better,” says Kimmy Gatewood.  “and, they really tackle some big issues.”

This is perhaps the overriding theme among the cast, that this show is so relevant to today despite taking place in the 80’s.  The diversity among the women in the cast, having the cast, writers and producers almost all be women, and the story lines that are all written from a woman’s perspective are all things that the cast raves about being a part of for the first time in their careers.  New cast member, Shakira Barrera, who plays a Latina LGBT character, speaks to the modern-day relevance of the show.  “I think, in 2018, it is so relevant to see people that are ethnic and a person-of-color in the forefront.  That is me, that is Sydelle, that is Britney Young…There’s not a lot of parts for us.  So, this show gives us a platform.  It gives us a voice, and it’s super-important at this time.”

No doubt, if the early reviews are any indication, there will be a Season 3 of GLOW.  So, these women will continue to blaze the new trails that they are carving.  Furthermore, they do so as writer/creators Liz Flahive and Carly Mensch do the same as female showrunners of, perhaps, the current marquee show on Netflix.