Violence amongst people does not require weapons or fists! It can be completely psychological. Such is the premise of Cairo Smith’s new feature-length independent film SCREWDRIVER starring AnnaClare Hicks, Charlie Farrell, Milly Sanders, and Matt Munroe.

SCREWDRIVER premiered at the close of this year’s Dances With Films Festival held from June 9th to June 19th at the TCL Chinese Theatre in Hollywood.

Hicks plays a vulnerable young woman drawn into a strange web of manipulation and control conducted by a married couple who were once her friends. 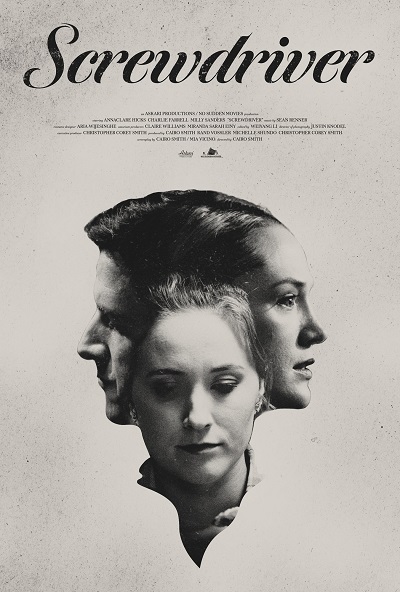 Director Cairo Smith was kind enough to respond to the following online interview.

THT: What inspired you to make a feature-length film about such a dark subject?

Cairo Smith: I was definitely drawn into the unsettling through other films, other pieces of art that I had seen along those lines which had made a large impression on me. Yorgos Lanthimos’ DOGTOOTH was an influence in many ways, although I think at the end of the day he and I take things in very different directions.

One thing that was very important to me was to play to our strengths as a micro-budget film, one of those strengths being the ability to delve into material that studio-tested IP might have a harder time exploring. That, and to really engage with a sort of domestic American id.

THT: What future do you foresee for the main character in SCREWDRIVER?

Cairo Smith: That’s a great question. I certainly have hopes for her. I would say that I hope she gets what she wants, and I think perhaps that ‘what she wants’ is a big part of what there is to figure out within the film.

THT: What films influenced SCREWDRIVER the most?

Cairo Smith:  As I said, DOGTOOTH was a big one. ROSEMARY’S BABY. QUEEN OF EARTH, which is just a fantastic piece and very intimate. I think QUEEN OF EARTH may have had a smaller on-set crew than us by total headcount, which is kind of nuts.

As far as the visuals, our director of photography Justin Knodel and I went through a lot of different references and pulled out things that we both loved to help craft the lighting and the camerawork. At times there’s kind of a Fincher stillness to it, a little GONE GIRL. At other times it’s much more Cassavetes, these dirty close-ups that are almost ECUs, drifting with the actors.

Overall those style blends are pretty subtle and pretty motivated, I would say. I think we found a great balance to tell the story in the way it needed to be told.

THT: What is your ideal audience for this film, if any?

Cairo Smith: I don’t think I would presume to say who should or shouldn’t be in the audience for SCREWDRIVER. Obviously, we have our marketing breakdowns, our demographics, and our comps, and you can look at the demos for our comp films and see where they were strong.

But I’d say, anyone who’s going to see the film and enjoy it, get something out of it, learn something from it about themselves or the world, I’d like it to be on their radar and I’d like for them to have a chance to see it and ‘meet’ me through it. Hopefully, that’s something that we can achieve to a significant degree with our distribution.

THT: Do you plan on making more films like this, or any others?

Cairo Smith: I already have a couple more films in various stages of development. I have an action thriller, STYGIANA, with some mind-bendy Egyptian occult themes. That one’s kind of a spiritual SCREWDRIVER sequel, in a weird way. It also looks like we’re heading into production soon for a script that I won the PAGE with, a screwball comedy about the making of the first STAR WARS film.